The Milky Way has collided and merged with multiple other galaxies over its long lifespan, but piecing together its history has been a painstaking task.

A new analysis of dense star clusters orbiting the Milky Way has now given us the most complete galactic merger history yet. And in those data is a previously unknown merger event that took place 11 billion years ago, and completely altered our galaxy's shape. Astronomers have named that galaxy - subsumed by the Milky Way - the Kraken.

The clusters of stars in question are called globular clusters, often considered "fossils" of the early Universe. They're very dense, spherical clusters of roughly 100,000 to 1 million very old stars, some nearly as old as the Universe itself. In any globular cluster, all its stars formed at the same time, from the same cloud of gas, which means we can use their chemical composition to work out their origins.

But that's only one part of the puzzle. The Milky Way has around 150 globular clusters, and working out and reconstructing their orbital motion, and their current shape (some are torn apart into long, stellar streams), can also help piece together where they came from.

And that's what a team of astronomers has now done, using an artificial neural network to simulate globular clusters orbiting Milky Way-like galaxies. These simulations, called E-MOSAICS, model the complete lifespan of globular clusters, from formation through evolution to destruction.

"The main challenge of connecting the properties of globular clusters to the merger history of their host galaxy has always been that galaxy assembly is an extremely messy process, during which the orbits of the globular clusters are completely reshuffled," said astronomer Diederik Kruijssen of the University of Heidelberg, Germany.

"We tested the algorithm tens of thousands of times on the simulations and were amazed at how accurately it was able to reconstruct the merger histories of the simulated galaxies, using only their globular cluster populations."

The next step was to feed the software real data. In recent years, the Gaia satellite has been working diligently to map the Milky Way galaxy with high precision and detail not just in space, but also time. This has given us the most accurate data yet on the positions and motions of galactic objects, resulting in some fascinating discoveries about our home galaxy.

Using the Gaia data, the team grouped together globular clusters based on their orbital motion. That's because the clusters that have similar orbits around the Milky Way are thought to have come from the same place; that is, a galaxy that was subsumed by the Milky Way at some point in its past. 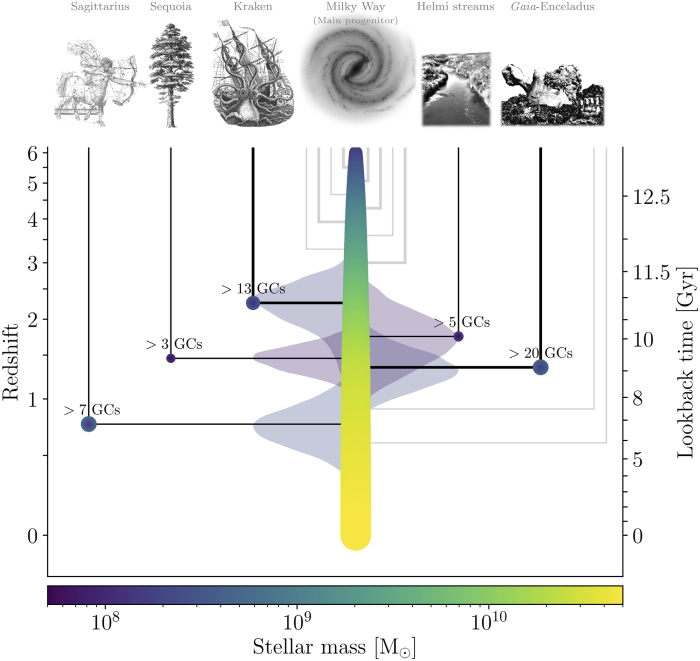 When these data were processed by the team's software, the results closely agreed with five galactic collisions.

The fifth event was pieced together from a recently discovered group of "low energy" globular clusters. According to the software's analysis, these all closely match the properties of a previously unknown - and highly important - collision with what the team has dubbed the Kraken galaxy.

"The collision with Kraken must have been the most significant merger the Milky Way ever experienced," Kruijssen said.

This tree should form the basis for ongoing and future efforts to understand the epic events that changed our galaxy's history.

"The debris of more than five progenitor galaxies has now been identified," Kruijssen said. "With current and upcoming telescopes, it should be possible to find them all."