The Ocean Has Released an Insane Amount of CO2, And No One Even Noticed

A researcher at work in Shark Bay. (Paul Lavery)

Our planet's climate is built on a whole host of interlinked chemical reactions and counter-reactions, and we just learned about another: an underwater heatwave has triggered a worryingly huge release of CO2 from Amphibolis antarctica seagrass off north-western Australia.

Vast tracts of these flowering marine plants were killed by the stress of living in waters that were 2-4 degrees Celsius (3.6-7.2 degrees Fahrenheit) warmer than normal back in the summer of 2010-2011, researchers have found.

More than a third of the seagrass meadows were potentially affected. And no one really noticed.

And the findings have very real implications for the kind of self-perpetuating heat rises we could be in for, say the international team of researchers, as too much carbon dioxide in the atmosphere warms the planet and leads to the release of even more greenhouse gases. 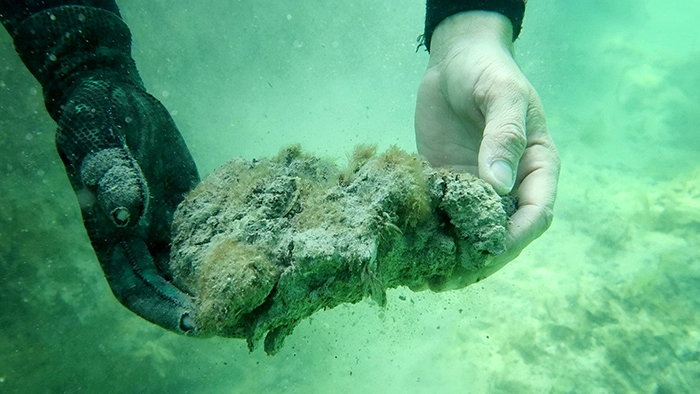 Losing seagrass is a double whammy for our environment's health – not only do we lose the plant's ability to capture and store CO2, all the CO2 that's already being stored gets released back out into the ecosystem.

"This is significant, as seagrass meadows are CO2 sinks, known as Blue Carbon ecosystems," says one of the team, Pere Masqué from the Universitat Autònoma de Barcelona (ICTA-UAB) in Spain.

"They take up and store carbon dioxide in their soils and biomass through biosequestration. The carbon that is locked in the soils is potentially there for millennia if seagrass ecosystems remain intact."

The new study estimates some 1,000 square kilometres (386 square miles) of seagrass meadows could have been wiped out in the years up to 2014.

Samples from 50 different sites and soil modelling calculations were used to estimate how much seagrass disappeared.

And what seagrass remained was sparser – the researchers logged a drop in the seagrass cover from 72 percent, which was classified as 'dense', in 2002 to a 'sparse' 46 percent in 2014.

As oxygen penetrates the layers of the dead seagrass, the chemical mix of bacteria changes, releasing carbon that is otherwise stored in sediment.

In total that would've equated to the release of around 9 million tonnes of carbon dioxide (CO2) into the atmosphere. That's about the same as you would get from 1.6 million cars driving around for a year.

"It's a carbon bomb," one of the team, Gary Kendrick from the University of Western Australia, told Michael Slezak at The Guardian. "And it's one that has gone off without documentation."

"If we're not counting this carbon, then we're underestimating our footprint."

The Shark Bay region we're talking about is one of the largest remaining seagrass ecosystems on Earth – about 1.3 percent of all the CO2 stored by seagrass across the world is stored here.

Coastal development, poor quality water, and even anchors from boats can also damage the ability of the seagrass to sequester carbon.

It's a bleak picture: seagrass meadows can be restored, but it takes a lot of time and costs a lot of money.

Plans are now underway to work out how to help the area recover, perhaps by removing dead seagrass (which can hamper regrowth) and planting new seedlings.

Even so, it's important to emphasise the urgency in reducing greenhouse gas emissions and stopping adverse feedback loops like this from happening, say the researchers – otherwise dying seagrass will be giving up more CO2 than healthy seagrass can take back.

"With climate change forecast to increase the frequency of extreme weather events, the permanence of these carbon stores is compromised," says one of the team, Ariane Arias-Ortiz from ICTA-UAB.