We've written about some truly stunning deep space pictures here on ScienceAlert, but a new Hubble snap showcasing a special collection of five galaxies has to be one of the best yet – even by our high standards.

The group of galaxies is called the Hickson Compact Group 40, and they're unusually close together at the point in space and time that's been captured by the image. In around another billion years or so, they will all collide together to form a giant elliptical galaxy.

What you're looking at are three spiral-shaped galaxies (with the orange dust clouds), an elliptical galaxy (nearer the top, showing light from billions of stars), and a lenticular or lens-like galaxy (towards the lower right). 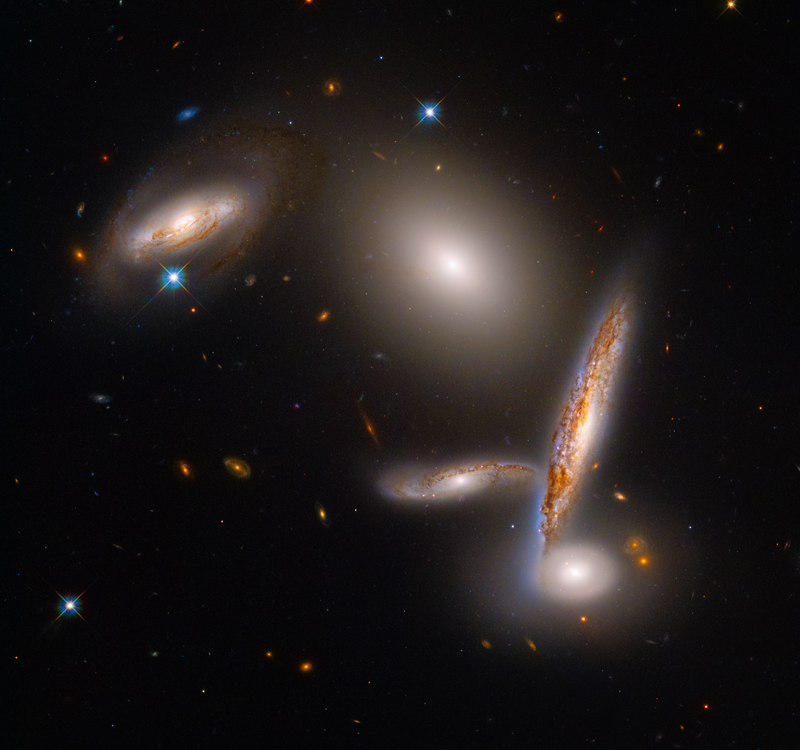 While dense groups of galaxies aren't rare, they're typically found at the hearts of much larger clusters.

What's special is that this unusually dense galactic huddle, sitting somewhere in the direction of the constellation Hydra, isn't part of a larger crowd. You can see many other galaxies in the background of the image, looking fainter against the backdrop of space.

Astronomers have been tracking the Hickson Compact Group 40 in different spectra of light, with X-ray readings revealing that the galaxies are having gravitational effects on each other, due to the presence of enormous amounts of hot gas in the space between them.

That will eventually lead to their merger, and scientists think dark matter could be playing a part, forming a cloud around the galaxy group and slowing the individual galaxies down. As they lose energy, the thinking goes, they fall together as shown in this picture.

Studying densely packed groups like this – all five galaxies in this image would fit inside two Milky Ways – helps astronomers to understand the where and the when and the how questions surrounding galaxy formation.

"I remember seeing this on a sky survey and saying, 'wow look at that!'" says astronomer Paul Hickson, from the University of British Columbia in Canada, who rediscovered the group in 1982.

"All that I was using at the time was a big plastic ruler and a magnifying glass while looking over sky survey prints."

The Hubble Space Telescope has given us a much clearer look at the cosmos than we had in 1982, and this image has been released to celebrate the anniversary of the telescope's 32nd year of operation – it was deployed into orbit on 25 April 1990.

Since then, it's captured some 1.5 million snapshots of around 50,000 celestial objects, all stored and accessible by the public. We can expect plenty more stunning pictures to appear from Hubble in the years ahead, too.

You can see the full image at larger resolutions on the official NASA website.