Massive Landforms Have Just Been Discovered Under The Antarctic Ice Sheet

Scientists have discovered massive landforms lurking under Antarctica - some as tall as the Eiffel Tower - and they've been actively carving deep channels into the ice flow above.

These landforms, which are five times bigger than those left behind by former ice sheets in Scandinavia and North America, are now thought to be contributing to the thinning of the Antarctic ice shelves, and that could have big consequences for the region's stability.

Thanks to ancient ice sheets in the Northern Hemisphere that have long since retreated, scientists knew that landforms can grow for many metres below the surface.

The Scandinavian Ice Sheet was one of the largest glacial masses of the Pleistocene epoch (2,588,000 to 11,700 years ago), and in its prime, covered most of northern Europe in ice spanning about 6.6 million square kilometres (2.5 million square miles).

Below the ice sheet, which was about 3,000 metres thick (9,800 feet), various landforms began to take shape, and for thousands of years, they mitigated a complex cycle of evaporation and precipitation to keep the ice cycling through the ocean.

Now that Scandinavia's ancient ice sheet has retreated, these strange landforms - called eskers - have been exposed.

You can see some similar landforms left behind by an ancient ice sheet in western Sweden below: 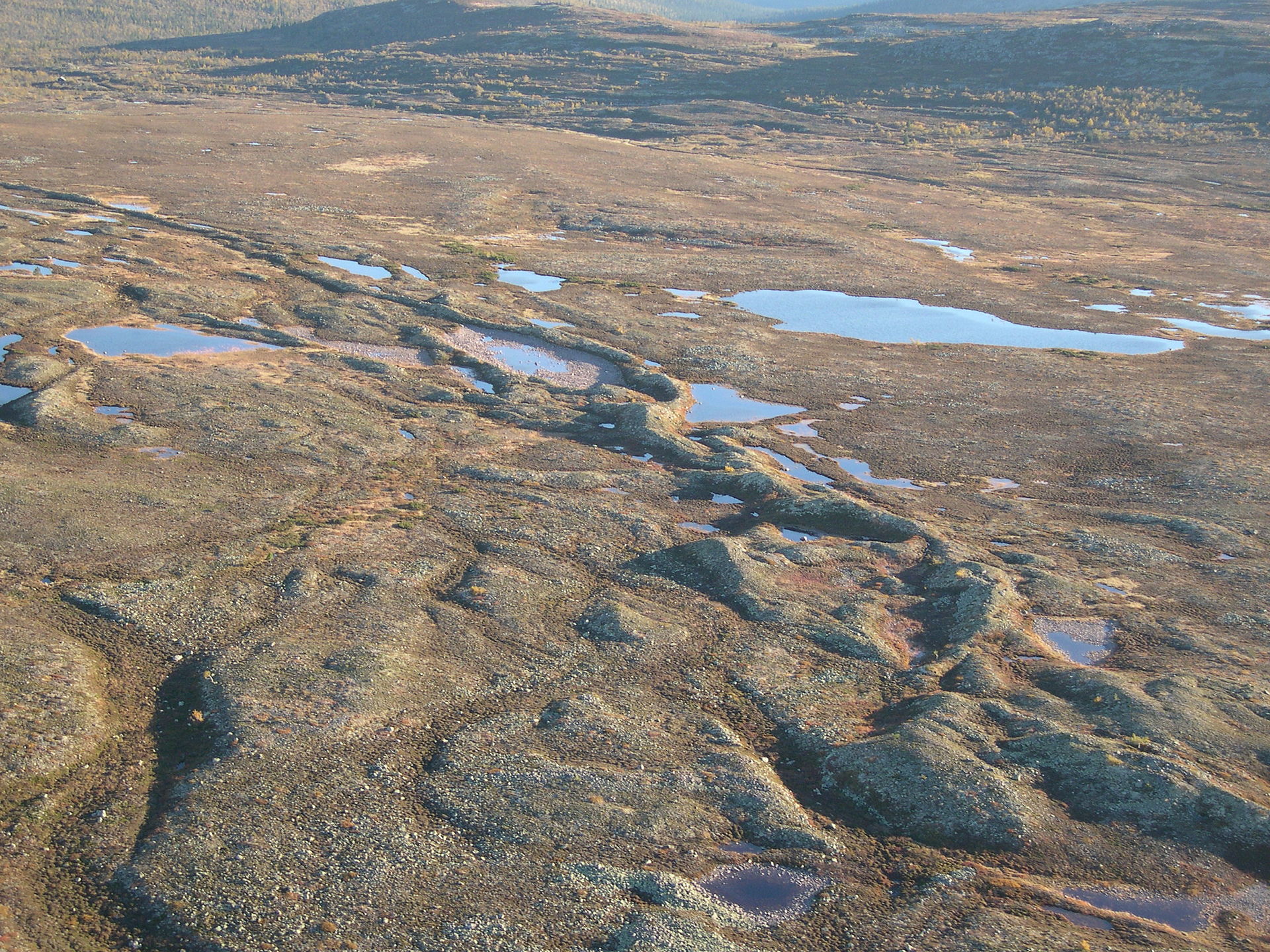 Scientists have long suspected that similar features could be lurking under our current ice sheets, but no one could have prepared researchers from the Université libre de Bruxelles in Belgium and the Bavarian Academy of Sciences in Germany for what they would find under Antarctica.

At five times the scale of the landforms left behind by the Scandinavian Ice Sheet, the landforms that lie beneath the Antarctic ice sheet dwarf any structures of their kind found on Earth, and they've helped scientists piece together what's actually going on down there.

They were identified during a survey of three subglacial locations at the Roi Baudouin Ice Shelf in Dronning Maud Land, Antarctica, where meltwater is let out into the surrounding ocean.

Using a combination of satellite imagery and airborne and ground-based radar data, the team identified distinct "radar reflectors" below the ice sheet.

Those reflections appear to be indications of large, ridge-shaped protrusions cutting into the ice flow above that look a whole lot like the ancient eskers of Scandinavia - except that these ones are seriously oversized.

So how did these massive landforms come to be?

The researchers investigated features known as subglacial conduits, which form under large ice sheets and funnel meltwater out towards the ocean, and found that they become considerably wider the closer they get to the the ocean.

This widening allows for the accumulation of sediments over millennia, which give rise to the formation of eskers, they suggest.

"As the conduits widen, the outflow velocity of the subglacial water decreases, which leads to increased sediment deposition at the conduit's portal. Over thousands of years, this process builds up giant sediment ridges - comparable in height with the Eiffel tower - below the ice," the team explains in a press release.

"Active sedimentation in subglacial water conduits seems to drive the formations of eskers - elongated ridges of gravel which are commonly observed today in areas where former ice sheets have retreated."

These relatively sharp-edged formations are thought to be constantly cutting into the ice flow above, creating ice-shelf channels that remain in the ice as it floats for hundreds of kilometres downstream.

These deep gashes render the ice half as thick as the uncut ice surrounding them, creating weak spots that are more severely affected by exposure to warmer ocean water.

This is important, because researchers had assumed that ice shelf thinning only happens once the ice hits the ocean, but the discovery of massive landforms carving up the ice from below means the instability can occur much earlier on in the process - and while it's still on land.

With meltwater now streaming across Antarctica, and a massive rift in the Larsen ice shelf growing rapidly, it's crucial that scientists figure out what's going on across the surface of the continent, and down below.

We might not be able to stop the thinning of the Antarctic ice sheet, but a better understanding of how it happens could at least help us to predict what will happen next.