Megalodon, the largest species of shark ever to have existed in Earth's history, likely had a somewhat gruesome method for getting a head start in life.

According to new research, the pups of the Megalodon shark (Otodus megalodon) are larger than most humans when they're born. This suggests that they hatched in the womb and were born live - and, like modern sharks that give birth to live young, grew by eating their unhatched siblings in utero.

"Results from this work shed new light on the life history of Megalodon, not only how Megalodon grew, but also how its embryos developed, how it gave birth and how long it could have lived," said palaeontologist Martin Becker of William Paterson University.

We have lots of evidence of Megalodon in the fossil record. The giant beasts lived from 23 million to around 3.6 million years ago, dominating the ocean.

And, since sharks continuously shed and regrow teeth for their entire lives - going through up to 40,000 teeth before they die - palaeontologists have found lots of Megalodon teeth in ancient fossil beds to study.

But that's basically all they have found. Shark skeletons are cartilage, not bone, so pretty much all we know about Megalodon has been inferred from studying its giant chompers. For example, based on the size of its teeth, we know that Megalodon grew up to around 15 metres (50 feet) long, with an open jaw up to 3.4 metres (11 feet) tall.

However, while teeth constitute the bulk of the Megalodon fossil record, some vertebrae have also been retrieved. And it was from several of these vertebrae, housed in the Royal Belgian Institute of Natural Sciences in Belgium, that scientists were able to learn more about the early lives of these mysterious animals.

You see, as sharks grow, so too do their vertebrae, in layers deposited on what is thought to be an annual basis, much like tree rings. So, the team selected 15 vertebrae thought to be from the same shark and subjected them to X-ray micro computed tomography.

Previous analysis of these vertebrae suggested the individual was about 9 metres long when it died. The team added to this knowledge by counting the growth rings, determining that the Megalodon was also around 46 years old when it died.

Then, they looked more closely at the largest vertebra, looking for the telltale angle change in the growth rings that takes place at birth. From this, they were able to determine how large the vertebra was when the shark was born - and, from that information, infer the size of the newborn shark. 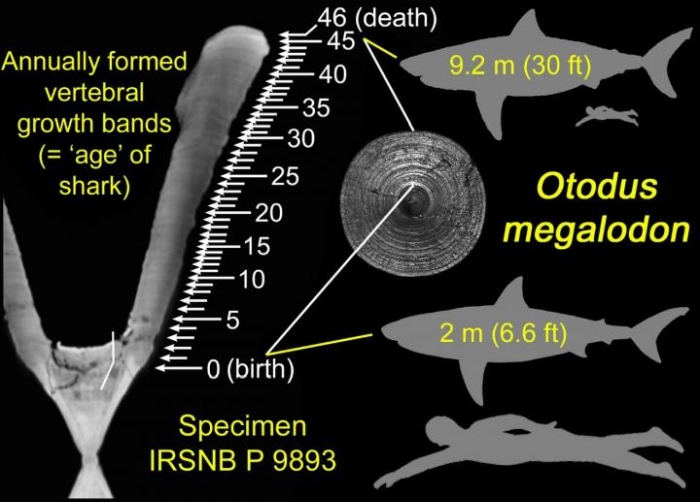 The pup, they found, was huge - around 2 metres (6.6 feet) long at birth. This is possibly evidence of the largest shark pup ever to exist - but, importantly, it also suggests that megalodon pups were born live.

Although most modern sharks lay eggs, there are some that do give live birth. These are the Lamniformes, an order that includes mako sharks (genus Isurus), thresher sharks (family Alopiidae), and the infamous great white (Carcharodon carcharias).

And this also gives us some clues to the gestation and birth of Megalodon sharks - because sometimes foetal Lamniformes devour their unborn siblings in utero, an intrauterine cannibalistic behaviour.

Unborn shark pups have even been seen swimming between their mother's two uteri to conduct this cannibalism. They can then turn their ravenous attention to their mother's unfertilised eggs in a practice known as oophagy.

Some even take it a step further; pups of the grey nurse shark (Carcharias taurus) will eat each other after birth, too.

This, of course, results in fewer live young, but the sharks that do survive are thought to have a greater survival advantage, since they are born larger and stronger than if they hatched out in the open, and didn't partake in a prenatal cannibalistic feast.

Knowing this about Megalodon can help contextualise its place in the shark family tree; but it also helps better understand how the shark fit into its wild watery world. For example, knowing how they are born could shed some light on the way Megalodon used nurseries, and how it competed with other prehistoric sharks.

"As one of the largest carnivores that ever existed on Earth," said palaeobiologist Kenshu Shimada of DePaul University, "deciphering such growth parameters of O. megalodon is critical to understand the role large carnivores play in the context of the evolution of marine ecosystems."