It's not just ink particles and contaminants that can travel through your body when you get tattooed. Researchers have now found that metal nanoparticles from the tattooing needles can get left behind, too.

These particles - shed from the needles used to puncture your skin and deposit the ink - include nickel and chromium, which are allergens. So they could induce allergic responses previously attributed only to the inks.

"There is more to tattoos than meets the eye," said environmental scientist Hiram Castilla of the European Synchrotron Radiation Facility (ESRF).

"It is not only about the cleanliness of the parlour, the sterilisation of the equipment or even about the pigments. Now we find that the needle wear also has an impact in your body."

Although we humans have been decorating our bodies with pigment deposited under the epidermis for thousands of years, little research has been done on what effect that ink has on our bodies.

Most of it does stay put, since the ink particles are too big for our immune systems to break down. But as ESRF scientists discovered last year, a very small amount of the minutest particles do actually get removed by the immune system, moving through the body before being deposited in the lymph nodes.

It's well known that tattoos can cause adverse reactions in some people. Sometimes the host will have an allergic reaction, or develop hypersensitivity at the site of the tattoo. Sometimes, tattoo pigments in the body can later cause symptoms similar to those of lymphoma and melanoma.

In this case, the team was primarily investigating the allergens chromium and nickel, as well as iron. Their previous research turned up nanoparticles of the metals in their subjects' lymph nodes, so they were trying to find the link between these metals and the pigments used in tattoo inks.

"After studying several human tissue samples and finding metallic components, we realised that there must be something else," said Ines Schreiver of the German Federal Institute for Risk Assessment.

"We also tested around 50 ink samples without finding such metal particles and made sure that we hadn't contaminated the samples during sample preparation. Then we thought of testing the needle and that was our 'eureka' moment."

You can see how brutal the tattooing process looks up close in this awesome slow-motion footage from Smarter Every Day.

The hard, dense titanium dioxide acts as a harsh abrasive that scrubs away particles of the metal needle, a process that does not occur when the artist uses softer carbon black ink.

You can clearly see below that the titanium dioxide needles are a lot more worn than the carbon black ones. 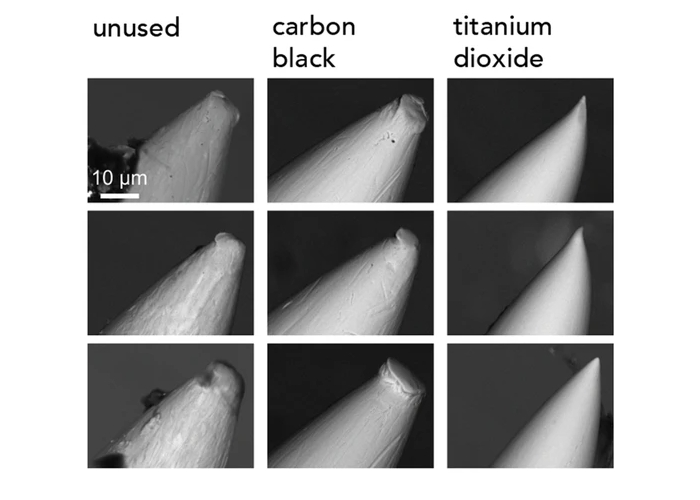 "It is beyond doubt that the metal particles derive from the tattoo needle as result of pure mechanical grinding," said Bernhard Hesse of the ESRF.

It's the first time researchers have demonstrated that this is occurring, so we don't yet know what this discovery might mean in health terms. Further research will be needed to determine what impact needle nanoparticles are having when it comes to adverse reactions that can arise from tattoos.

As always, we recommend that you do your homework before getting inked - find a reputable studio and, if you can, find out which inks they use so you can check the ingredients for yourself.

The team's research has been published in Particle and Fibre Toxicology.