One potential use for drones that you might not have thought about is preventing the spread of disease. Microsoft has just launched an initiative called Project Premonition, with the aim of detecting viruses before they infect a significant number of people using a fleet of Unmanned Aerial Vehicles (or UAVs).

In remote areas where dengue fever or malaria can take hold, the impact of drone technology and number of saved lives could be huge. The key is in catching mosquitoes and analysing the diseases they're carrying: "The mosquito is the most dangerous animal on the planet, because it carries so many pathogens," Microsoft researcher Ethan Jackson, who is leading Project Premonition, told Allison Linn over on the company's blog. "What we want to do is to be able to catch that mosquito efficiently, at scale and at low cost."

Right now, scientists attempt to do this by using traps hung from trees that must be collected by hand. But Microsoft's new plan could greatly speed up this process and make it a lot cheaper, by sending out portable drones that are able to cover far more distance and come back to base with bigger samples.

This would allow scientists to not only monitor the spread of known diseases carried by mosquitoes, but also detect emerging viruses and epidemics before they begin to spread. To do this, they're developing software that will be able to quickly and accurately process genetic data collected by their mosquito-hunting UAV fleet, giving researchers a better idea of the viruses that are out there and how they're spreading.

It all sounds a little far fetched, but Microsoft carried out a feasibility study in Grenada in the Caribbean in March, and presented its findings at the Microsoft Innovation TechFair in Washington, DC last week. The company now says it's working with academic partners across multiple disciplines to make Project Premonition a reality within the next five years.

Getting advance warning of a potential epidemic is crucial in stopping or limiting it. Vaccines and health clinics can be up and running earlier, and any necessary travelling restrictions can be put in place before the situation worsens. "The ability to predict an epidemic would be huge," Douglas Norris, a professor of molecular microbiology and immunology at Johns Hopkins Bloomberg School of Public Health in Maryland, told Linn.

As part of his work, Norris often finds himself working in remote areas using mosquito traps that haven't changed much since the 1950s or 60s. They use expensive batteries and chemicals that are difficult to source, and indiscriminately collect plenty other bugs besides mosquitoes - there's huge room for improvement in terms of the technology and its efficiency, and that's where Project Premonition comes in.

In order for the scheme to be a success, the drones will need to operate semi-autonomously as well as being directed by a human pilot: having the ability to navigate environments on their own ensures they can travel greater distances and cover more land. All that extra functionality requires more research and programming of course, but the Project Premonition team is optimistic about its chances. Mirosoft is also developing these mosquito traps, which will be attached to the drones: 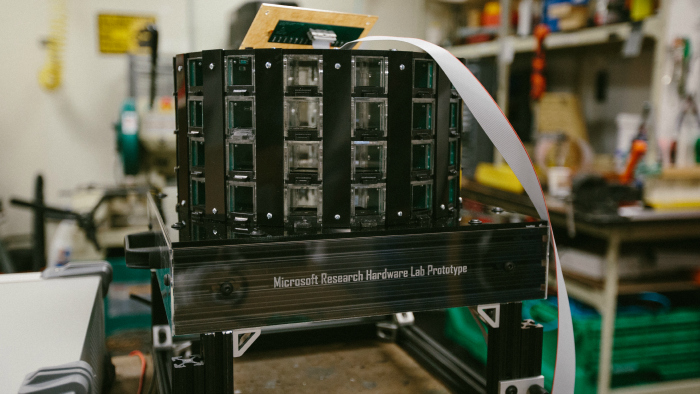 What's more, thanks to the latest advancements in molecular biology and genetic sequencing, samples can be processed faster and more cheaply than ever - they can even spot viruses that haven't been classified yet. By developing cloud databases and algorithms to store all of this data, the researchers behind Project Premonition hope to build a robust system capable of spotting dangers to humans and wildlife alike in the future.