'The launching of this bottle into the cosmic ocean says something very hopeful about life on this planet,' said Carl Sagan upon the launch of the Voyager probes back in 1977.

Now, 40 years on, the two spacecraft are still speeding away from our little pale blue dot of a planet. It's humanity's farthest and longest space mission to date - and one whose anniversary is well worthy of stunning new posters by NASA.

To honour the mission, NASA is hosting a public event on 5 September at the National Air and Space Museum. And true to their style, the agency has also released posters so we can all participate in spreading the word about the Grand Tour of the Voyagers.

Originally, the twin spacecraft set out on an unprecedented trek to the two gas giants - Jupiter and Saturn. From there, Voyager 1 went on to sail farther out of our Solar System until, in 2012, it became the first (and so far only) spacecraft to enter interstellar space.

Meanwhile Voyager 2 swung by the outermost planets, Uranus and Neptune, becoming the only spacecraft to visit all four of the ice and gas giants in our solar neighbourhood.

The probes discovered never-before seen features on many of the moons of the distant Solar System, including active volcanoes on Jupiter's moon Io, and the ice geysers on Neptune's moon Triton.

But apart from all the records and scientific discoveries, the Voyager mission is also known for the message they carry "into the cosmic ocean" - the two Golden Records which carry sounds, sights, and songs from Earth, perhaps one day to be heard by another spacefaring civilisation out there.

In homage to these records, NASA has released a fun poster reminiscent of the best 70s disco era artworks, listing some of the 'greatest hits' of the mission: 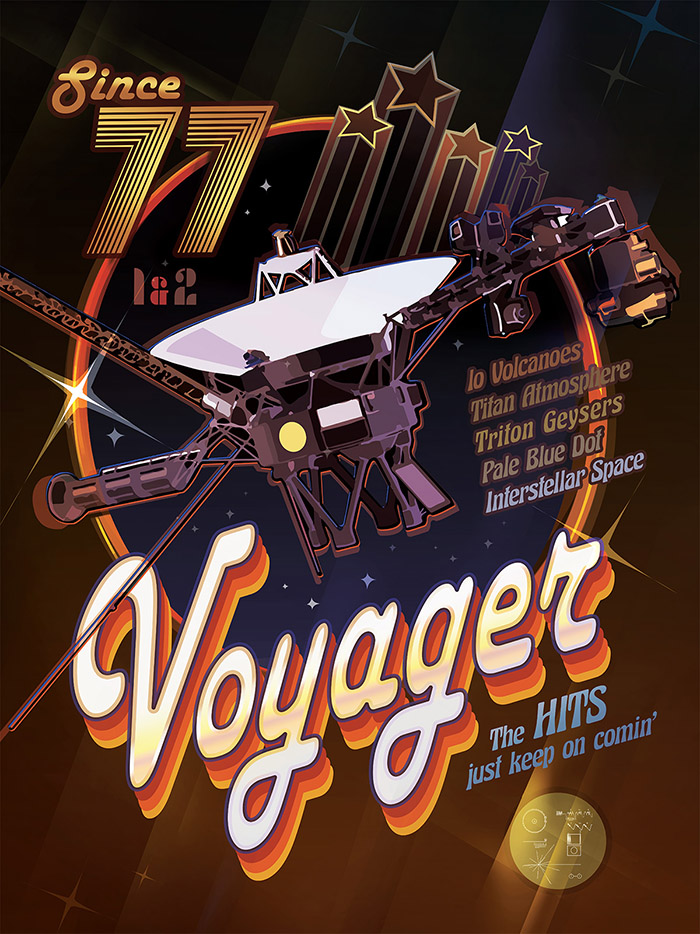 But if disco kitsch isn't quite your cup of tea, there's also a more poetic take. In 1990, when Voyager 1 was already 6 billion kilometres away and due to switch its cameras off forever, it turned around and took one last photo.

That picture shows Earth as a tiny pixel across the vast expanse of space, as seen from a spacecraft which was already drifting beyond even Pluto. You may know this picture as the Pale Blue Dot, as famously coined by Carl Sagan.

And even now, both spacecraft continue to sail farther and farther away from that dot, with one of them already out there in the vast interstellar space beyond the winds of our home star.

They are "destined to continue orbiting the centre of our galaxy for billions of years after they stop communicating with Earth," says NASA. So it's only right that the second of the commemorative posters captures the spirit of exploration: 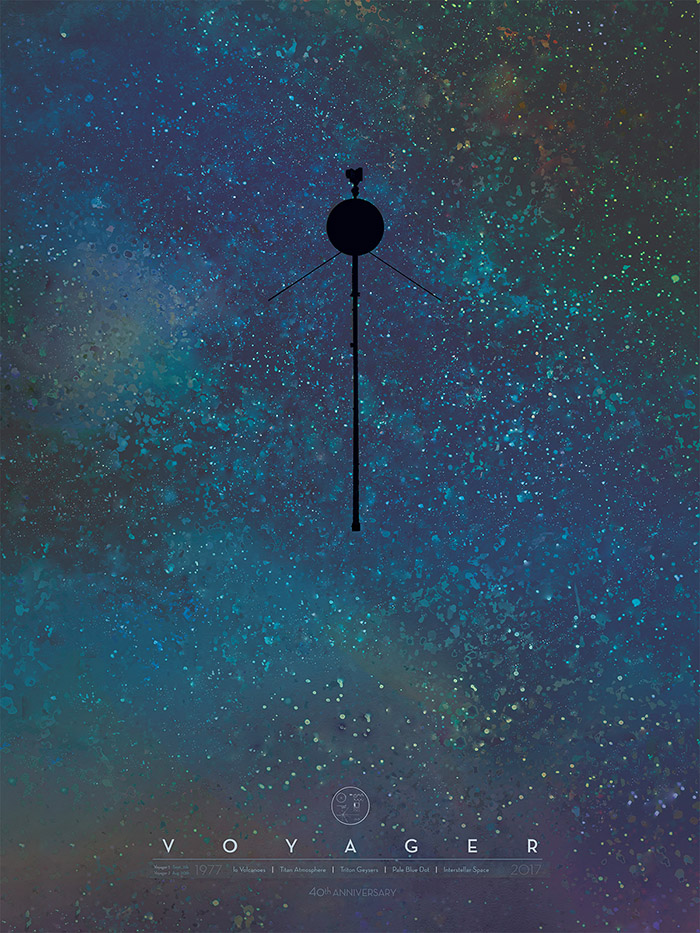 These two artworks join NASA's already vast collection of space tourism posters that anyone can download and print to their heart's desire.

Apart from the Voyager commemorative posters, there's the exoplanet travel series, our own Solar System travel series (including the Grand Tour of the Voyagers, below), and the infinitely cool take on the TRAPPIST-1 system. You can see bigger versions and find all printable Voyager downloads by NASA here.