NASA's OSIRIS-REx is getting closer, physically and temporally, to its primary goal. The spacecraft arrived at Bennu at the end of 2018, and for just over a year it's been studying the asteroid, searching for a suitable sampling site.

To do that, it's getting closer and closer.

OSIRIS-REx stands for Origins, Spectral Interpretation, Resource Identification, Security-Regolith Explorer. The heart of the mission is the sample it'll collect from asteroid Bennu. That sample will eventually make its way back to Earth for study.

The OSIRIS-REx team selected a sampling site very carefully. When the spacecraft arrived at asteroid Bennu, NASA found that the surface of the asteroid was more challenging than they thought. Though the surface contains an abundance of the right sized material for the spacecraft's sampling mechanism, there are plenty of hazards to be avoided.

Eventually, the OSIRIS-REx team came up with a list of four potential sampling sites. They then did more fly-overs of the four, to take an even closer look.

From there, they chose two sampling sites: a primary site and a secondary site. All four of the sites received avian-themed names, and at the end of the process, NASA chose Nightingale as the primary site, and Osprey as the backup site.

Throughout the site selection process, OSIRIS-REx reconned Bennu in three phases: Recon A, B, and C. During each phase, it got progressively closer to the surface, gathering more detail on each site.

Now, in recon phase C, the spacecraft has performed its closest flyover yet. On March 3rd, it flew over Nightingale at an altitude of only 250 meters (820 ft).

The spacecraft's safe-orbit height is one km (0.6 miles), but for about five hours, OSIRIS-REx left that safety behind. The Nightingale site is in a crater, and it's about 16 meters (52 feet) wide. During the maneuver, all of the science instruments were aimed at the sampling site.

While all of the science instruments were operating, this flyover is mostly about the spacecraft's PolyCam imager. PolyCam is a 20.3-cm (8-inch) telescope, and the closer it gets to Bennu, the higher resolution images it acquires.

After the flyover OSIRIS-REx returned to its safe home orbit, but in the opposite direction. Now it's ready for its next big maneuver, the sampling rehearsal.

There'll be two sampling rehearsals, and the first one is scheduled for April 15. The spacecraft will make its closest approach then, coming to within 125 meters (410 feet) of Bennu's surface. But it's not done there.

At that altitude it'll perform what's called the Checkpoint maneuver. It'll descend even closer to the Nightingale site, and after descending for about 10 minutes, it'll stop its descent at 50 meters (164 feet) and begin backing away from the asteroid. 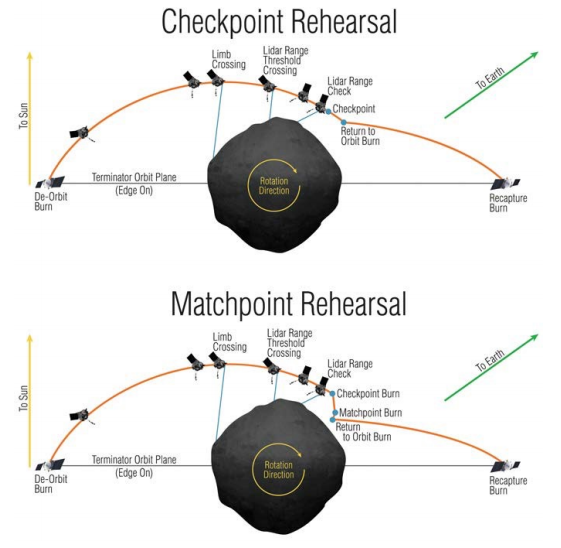 Then in June OSIRIS-REx will perform its second rehearsal. But this time, it'll get just a little closer, to between 25 to 40 meters (82 to 131 feet) before backing away.

As OSIRIS-REx performs each approach, it'll be gathering more data on the sampling site. It'll also be "training" its Natural Feature Tracking ( NFT) system. The NFT uses images of Bennu's surface to guide itself, comparing onboard images with real-time camera input to avoid hazards and nail its sampling operation.

The actual sampling maneuver is scheduled for late August 2020. At that time, OSIRIS-REx will come close enough that its sampling mechanism touches the surface. Then it'll fire a charge of nitrogen gas to kick-up some regolith, and capture some of it. Then it'll back away.

If the first attempt at Nightingale doesn't work, OSIRIS-REx can either try and collect from Nightingale again, or move to the backup site, Osprey.

Eventually, if all goes well, OSIRIS-REx will return to Earth and release the Sample Return Capsule (SRC) into Earth's atmosphere, where it will deploy a parachute and float down to the surface. It's expected to land at the Utah Testing and Training Range, where it will be retrieved.