Nearby Planetary System Could Hold a Habitable Super-Earth, Astronomers Say

A star just 35 light-years away has been found to host a number of rocky exoplanets, and one that has a good chance of habitability.

Around the red dwarf L 98-59 orbit at least four planets, and the system looks to be fascinating. New observations confirm what prior research had already suggested – the existence of a terrestrial world with half the mass of Venus.

But the new observations also reveal new worlds in the same system, including an ocean planet, and what seems to be a super-Earth bang in the middle of the star's habitable zone.

"The planet in the habitable zone may have an atmosphere that could protect and support life," said astrophysicist María Rosa Zapatero Osorio of the Centre for Astrobiology in Spain.

The discoveries mark a pretty big milestone, not just in our search for potentially habitable worlds, but also our search for rocky exoplanets like Earth, Mars, and Venus, since the small half-Venus represents a technical breakthrough.

It's the least massive exoplanet ever measured by examining its gravitational effect on the position of the star.

Although there are potentially many more exoplanets out there in the Milky Way than there are stars, to date we've only conclusively found and identified a few thousand of them.

That's because they're a lot smaller and dimmer and harder to see. Our most prolific methods therefore work best on more massive exoplanets that are relatively close to their stars.

Most exoplanets are discovered using the transit method. This is where a telescope such as Kepler or TESS (or, in the case of L 98-95's initial research, the Carnegie Planet Finder Spectrograph) stares at a patch of sky and looks for repeated, regular dips in starlight as an orbiting exoplanet transits between us and the host star.

The radial velocity method, on the other hand, looks for changes in a star's position. This is because planets exert a very small gravitational pull on their stars, causing them to move around a little in a mutual orbit (the Sun does this too). The more massive the exoplanet, the more pronounced the signal.

The L 98-59 system was discovered in 2019, with three planets orbiting the star, using the exoplanet-hunting space telescope TESS, which relies on the transit method. This can supply some information about the exoplanets themselves, such as a rough size estimate based on the amount by which the starlight dims.

Radial velocity measurements can add more information. Based on how much the star moves, astronomers can calculate the exoplanet's mass. Once they know the mass and size of a planet, they can calculate its density, which means we can take a good punt at determining its composition: denser exoplanets are likely rocky, while fluffier ones are likely gaseous.

"If we want to know what a planet is made of, the minimum that we need is its mass and its radius," explained astronomer Olivier Demangeon of the University of Porto in Portugal.

A team of astronomers led by Demangeon used the European Southern Observatory's Very Large Telescope to conduct radial velocity measurements of the star L 98-59. They confirmed that the innermost exoplanet, L 98-59 b, was around half the mass of Venus, and likely rocky.

The second-innermost exoplanet, at 1.4 times the size of Earth, is also likely rocky.

The third exoplanet is about 1.5 times the size and twice the mass of Earth, with a density profile, the researchers found, that suggests high water content. As much as 30 percent of the exoplanet's mass could be water, which would make it an ocean world.

Surprisingly, the team's radial velocity measurements registered two periodic signals that didn't match any of the known exoplanets. These suggested two more exoplanets in the system that don't orbit in the same plane as the others, so they don't actually transit.

The first has a mass of around three times that of Earth, and an orbital period of about 12.8 days. The second, more tentative detection is really interesting, though.

"We have hints of the presence of a terrestrial planet in the habitable zone of this system," Demangeon said. 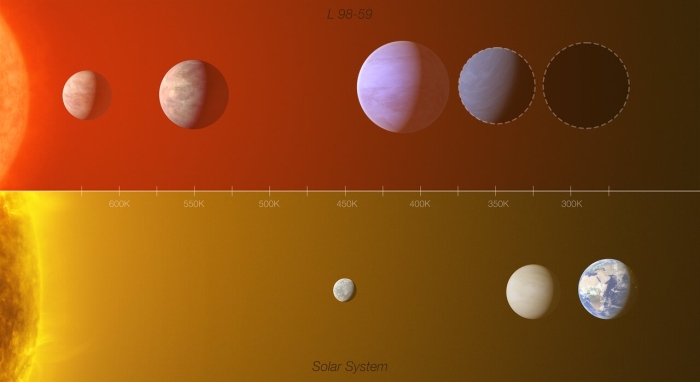 Comparison of the temperatures of L 98-59 and the Solar System. (ESO/L. Calçada/M. Kornmesser)

The fifth exoplanet, if it can be confirmed, seems to clock in at 2.46 times the mass of Earth, with an orbital period of about 23 days. This may seem too close for comfort, but because red dwarf stars are much cooler than the Sun, this means that the exoplanet would be at a temperate distance from the star – not too hot (nor too cold) to support life as we know it.

Unfortunately, we would need a transit to be able to see if the exoplanet has an atmosphere, which means it's not a great candidate for follow-up study in the search for habitability.

But it does show that planetary systems can hide a lot of tricks up their sleeves – and we could take a closer look at the inner exoplanets to study planetary system diversity.

"This system announces what is to come," Demangeon said.

"We, as a society, have been chasing terrestrial planets since the birth of astronomy and now we are finally getting closer and closer to the detection of a terrestrial planet in the habitable zone of its star, of which we could study the atmosphere."