A new, first-of-its-kind glimpse at the nanostructure of tooth enamel helps to explain why the hardest substance in the human body is so incredibly resilient.

Tooth enamel looks like bone, but it's not actually living tissue. This outer layer of the tooth – which encases and protects other tissue inside the tooth – forms when we are young, and once teeth are developed, it has no natural ability to self-repair or regrow.

Luckily, the mineralisation process that produces tooth enamel creates an incredibly tough substance that is harder than steel, and new research reveals a never-before-seen mechanism that helps make its exceptional resilience possible.

"We apply huge pressure on tooth enamel every time we chew, hundreds of times a day," says biophysicist Pupa Gilbert from the University of Wisconsin-Madison.

"Tooth enamel is unique in that it has to last our entire lifetime. How does it prevent catastrophic failure?"

The answer lies in what the researchers call the "hidden structure" of tooth enamel: an infinitesimal structural arrangement of the nanocrystals that make up our outer layer of teeth. 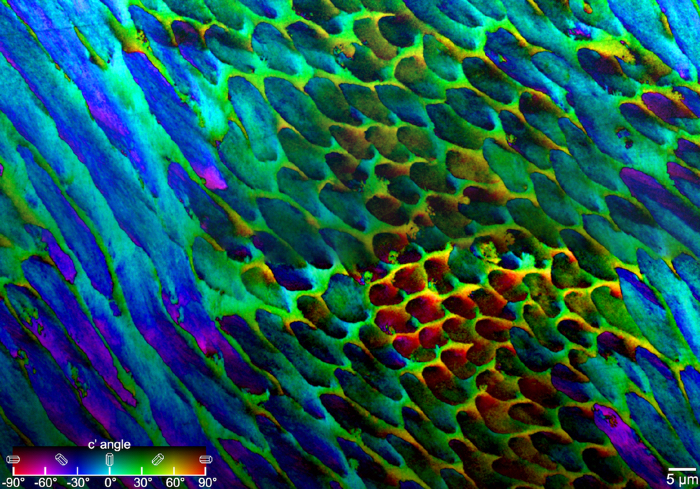 These extremely tiny crystals are made of a kind of calcium apatite called hydroxyapatite. The same mineral substance is found in the teeth of other creatures too, and the crystals really are small, measuring less than one thousandth the thickness of a human hair.

They're so small in fact, it's been difficult to get a good look at them before now.

"Prior to this study, we just didn't have the methods to look at the structure of enamel," Gilbert says.

"But with a technique that I previously invented, called polarisation-dependent imaging contrast (PIC) mapping, you can measure and visualise in colour the orientation of individual nanocrystals and see many millions of them at once."

This electron microscopy method, Gilbert says, makes the architecture of complex biominerals "immediately visible to the naked eye", and in doing so, revealed something scientists had never seen before.

When using the PIC mapping technique on human teeth, the researchers observed that the hydroxyapatite nanocrystals were not oriented in the way that researchers had previously assumed.

In enamel, the crystals are bundled into formations called rods and interrods, but the team detected a gradual change in the crystal orientations between adjacent nanocrystals that wasn't expected, with mis-orientations ranging between 1 and 30 degrees in adjacent crystals.

As for why such non-alignment exists, Gilbert and colleagues think they have an answer.

"We propose that mis-orientation of adjacent enamel nanocrystals provides a toughening mechanism," the authors write in their paper.

Of course, it would be difficult or impossible to test this hypothesis in human teeth in real life, but molecular dynamics simulations performed by the team support the idea.

In a computer model (see video above) designed to simulate how cracking could spread through enamel's crystal structure through pressure, the cracking propagated more quickly through crystal networks that didn't resemble human teeth mis-orientations (of 1 to 30 degrees).

The researchers therefore suggest that this range of nanocrystal mis-orientation may represent a sweet spot in crack deflection, and one which "enamel's long evolutionary history" may have selected for, the team says.

"This may therefore be the sweet spot  crystals 1–30° apart may maximise energy release and toughening," the paper explains.

"Crack deflection is a well-established toughening [mechanism], we therefore conclude that in enamel the observed mis-orientations play a key mechanical role: they increase the toughness of enamel at the nanoscale, which is fundamentally important to withstand the powerful masticatory forces, approaching 1,000 newtons, repeated thousands of times per day."