More than 450 huge earthworks have been discovered in western Brazil, revealing the last vestiges of land use by ancient societies, before the dense foliage of the Amazon rainforest concealed them centuries ago.

While nobody knows exactly what these mysterious sites were used for, the landmarks are evidence that indigenous societies habitually cleared and altered the Amazon landscape for hundreds of years before the arrival of Europeans in the Americas.

"The fact that these sites lay hidden for centuries beneath mature rainforest really challenges the idea that Amazonian forests are 'pristine ecosystems'," says archaeologist Jennifer Watling from the University of São Paulo in Brazil.

The landmarks – called geoglyphs – cover approximately 13,000 square kilometres, and began to show up in the 1980s in the Brazilian state of Acre, as rainforest areas were cleared for agricultural purposes.

Now Watling and her team have analysed soil samples taken from two of the sites, to reconstruct some 6,000 years of rainforest history around the ancient landmarks. 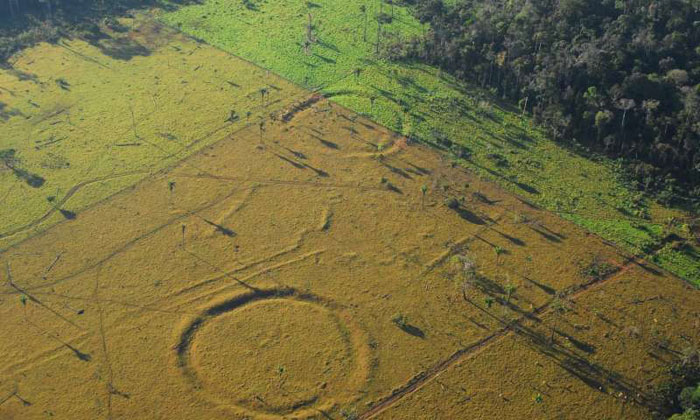 By analysing microscopic plant fossils called phytoliths in soil, scientists can estimate the historical extent of ancient vegetation, and charcoal levels can indicate past land clearing by way of forest burning.

In this case, the samples showed that the rainforest was dominated by bamboo for at least 6,000 years, but charcoal readings reveal that humans moved into the area around 4,000 years ago – at which point, palm trees began to appear in greater numbers.

The peak of burning forests to clear land occurred between about 2,300 and 1,400 years ago – during which the first earthworks are thought to have been constructed.

The trenches that remain now appear to have been dug at various times between the 1st and 15th centuries, with ditches measuring as large as 11 metres (36 feet) wide and 4 metres (13 feet deep).

While the shape and extent of these sites can be determined via aerial observations, researchers have never understood the original purpose of the sites that once lay here.

The landmarks are unlikely to have been villages, since excavation at the sites doesn't turn up significant amounts of cultural artefacts – and the layout of the indentations also suggests that the sites weren't built for defensive reasons.

Instead, the soil analysis suggests the areas were used for ritual gatherings of some kind, and may only have been visited sporadically by those who once lived here.

"It is interesting to note that the format of the geoglyphs, with an outer ditch and inner wall enclosure, are what classically describe henge sites," Watling told Sarah Knapton at The Telegraph.

"The earliest phases at Stonehenge consisted of a similarly laid-out enclosure."

While the ancient forest-dwellers that dug the ditches may have used fire to clear the forests, the researchers suggest they didn't heedlessly burn large tracts of greenery – but selectively cleared small parcels of land.

The likely purpose was to create communal spaces and markets where valuable crops like palms were traded, in addition to other products yielded by the forest.

"Despite the huge number and density of geoglyph sites in the region, we can be certain that Acre's forests were never cleared as extensively, or for as long, as they have been in recent years," Watling explains in a press release.

The researchers think these pop-up markets were also only temporary in nature, with grass and trees quickly reclaiming burnt sections of rainforest once people had moved on.

If their hypothesis is correct, it's another stark contrast to the rampant and harmful deforestation that's taken place in the Amazon in more recent times – which has seen almost 20 percent of the Brazilian Amazon lost in just over four decades.

So while the findings suggest that land-clearing in the Amazon is something that humans have done for millennia, they also show that altering green spaces for human gain doesn't have to be a harmful or permanent process if it's done carefully.

In that vein, the researchers hope their paper will serve as an example to the rainforest's custodians today.

"Our evidence that Amazonian forests have been managed by indigenous peoples long before European contact should not be cited as justification for the destructive, unsustainable land-use practised today," Watling says.

"It should instead serve to highlight the ingenuity of past subsistence regimes that did not lead to forest degradation, and the importance of indigenous knowledge for finding more sustainable land-use alternatives."

Trending News
Procrastinating Could Be a Sign of Serious Health Problems, Study Finds Health3 days ago
Fluke Discovery of Ancient Farming Technique Could Stabilize Crop Yields Environment3 days ago
These Massive Neutron Stars Existed For Less Than The Blink of an Eye Space3 days ago