Everybody knows the world's got a serious carbon dioxide problem, but an ingenious and potentially cost-effective way of dealing with our surplus CO2 could provide the means of tomorrow's battery technology.

For years scientists have looked at ways of capturing carbon and storing it underground or even potentially in the ocean. But a new system might offer a powerful advantage over these efforts.

The problem with conventional carbon capture and sequestration (CCS) systems, according to researchers at MIT, is that while they're good at preventing CO2 emissions from entering the atmosphere and trapping heat, they require a lot of energy to do so.

A study in 2014 estimated CCS uses up to 30 percent of a power plant's generating capacity, and in the end, many such systems only then store the capture CO2 in solid form, but don't actually repurpose it.

A separate branch of CO2 science looks at ways of converting the chemical into other kinds of materials that we could potentially use as a viable fuel source, which many researchers think is a preferable strategy, since it gives back something at the same time.

In that vein, a team at MIT has come up with a lithium-based battery system that soaks up carbon dioxide directly from inside power plants, converting the waste steam into a (CO2-loaded) electrolyte – one of the three main parts of a battery.

Lithium-carbon-dioxide batteries typically require metal catalysts to function, because carbon dioxide is not very reactive. The problem is, the catalysts can be expensive to source, and the chemical reactions involved can be difficult to control.

To get around this, a team led by mechanical engineer Betar Gallant achieved electrochemical carbon dioxide conversion without the metallic catalyst, using only a carbon electrode.

The answer was to use CO2 in a liquid state, incorporating it into an amine solution. 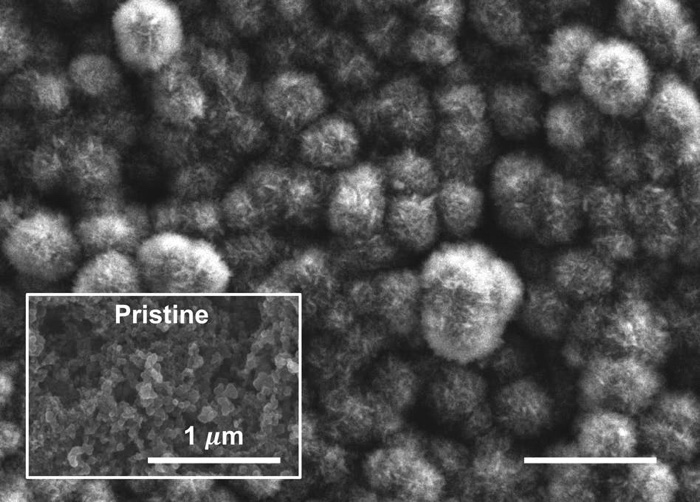 The cathode after discharge, showing carbonate material derived from emissions, and the pristine, pre-discharge surface. (MIT)

"What we've shown for the first time is that this technique activates the carbon dioxide for more facile electrochemistry," Gallant says.

"These two chemistries — aqueous amines and nonaqueous battery electrolytes — are not normally used together, but we found that their combination imparts new and interesting behaviours that can increase the discharge voltage and allow for sustained conversion of carbon dioxide."

The research so far is not ready for commercial use just yet, but the experiments show that the amine technique is competitive with other methods for lithium-gas batteries, although there are definite areas for improvement.

Chiefly, the battery system is currently limited to 10 charge-discharge cycles – a severe restriction that will need to be dramatically boosted if we are to use these lithum-carbon batteries for any serious purpose.

"Future challenges will include developing systems with higher amine turnover to approach near-continuous operation or long cycle life, and to increase the capacity attainable at higher powers," the authors write in their paper.

Ultimately, they acknowledge, it will be years before this kind of battery technology can be used to power things people actually need.

But with every minor hurdle we pass we're getting closer to that end goal – while helping to solve one of today's key environmental dilemmas (and in a way that's more useful than just transplanting it underground and out of sight).

"Lithium-carbon dioxide batteries are years away," Gallant explains, but at least if we can turn CO2 into something like a battery component, it's "one way to sequester it as a useful product."