When it comes to dealing with human-caused carbon dioxide (CO2) emissions, one of the more ambitious but still largely unproven fixes could be carbon capture, which sucks CO2 out of the atmosphere or from industrial plants.

Two of the biggest problems with carbon capture have been its cost, and finding ways to efficiently store or repurpose the CO2 once it's been extracted. But now a new technique could drastically overhaul this method of mitigating climate change: turning carbon emissions into solid rock.

An international team of scientists working in Iceland has successfully demonstrated that CO2 emissions can be pumped underground and altered chemically to form solid stone. While storing carbon in the earth is not a new thing, nobody ever expected the process to work this quickly or efficiently.

In a new study published in Science, the researchers explain that their technique for turning atmospheric carbon into solid rock only takes a few months – a timeframe that could finally help make carbon capture and storage a practical, workable solution.

"This means that we can pump down large amounts of CO2 and store it in a very safe way over a very short period of time," said hydrologist Martin Stute from Columbia University. 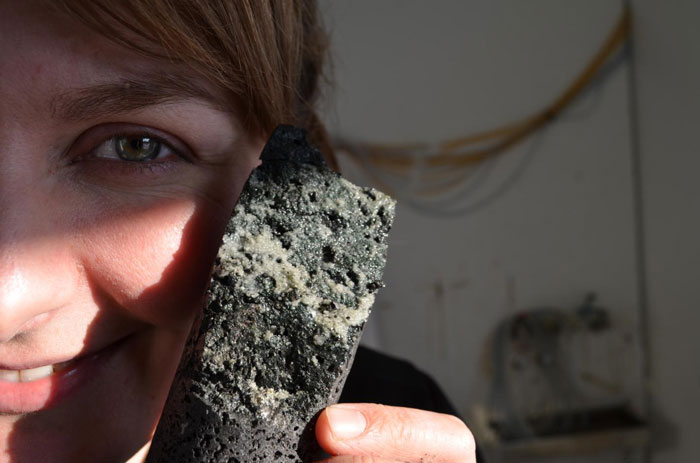 The researchers began their CarbFix project at the Hellisheidi power plant – the world's largest geothermal facility. They mixed carbon dioxide and hydrogen sulphide produced by the plant with water, and injected it into the volcanic basalt underneath the plant.

When basalt is exposed to CO2 and water, the carbon precipitates into a white, chalky solid, but in these kinds of conditions, nobody knew how long the process might take.

Initial estimates suggested that the process could take between eight to 12 years, but in this case, the conversion began to take place in a matter of months.

"Our results show that between 95 and 98 percent of the injected CO2 was mineralised over the period of less than two years, which is amazingly fast," said geoengineer and lead researcher Juerg Matter from the University of Southampton in the UK.

After a successful pilot in 2012, the plant has continued injecting carbon dioxide underground, and ongoing monitoring suggests the mineralisation process is keeping on consistently and safely – which could calm fears that storing CO2 underground might be dangerous.

"Carbonate minerals do not leak out of the ground, thus our newly developed method results in permanent and environmentally friendly storage of CO2 emissions," said Matter. "On the other hand, basalt is one of the most common rock types on Earth, potentially providing one of the largest [means of] CO2 storage capacity."

The researchers haven't yet indicated whether there could be any potential use for the carbon rocks once they've been made, which is something other carbon capture techniques have looked into.

One Canadian startup is turning carbon emissions into pellets that could be used as a synthetic fuel source, while a Swiss company called Climeworks is pumping extracted carbon to farms for agricultural use.

So there are plenty of alternatives if long-term storage in rock underground doesn't work out, but right now it sounds like this new technique could turn out to be a huge deal for carbon capture and storage – and climate change mitigation more generally.

But the team acknowledges there's still a lot more research to be done. The process also requires large amounts of water to work, but the researchers say seawater could be used.

"The overall scale of our study was relatively small. So, the obvious next step for CarbFix is to upscale CO2 storage in basalt," said Matter. "This is currently happening at Reykjavik Energy's Hellisheidi geothermal power plant, where up to 5,000 tonnes of CO2 per year are captured and stored in a basaltic reservoir."

It's early days, sure, but we can't wait to see where this research leads.