Scientists in Canada are developing an industrial carbon dioxide recycling plant that could one day suck CO2 out of the atmosphere and convert it into a zero-carbon e-diesel fuel. Developed by tech start-up Carbon Engineering and partly funded by Bill Gates, the system will essentially do the job of trees, but in places unable to host them, such as icy plains and deserts.

Just like these new solar cells that are designed to split water into a hydrogen fuel, the CO2 recycling plant will combine carbon dioxide with hydrogen split from water to form hydrocarbon fuel. The plan is to provide the technology that could one day produce environmentally friendly fuel to complement the renewable energy systems we have now. "How do you power global transportation in 20 years in a way that is carbon neutral?" Geoff Holmes, business development manager at Carbon Engineering, told Marc Gunther at The Guardian. "Cheap solar and wind are great at reducing emissions from the electricity. Then you are left with the transport sector."

Carbon Engineering is one of a handful of companies around the world that are now set on coming up with ways to suck enough carbon dioxide out of the atmosphere to actually put a dent in the effects of climate change. There's also the New York City-based start-up Global Thermostat, and Swiss-based Climeworks, which demonstrated earlier this year with Audi how its technology can capture carbon dioxide, and deliver it to German company Sunfire, where it was recycled into a zero-carbon diesel fuel.

While Climeworks' demonstration was impressive, what all three companies now need to do is figure out how to make their atmospheric carbon dioxide to fuel systems economically viable. And this won't be easy. One problem they're going to have to overcome is the high cost of heating their carbon dioxide to around 400 degrees Celsius so they can process it properly. Another problem is that few investors are interested in giving them money until they can prove that this is actually feasible.

As Gunther reports for The Guardian, governments and private investors aren't interested in paying anyone to come up with ways to simply suck carbon dioxide out of the environment, no matter how beneficial to the environment it might be. Plus even if someone was interested, they'd better be willing to fork out the billions of dollars it's going to take to build a system that could actually make a discernible difference to the world's climate. These developers need to offer their investors something valuable in return, and the obvious answer is fuel. 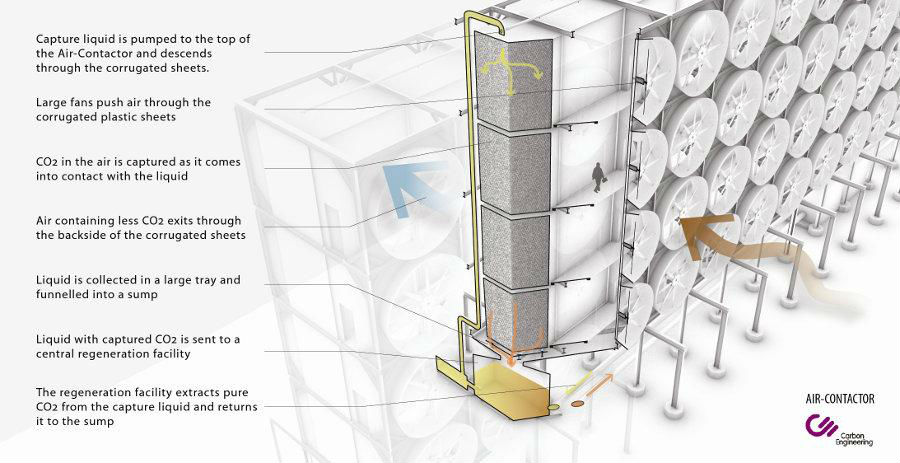 Right now, Carbon Engineering's planned system could only capture only about 450 tonnes of CO2 each year, which would barely cover the carbon emissions of 33 average Canadians, but they say this system could be scaled up to 20,000 times to make it more practical.

As the video explains below, direct air capture seems to be the only potentially feasible way to absorb carbon dioxide that's already been emitted from small mobile sources such as cars, trucks, and planes, which make up 60 percent of carbon dioxide emissions today. The systems require 1,000 times less land than carbon-sucking trees, and can be installed on land, like desert plains, that isn't worth cultivating or inhabiting.

"I believe we have reached a point where it is really paramount for substantive public research and development of direct air capture," Klaus Lackner of Arizona State University's Centre for Negative Carbon Emissions said at the American Physical Society meeting in the US earlier this year.

"Scientists are increasingly convinced that we are going to need large scale removal systems to fight climate change," Noah Deich from the California-based Centre for Carbon Removal told The Guardian. "I'm excited about direct air capture. It could be a really important technology to add to the portfolio."

Watch the video below to see how Carbon Engineering plans on doing it. It's going to take a while before we see the captured carbon to fuel model become a viable solution, but that's not stopping the likes of Carbon Engineering, Climeworks, and Global Thermostat. We're excited to see what they come up with.