The Oldest Hominins Could Have Lived in Europe, Not Africa, Claims New Study

Fragment of a painting of Graecopithecus freybergi by Velizar Simeonovski

A new examination of two 7.2 million-year-old fossils from southern Europe suggests that humans split off from the great apes several hundred thousand years earlier than we thought.

Thanks to DNA sequencing, we know that humans and chimpanzees (Pan troglodytes) once split from a common ancestor, but there's hot debate over the timing and location of this evolutionary parting. Now, an international team says they might have found a surprising new pre-human candidate, challenging what we think we know about early human evolution.

In a new study, researchers re-analysed Graecopithecus freybergi - a little-known species of dubious taxonomy originally described from a lower jaw bone fossil found in 1944 in Greece. In 2012, the Graecopithecus jaw bone was joined by a fossilised premolar found in Bulgaria.

Using micro-computed tomography and 3D reconstructions of the roots and internal structure of the fossilised teeth, the scientists found features characteristic of modern humans and their early ancestors. 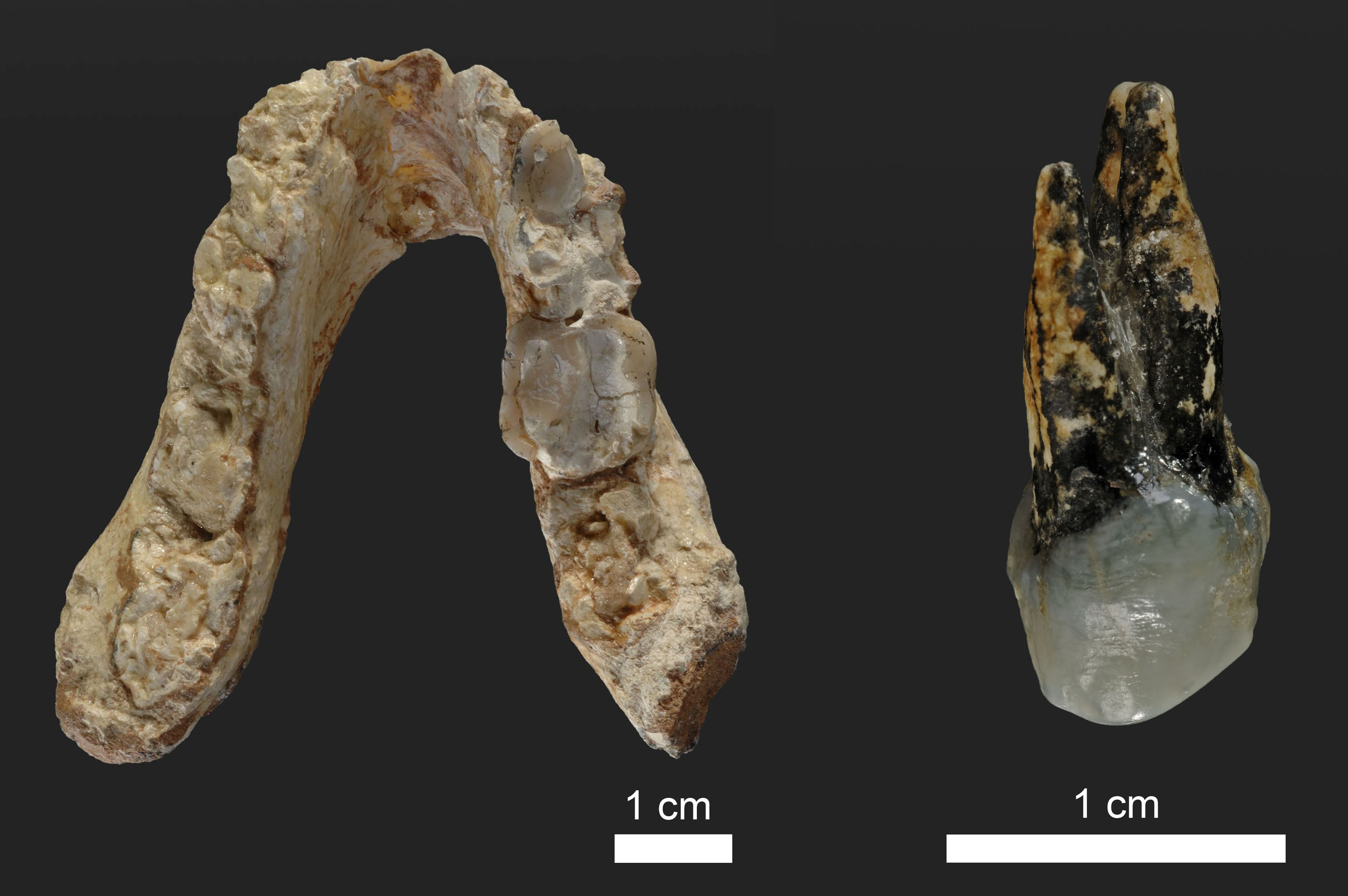 They suggest this find places Graecopithecus in the hominin basket - the evolutionary branch reserved strictly for modern humans, extinct humans, and all our non-ape ancestors.

The fossil was previously thought to be a hominid, which is a wider group including not just humans, but also chimps, gorillas, and all other modern and extinct Great Apes.

If we move Graecopithecus to our own line, that could shake up the whole story.

"If this is indeed a human, it would be the oldest human ancestor known and the first to be identified outside of Africa," one of the researchers, David Begun from the University of Toronto, Canada, told ScienceAlert.

"Ever since Darwin conventional wisdom is that the last common ancestor of chimpanzees and humans lived in Africa. Our research shows that the earliest humans may have evolved in Europe."

Given how hazy our fossil record is of those earliest days of human evolution, this would be a pretty huge deal.

"It's actually a pretty controversial thing to say and I expect there will be a major reaction to it," palaeoanthropologist Darren Curnoe from the University of New South Wales, who wasn't involved in the research, told ScienceAlert.

Curnoe is "convinced that they're onto something", but emphasises that there's very little fossil evidence to go by here. We only have a jaw bone and a tooth, and the researchers were only able to identify one physical feature, focussing on the roots of the teeth.

If we're going to accept the Eastern Mediterranean as the place where human lineage split from chimpanzees some 7 million years ago, we could do with finding more fossil samples.

On top of that, to confirm that Graecopithecus was a hominin, we'd need to examine additional features, not just teeth.

"As always, we prefer to have more fossils, in particular, fossils that would tell us something about how Graecopithecus moved about," Begun told ScienceAlert.

"If it was a biped, that would seal the deal."

Even though fossil evidence is scant so far, there's always potential to find more, although it's "a bit of a lottery" to know what nature has preserved for us in the geological record, as Curnoe puts it.

The team also did additional work to date the two Graecopithecus fossils by analysing sediments from the two sites in Greece and Bulgaria.

They found that the jaw bone was 7.175 million years old, and the single tooth dated back to 7.24 million years, situating the potential hominin at a time when the Mediterranean looked very much like an African savannah.

In the painting below, artist Velizar Simeonovski portrays Graecopithecus in its place of discovery, Pyrgos Vassilissis, as it would have looked 7.2 million years ago, under a reddish cloud of Sahara dust: 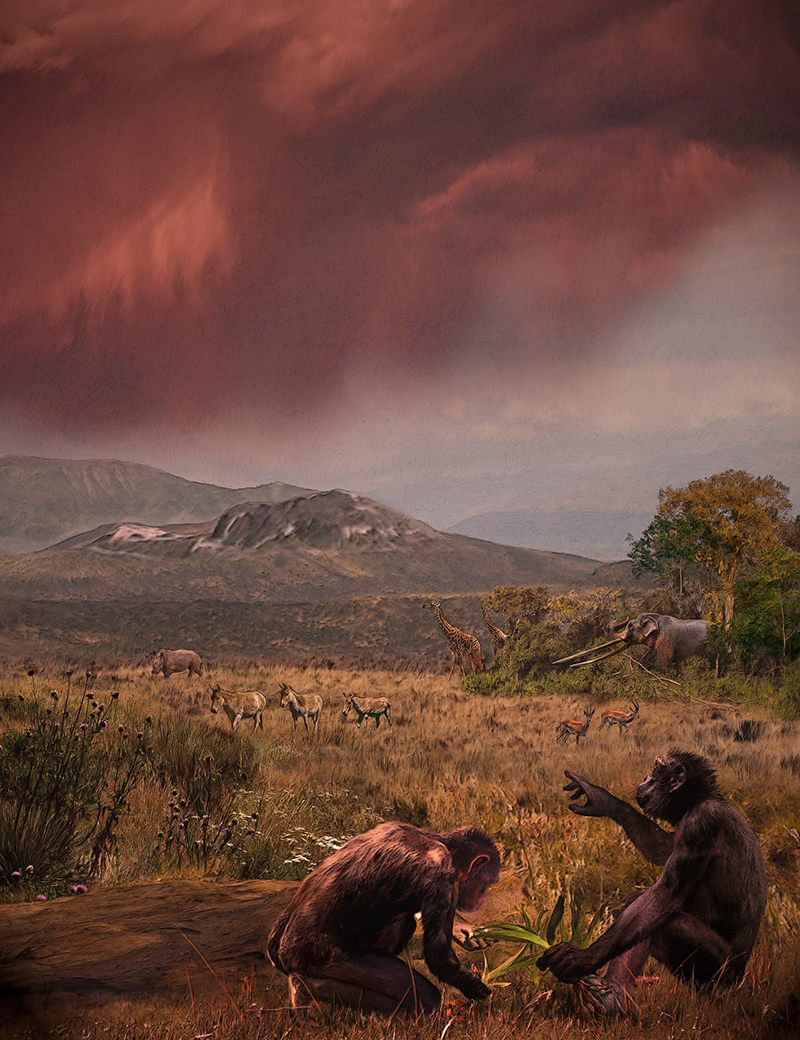 "It is at the beginning of the Messinian, an age that ends with the complete desiccation of the Mediterranean Sea," lead researcher Madeleine Böhme from the University of Tübingen, Germany, said in a press statement.

"The incipient formation of a desert in North Africa more than seven million years ago and the spread of savannahs in Southern Europe may have played a central role in the splitting of the human and chimpanzee lineages."

Looking back in time to glean our origins millions of years ago was never going to be an easy task.

And as these new results show, things are often much more complex than we can imagine, although for now it's too soon to talk about rewriting any textbooks.

The studies are published across two papers in PLOS ONE here and here.