Environment16 May 2017
By Peter Dockrill

In the middle of the South Pacific, there's a remote, uninhabited island, virtually hidden more than 5,000 kilometres (3,100 miles) from the closest major population centre.

You'd think that this isolated sanctuary would be pretty unspoilt, but Henderson Island, which is so remote it's only ever visited by scientists every five to 10 years, is in a world of trouble. Millions of pieces of floating plastic debris have washed up on its shoreline in greater volume than scientists have ever witnessed.

According to new research led by marine eco-toxicologist Jennifer Lavers from the University of Tasmania in Australia, the beaches of Henderson Island are littered by up to 671 items of plastic debris per square metre – the highest density ever recorded.

If you extrapolate that statistic, it means the island is home to some 37.7 million pieces of plastic garbage – a far cry from the idyllic, untouched getaway we might imagine Henderson Island to be, given the atoll is completely unpopulated by humans. 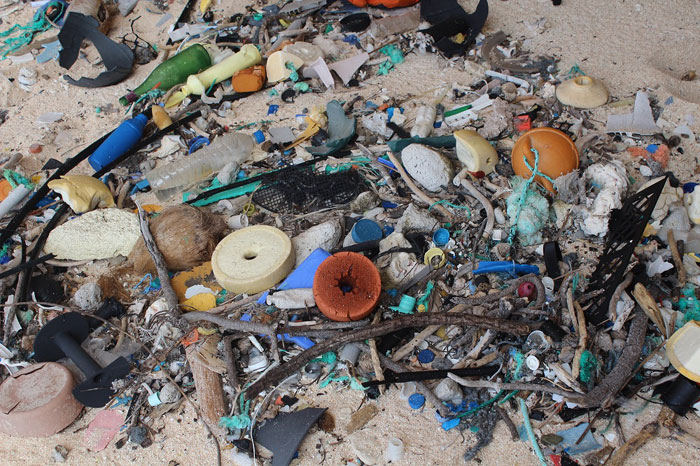 "What's happened on Henderson Island shows there's no escaping plastic pollution even in the most distant parts of our oceans," says Lavers.

"Based on our sampling at five sites we estimated that more than 17 tonnes of plastic debris has been deposited on the island, with more than 3,570 new pieces of litter washing up each day on one beach alone."

Henderson is the largest of the four Pitcairn Islands – territory that's under the jurisdiction of the UK.

Despite its remote location, the island's position actually makes it something of a magnet for floating debris. It lies within the South Pacific Gyre, meaning swirling ocean currents collect debris from elsewhere and carry it inwards to Henderson Island's doorstep.

The researchers say their estimates of Henderson's debris may actually understate the problem, as they weren't able to sample along cliffs and rocky coastline areas, and were limited to counting trash pieces bigger than 2 millimetres down to a depth of 10 centimetres (3.9 inches).

That said, the sheer amount of garbage the team could count in three months of research on the island was enough to take a toll on the scientists – especially after they witnessed the impact the debris was having on marine animals, including a sea turtle fatally entangled in fishing line.

"I don't think I've stood somewhere and been so utterly and completely surrounded by plastic," Lavers told Ed Yong at The Atlantic.

"After a while, your brain has to shut off. You focus on things like a toy soldier or some dice – something that reminds you of something fun from your childhood. That's the coping mechanism."

In the course of their study, the researchers counted more than 53,000 pieces of human-made trash, traced to 24 different countries of manufacture.

The problem is compounded as weathered plastic begins to break down, meaning one piece of litter can multiply into many more.

"If a milk jug or water bottle washes ashore on a remote island, it's brittle from UV radiation," marine debris researcher Denise Hardesty from Australia's CSIRO, who wasn't involved with the study, told The Atlantic.

"It's in a location where wave and wind, acting against hard physical objects like sand and stones, can break it into smaller pieces. Now that single item has now become hundreds or thousands of very small fragments."

According to Lavers, the only way to address the issue – and to protect shorelines and their animal inhabitants from further pollution – is to reduce plastic production.

Unfortunately, with global plastic production now standing at more than 300 million tonnes – a six-fold increase since the 1970s – that doesn't look like it will occur any time soon.

But unless we want more beachfronts to become buried in the shadow of yesterday's food packets and toy trinkets, it's something we really need to look at in our home countries – which is where Henderson Island's pollution originates.

"It's not just commercial fisheries or cruise ships," Lavers says.

"A lot of this came from storm drains, and probably litter on beaches in… goodness knows, pick a city anywhere in the world."