No, One-Third of Millennials Don't Actually Think Earth Is Flat

Give the internet some weird statistic on millennials and it's gonna have a field day with it. Like this latest one: "a third of millennials believe the Earth is flat".

Except it's not, and they don't.

Here's what happened: in February, the online polling company YouGov conducted a survey on American beliefs about our planet's shape.

"Do you believe that the world is round or flat," the 8,215 participants were asked, and given a small range of answers to choose from:

The results, weighted to be representative of the US population, revealed that 2 percent of adult Americans are firmly convinced Earth is as flat as a pancake.

Meanwhile, 84 percent "have always believed the world is round."

So far, so good. For further insight, the results were also broken up by age group, and this is where young millennials got an unexpected bashing.

As per the results, only 66 percent of 18-24 year-olds are firmly convinced of our planet's spherical shape.

But that doesn't automatically mean the other third thinks it's flat. Here's the actual breakdown of the data by age group: 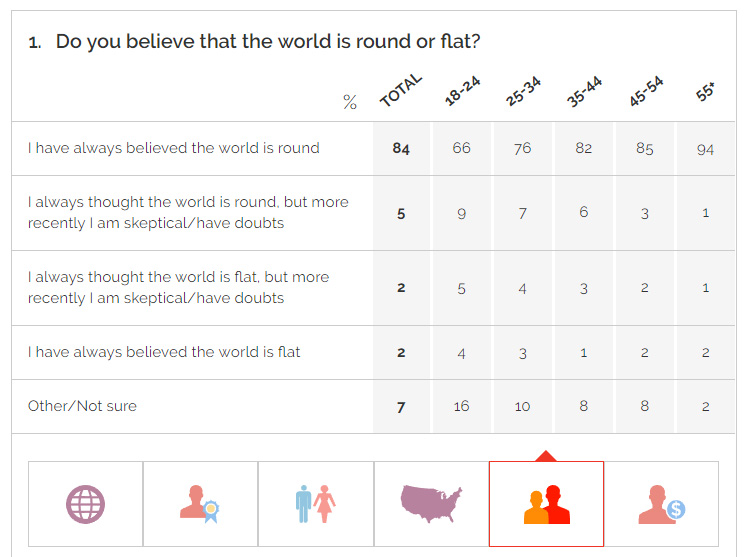 As you can see, only 4 percent in the youngest age group expressed flat-Earther convictions, and a further 14 percent showed skepticism in either direction.

Not to mention a whole 16 percent who simply ticked the "other/not sure" box.

Before you decry that last stat as the state of young people's education (how can they not know!?), keep in mind - other YouGov polls of Americans have found that 13 percent of those young folks don't even know what feelings they have about salad, and 20 percent don't know what they think of romantic breakups.

There could be so many reasons for choosing the "other" box, including not really caring or not thinking about Earth's shape, and simply wanting to get through the survey to cash in those reward points.

As for the 4 percent of young flat-Earthers unearthed in the data - there's no way of telling how truthful they were being, and whether they just wanted to mess with the researchers when they saw the amusing study question.

Besides, the 18 to 24 group isn't even the only millennial set in this poll.

According to the latest generational cutoff point designated by Pew Research, the oldest millennials right now are actually 37 years old.

All this is not to say that pancake Eartherism is not enjoying a bit of a heyday right now.

There are indications that American interest in the flat-Earth movement is on the rise, but it's tricky to say how much of that is because they're laughing at it, not with it.

Californian Mike Hughes with his amateur rocket stunts and rapper B.o.B. with a wacky crowdfunding campaign have certainly garnered a lot of attention online, but the vast majority of humans don't take them seriously.

But if you still want to be upset about something, consider this: a 'round Earth' can still be flat, like a disk. Maybe YouGov should have asked whether Earth is spherical?

You can read more about the poll results here.