With a mass close to zero and no electric charge, the sub-atomic particle called a neutrino is so hard to detect, physicists refer to it as a ghost particle.

But its elusiveness is nothing compared to an even stranger type of ghost particle that's hypothesised to exist - the sterile neutrino. So far, all efforts to find sterile neutrinos have come up empty-handed, and researchers have just announced that the most recent attempt is no different.

It's tempting to give up hope, but proving that the sterile neutrino actually exists could fundamentally change physics and how we see the Universe, so it's worth at least another shot.

Physicists from the Institute for Basic Science in South Korea set up the Neutrino Experiment for Oscillation at Short Baseline (NEOS) to see if they could pick out sterile neutrinos from the storm of particles being emitted from the core of the Hanbit Nuclear Reactor Power Plant in the city of Yeonggwang.

Neutrinos aren't nicknamed ghosts for nothing – even though they belong to the same family of particles as electrons, they don't carry an electric charge.

That means the only way neutrinos can interact with other particles is by way of gravity and the weak nuclear force.

Since their mass is so tiny, it was once thought to be zero, the only practical way to detect them is to wait until one slams into a proton or a neutron in an atom's nucleus and causes a reaction.

While there are countless numbers of neutrinos expelled from nuclear reactions inside our Sun and distant stars, with quite literally billions of these things passing through you every second, virtually none of them even pause on the way through.

To spot a neutrino out in space, physicists go big, using giant underground tanks of water surrounded by photodetectors that can detect the rare flash of radiation emitted as the neutrino collides with one of the sub-atomic particles in the water and causes it to release an electron.

Back in the 1960s, physicists figured out that neutrinos come in three forms, or 'flavours' – electron neutrinos, tau neutrinos, and muon neutrinos.

Experiments on neutrinos pouring out of the Sun quickly followed their discovery, but the numbers didn't quite match up with models – half to two-thirds of the electron flavour neutrinos appeared to be missing.

As if neutrinos weren't sneaky enough, it was later found that neutrinos switch flavours mid-flight, which explains where those missing electron neutrinos went.

Research at Los Alamos in the 1990s also detected something a little unusual in the neutrino's oscillations,  which hinted at the possibility of a neutrino we were missing altogether.

Another experiment in 2011 also detected a possible gap in their results, with about 7 percent fewer neutrinos measured than predicted, hinting at a fourth flavour.

Technically, for neutrinos to have no charge, physicists calculate there should be no more room for any other flavour of neutrino ... unless they behaved a little differently.

Electron, muon, and tau neutrinos are what's described as left handed, which is a feature of their angular momentum. Other particles of this nature have a right-handed form, so it's natural to assume neutrinos would too.

Another feature of this mysterious hypothetical neutrino is its complete lack of interaction with the weak nuclear force, making it effectively 'sterile'.

So if 'active' neutrinos are ghosts, the sterile neutrino is what ghosts become after they die.

Encouraged by these results, the NEOS researchers set up a small electron neutrino detector behind a thick wall of lead shielding just 24 metres (8 feet) from the radioactive core, hoping to detect a pattern among the 5 x 10^20 neutrinos that poured out of the reactor every second. 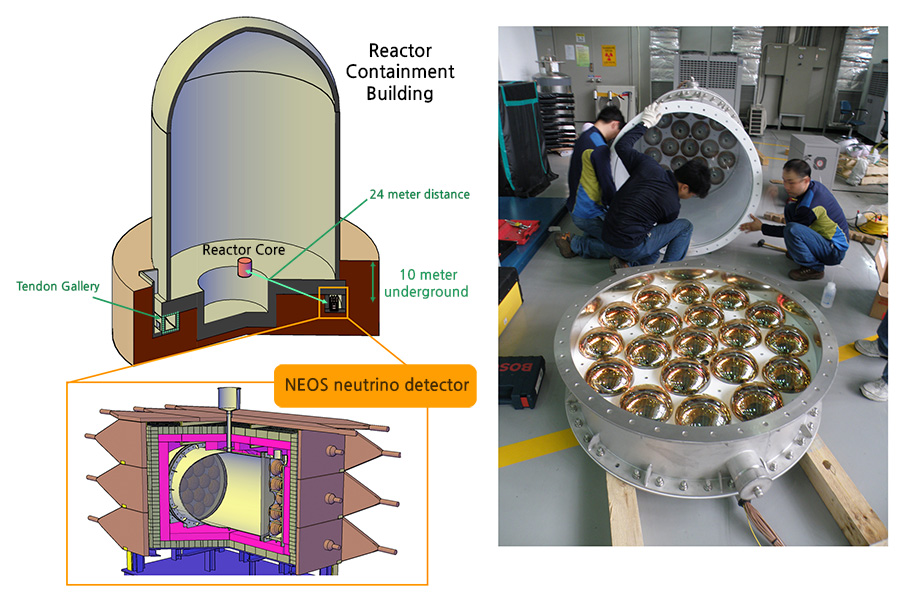 After comparing their results with theoretical calculations and figures from other experiments, NEOS failed to provide concrete proof of the sterile neutrino's existence.

Not that the experiment itself was a waste of time – for one thing, they did find a strange 'bump' in their data, marking what could be an unexpected abundance of neutrinos at an energy of 5 MeV, although the meaning of this surge is yet to be confirmed.

The results also set up new boundaries for the search of the particle, limiting the oscillations that turn electron neutrinos into a sterile flavour.

Sterile neutrinos have been predicted to be as massive as a whopping 10^15 GeV, or as light as just 1 eV, with a hypothetical heavy version once even being considered a contender for dark matter, something that makes up 80 percent of the Universe and yet still eludes identification.

Other experiments in China and a project called MINOS at the Fermi National Accelerator Laboratory in the US have also failed to find anything.

Not that the team behind NEOS is giving up so easily.

"These results do not mean that sterile neutrinos do not exist, but that they are more challenging to find than what was previously thought," said researcher Oh Yoomin.

Because if it's one thing you're going to need to catch the ghost of a ghost, it's patience and a healthy dose of optimism.

This research was published in Physical Review Letters.