Physicists have come up with what they claim is a mathematical model of a theoretical "time machine" - a box that can move backwards and forwards through time and space.

The trick, they say, is to use the curvature of space-time in the Universe to bend time into a circle for hypothetical passengers sitting in the box, and that circle allows them to skip into the future and the past.

"People think of time travel as something as fiction. And we tend to think it's not possible because we don't actually do it," said theoretical physicist and mathematician, Ben Tippett, from the University of British Columbia in Canada.

"But, mathematically, it is possible."

Together with David Tsang, an astrophysicist at the University of Maryland, Tippett used Einstein's theory of general relativity to come up with a mathematical model of what they're calling a Traversable Acausal Retrograde Domain in Space-time (yep, the acronym is literally TARDIS).

But before we get into the madness of legit time travel, let's put this into perspective real quick - the researchers aren't claiming to have a blueprint for a Doctor Who-style time machine that can be built tomorrow.

They say the materials we'd need to build this thing are so exotic, we haven't even discovered them yet… but we'll get to that in a minute.

Firstly, let's talk about what Tippett and Tsang are actually proposing.

The model is based on the idea that instead of looking at the Universe in three spatial dimensions, with the fourth dimension (time) separated, we should be imagining those four dimensions simultaneously.

That allows us to consider the possibility of a space-time continuum, where different directions in space and time are all connected within the curved fabric of the Universe.

Einstein's theory of relativity links gravitational effects in the Universe to a curvature of space-time - the phenomenon thought to be behind the elliptical orbits of planets and stars.

If space-time were 'flat' or uncurved, planets would move in straight lines. But according to relativity, the geometry of space-time becomes curved in the vicinity of high-mass objects, which causes planets to bend their paths and rotate around their star instead.

What Tippett and Tsang argue is that it's not just physical space that can be bent and twisted in the Universe - time itself can also be curved in the vicinity of high-mass objects.

"The time direction of the space-time surface also shows curvature. There is evidence showing the closer to a black hole we get, time moves slower," said Tippett.

"My model of a time machine uses the curved space-time to bend time into a circle for the passengers, not in a straight line. That circle takes us back in time."

In order to harness this theoretical property, the physicists propose creating a kind of 'bubble' of space-time geometry, which carries whatever's inside it through space and time along a large circular path.

If this bubble can hit speeds greater than the speed of light - something the pair say is mathematically possible - this would allow it to move backwards in time.

"It is a box which travels 'forwards' and then 'backwards' in time along a circular path through spacetime," the researchers explained in their 2017 paper.

"Delighted external observers would be able to watch the time travellers within the box evolving backwards in time: un-breaking eggs and separating cream from their coffee."

You can see the basic idea in the image below, with a passenger inside the bubble/time machine (person A), and an external observer standing beside it (person B).

The arrow of time - which under normal circumstances (in our Universe, at least) always points forward, making the past become the present - is represented by the black arrows: 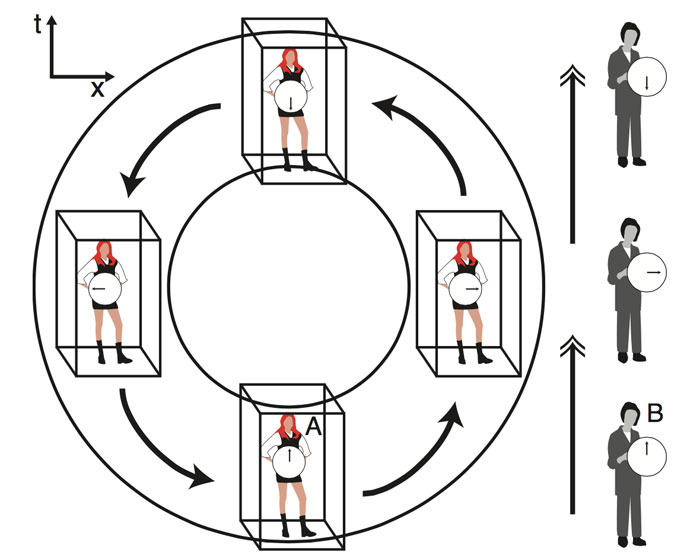 Both person A and person B will experience time in dramatically different ways, the researchers explained:

"Within the bubble, A will see the B's events periodically evolve, and then reverse. Outside the bubble, observer B will see two versions of A emerge from the same location: one's clock hands will turn clockwise, the other counterclockwise."

In other words, the external observer would see two versions of the objects inside the time machine: one version evolving forwards in time, the other backwards.

While Tippett and Tsang say the maths is sound, the problem now is we don't actually have the right materials to build what they're proposing.

"While is it mathematically feasible, it is not yet possible to build a space-time machine because we need materials - which we call exotic matter - to bend space-time in these impossible ways, but they have yet to be discovered," said Tippett.

Their idea recalls another theoretical time machine - the Alcubierre drive, which would also use a shell of exotic matter to transport passengers through time and space (hypothetically).

Both ideas can't go very far without some idea of how to actually produce these space-time-bending materials, but as Tippett points out, we're never going to stop wondering about the possibilities of time travel, and this is just one more direction we can take this mind-bending physics.

"Studying space-time is both fascinating and problematic," he said.

"Experts in my field have been exploring the possibility of mathematical time machines since 1949, and my research presents a new method for doing it."

The research was published in Classical and Quantum Gravity.

A version of this article was first published in April 2017.