Playtpuses Sweat Milk, 'See' With Electricity, And That's Not Even The Weirdest Thing

Australia is known for it's strange and adorable wildlife found nowhere else on the planet: koalas, kangaroos, and that giant bird that looks like a dinosaur.

And then there's the platypus - a bizarre and reclusive animal that looks sort of like a duck and an otter had a baby, but fluffier.

It's so strange in appearance that when British scientists first encountered the "extraordinary" animal, they famously questioned whether it was an elaborate hoax of different animal bits stuck together.

But its weird looks are just scratching the surface. Most people have no idea just how bizarre the half-aquatic species really is.

One of only two monotreme animals in the world, this mammal lays eggs instead of giving birth to live young, and then sweats milk out from pores along its stomach to feed the babies. 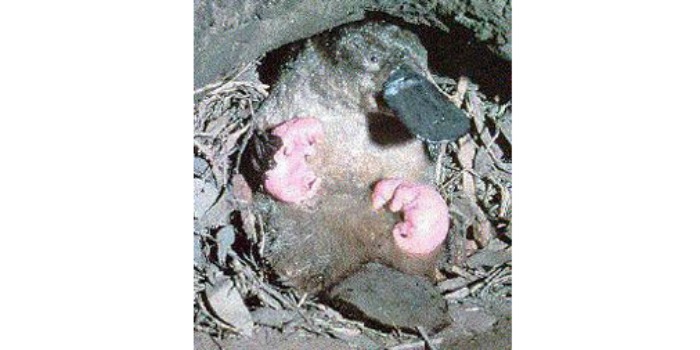 That's pretty odd, until you wrap your head around the way this nocturnal water creature hunts - via electricity.

Yes, you read that right. The timid and nocturnal creatures spend up to 10 hours in the water at any one time, coming up for air as little as possible, thanks to a higher than usual concentration of myoglobin - oxygen-binding proteins - in their lungs.

They stalk their prey of insects and freshwater crustaceans in murky water under the cover of night, closing their eyes, ears, and nose as they dive beneath the surface.

To navigate, they use electroreceptors in their duck-like bills to detect the faint electric signals that are generated by the nerves and hearts of their prey.

And when it comes to eating what they've hunted down, platypuses don't have a stomach - their gullets connect directly to their intestines.

Not to mention the extra bones in their shoulders not found in any other mammals - which means they don't swim with four limbs, they power themselves forward with their front legs and steer with their tails, letting their back legs dangle behind.

Research also suggests that platypus eyes are more similar to those of Pacific hagfish or Northern Hemisphere lampreys - so, sea creatures - than to other mammals.

You'd think that's enough weirdness for one small creature, but no. We haven't even touched on the fact that they're venomous.

The venom isn't in their bite - no, that would be too simple. Instead, it's attached to a spur on the hind foot of males.

It's pretty nasty stuff, capable of killing small animals, and causing excruciating pain in humans. But its not there to harm prey - its purpose is to assert dominance over other males during the breeding period.

And in 2016, researchers discovered a hormone contained in platypus venom could actually help us develop new kinds of diabetes treatments.

In the most recent twist, scientists discovered that the platypuses' strange milk - yep, the one it sweats out through its skin - could actually help fight drug-resistant superbugs.

The researchers showed that a protein within their milk has incredibly antimicrobial properties.

"Platypus are such weird animals that it would make sense for them to have weird biochemistry," said one of the team, molecular biologist Janet Newman from Australia's CSIRO.

"By taking a closer look at their milk, we've characterised a new protein that has unique antibacterial properties with the potential to save lives."

If that's not enough to make it your new favourite animal, well, there's this.