As historical finds go, it ranks up at the more remarkable end of the scale – archaeologists working in Egypt have uncovered the remains of a rare Greco-Roman temple, including parts of its foundation, the main entrance, and the front courtyard.

The significant discovery was made in Egypt's Western Desert at a site called Al-Salam, around 200 miles south from the shores of the Mediterranean.

And the experts working on the dig say there's likely to be much more to come as the excavation continues: pottery, coins, a sculpture of a man's head and wall pillars decorated with motifs of the time have already been revealed.

Two limestone statues of lions are also among the archaeological haul, though one is currently missing a head. 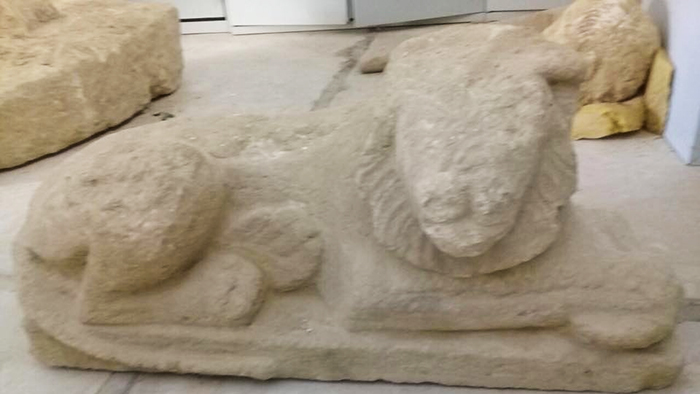 "What's amazing is you don't tend to hear every day of new temples found in Egypt," space archaeologist Sarah Parcak, who isn't involved in the dig, told Elaina Zachos at National Geographic.

"It's going to shed more light on the history of Siwa Oasis."

The Siwa Oasis is one of the most isolated Egyptian settlements. It lies between the Qattara Depression and the Egyptian Sand Sea, around 560 km (348 miles) west of Cairo.

The historical timeline of the oasis isn't all that clear, but people are thought to have lived there since at least 10,000 BCE. This newly found temple find dates from between 200 BCE and 300 CE.

While Egypt came under Hellenistic and then Roman rule during this time, the architecture and religions of ancient Egypt remained very much alive, and influences both traditional and new can be seen in the buildings of the time – including the temple at Al-Salam.

Unfortunately very few ruins of this era remain, which is what makes the discovery all the more exciting.

Further work on the site is expected to last at least for the rest of the year, so we can look forward to more historical artefacts emerging from the rubble.

The dig could tell experts more about the activities happening in Siwa Oasis during this period, as well as how the foreign rulers occupied the land, and the number of people living here at the time.

Temples were used as places of trade and and socialising as well as religious events, and were where the priests actually lived. The house of a priest could well be among the findings still to come from the dig.

Currently the Siwa Oasis region's biggest claim to fame is being the location where the Greek king Alexander the Great consulted the oracle of Ammon.

It was here he believed he was called to be the divine king of Egypt.

This find reported by the Egyptian Ministry of Antiquities is just one of many to come out of Egypt in recent years. Earlier this year a hidden network of tombs was discovered at a site to the south of Cairo, tombs more than 2,000 years old.

And last year a tomb dating back 3,500 years was uncovered, complete with mummified remains. The fantastic finds from this part of the region just keep on coming, and they're all crucial in piecing together the long history of Egypt and the surrounding nations.

"We think we know so much about ancient Egypt, but there's so much of it left to find," Parcak told National Geographic.