Tsunami Risk in The UK Is 'Far More Serious' Than We Ever Knew, Scientists Warn

It was called the Storegga Slide: a massive underwater landslide off the coast of Norway, which generated a towering 20-metre-high (66 ft) tsunami sweeping across the UK's Shetland Islands.

Luckily, that ancient wave of destruction – which also struck mainland Scotland, Norway, and Greenland – happened over 8,000 years ago, leading scientists to think such a rare, devastating surge was only a once-in-10,000 years catastrophe. Until now.

New research has uncovered evidence that tsunami activity in the UK is far more frequent than previously realised, with the discovery of two additional and completely unknown tsunamis that hit Shetland thousands of years after the Storegga Slide. "We found sands aged 5,000 and 1,500 years old at multiple locations in Shetland, up to 13 metres (43 ft) above sea level," says physical geographer Sue Dawson from the University of Dundee in Scotland.

"These deposits have a similar sediment character as the Storegga event and can therefore be linked to tsunami inundation."

While these newly found tsunamis may seem like distant, long ago occurrences – much like the Storegga Slide does – their discovery nonetheless signifies these giant freak waves aren't quite as freak in the UK as we thought.

With the new events added to the historic tally, it's tripled the number of known tsunamis recorded in the UK in the last 10,000 years – which suggests that the threat of giant waves breaking over British shores, while still historically rare, is significantly greater than anticipated.

"They're much higher frequency, and 1,500 years ago is very, very recent – it's 500 [CE] if you want to think about it like that," one of the researchers, Dave Tappin from the British Geological Survey, explained to the BBC.

"It means that the hazard – the risk – is far more serious than we thought previously."

Calculating the extent of that risk is part of what the team is now trying to ascertain.

Using a CT scanning machine, the researchers are analysing sand debris transported by these ancient tsunamis and dumped across sites at the lochs of Shetland's Basta Voe and Dury Voe. 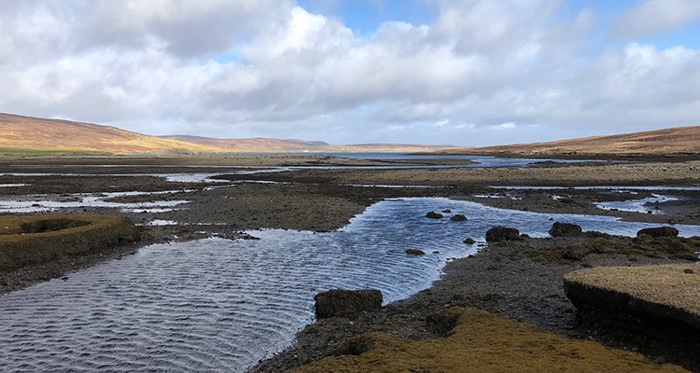 "For the first time, we'll have a complete 3D view of the cores we've extracted from the ground and from lochs and seabeds," Dawson explains.

"This detail will show us which direction the wave was travelling in, identify the elements present in the sand, and much more. This will be the first time that such a level of detail has been captured from these prehistoric tsunami events."

In addition to investigating these monumentally shifted sands, the ongoing research is part of a project dedicated to understanding how underwater landslides create tsunamis in the first place.

Using theoretical models, the aim is to reproduce the 1,500 and 5,000 year tsunamis, simulating submarine landslides – along with a digital elevation model of the Shetland Islands – and seeing how far the rogue waves travel.

"The numerical model will flood the land and we'll look at the elevation of the sediments to see if they match with what's on Shetland," Tappin says.

"That will take us much closer to finding where the actual tsunamis began."

Underwater landslides are thought to be triggered by earthquakes, but scientists are still learning how they come about.

What is clear is that these phenomena can induce massive structural changes in the submarine landscape – which is why the terrifying waves they produce are so fierce.

In terms of Storegga, the structural collapse ran some 290 kilometres (180 miles) of coastal shelf, displacing an underwater volume of seabed equivalent to the area of Iceland covered to a depth of 34 metres (112 feet).

Even scarier, they can occur anywhere in the ocean, and don't even require steeply inclined seabed for their avalanches to unleash.

"Submarine landslides can also occur on slopes of just one or two degrees, and we still don't know exactly how they are set in motion, except that earthquakes are considered to be the most common trigger," says Tappin.

"It is critical that we learn more."