Infographic: The Most Exciting Science News This Week

An awful lot can happen in any given week, and it's no easy task keeping up with all the excitement - both in the world of science and beyond.

To keep you up to date with our coverage at ScienceAlert, each week we put together this shareable image with some of the past week's highlights.

Links to all the stories are below the picture. 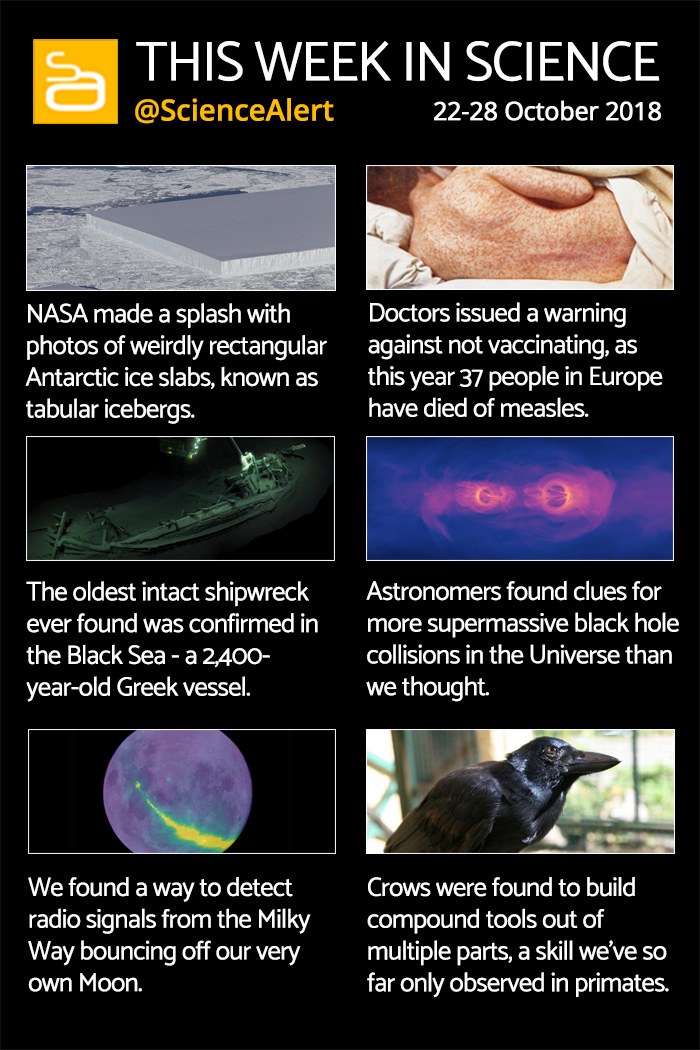 What The Heck Is The Deal With This Perfect Rectangular Antarctic Iceberg?

A tabular iceberg photographed by NASA's Operation IceBridge went viral this week, and for good reason - this perfectly natural formation looks like it was carved out by human (or alien) hands (tentacles?).

Because of Anti-Vaxxers, 37 People in Europe Have Died of Measles This Year

As Europe is grappling with a measles outbreak which threatens to spread to other parts of the world, doctors are once again speaking up about the dangers of anti-vaccination ideology. Measles is a preventable disease, folks.

A team of archaeologists has discovered what's thought to be the oldest intact shipwreck ever found, a 2,400-year-old ancient Greek vessel, deep down in the oxygen-poor waters of the Black Sea.

Astronomers have been suspecting that supermassive black holes can merge in spectacular fashions, and now a new study has provided evidence for this tantalising idea.

Crows Can Build Compound Tools Out of Multiple Parts, And Are You Even Surprised

This week, everyone's favourite ultra-smart bird, the New Caledonian crow, added another achievement to its list of accolades - the ability to put together a multi-part tool, all in the name of getting to snacks.

The signal was picked up by researchers in Australia. But even though that's awesome, it's not the end goal. The ultimate target is something much more elusive: they want to detect the extremely faint signal emanating from the hydrogen in the very earliest days of the Universe, in the time between the Big Bang and the Epoch of Reionisation (EoR), when the Universe's lights switched on.