Scientific Evidence Suggests The Simpsons Could Be Set in Australia 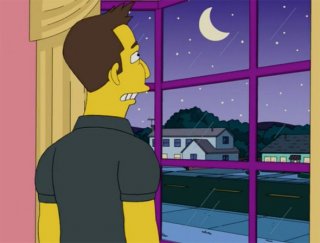 After 26 seasons of committed viewing, you'd be forgiven for thinking you know the Simpsons pretty well. Until one day astronomer Phil Plait comes along with a new hypothesis that blows everything you believed out of the water.

OK, that may sound a little dramatic. But, according to Plait, the Simpsons may not be set in the United States at all. In fact, it might not even be based on the same side of the planet. Over on his Bad Astronomy blog on Slate, Plait explains that Springfield may actually be located in the Southern Hemisphere.

It seems far-fetched, I know. But, my friends, there is evidence. While watching a recent episode guest starring everyone's favourite inventor, Elon Musk, Plait noticed something pretty shocking.

"But look at the Moon. LOOK AT THE MOON!

It's backwards. The scene is clearly at dinner, early evening, so that's the setting crescent new Moon. But in the Northern Hemisphere, the tips of a waxing crescent Moon point to the left, away from the Sun (that link describes how the phases of the Moon relate to the time of day and the Moon's position in the sky)…

But in that scene with Musk, they point to the right! How can that be?

He even shares a photo he took himself of the Moon in a similar phase in 2013 as proof.

Of course, there's the possibility that the animators just got the Moon back to front this one time. To be fair, they did base a whole storyline about Bart wanting to find out which way the water goes down the drain in the Southern Hemisphere, which resulted in the Simpsons visiting Australia.

But, then again, they're a pretty clever team. They even managed to pseudosolve an equation deemed 'unsolveable' by Fermat's Last Theorem on the show, so we think Plait might be onto something here (and we always appreciate a sense of humour in science).

What's really worrying is that, if it's true, the conspiracy probably extends way past Springfield. As Plait notes: "I suspect Elon knew this whole time. He builds rockets for a living."

Matt Groening, we're onto you.

Find out more about the phases of the Moon in episode four of Plait's Crash Course Astronomy.

Read this next: A study by Maggie Simpson and Edna Krabappel has been accepted by two scientific journals