Scientists Are Pushing Wild Climate Hacking Scenarios to Save The Planet

While the planet is working on cutting emissions to curb climate change, some scientists are saying we can also help our planet out by directly messing with our atmosphere.

Collectively known as geoengineering, these technology-based climate hacks could be our ticket to actively cooling down the planet, but they are untested and potentially dangerous, and therefore have remained controversial for decades. And yet scientists keep bringing them up.

Now an international team of researchers has run the numbers on how we might stabilise global temperatures by using a 'cocktail' of solar geoengineering tools intended for deflecting solar radiation away from the planet.

The scientists modelled what would happen if we used sulphate particles to scatter the sun's rays in the atmosphere and simultaneously thinned out sunlight-reflecting clouds to reduce warming.

"As far as I know, this is the first study to try to model using two different geoengineering approaches simultaneously to try to improve the overall fit of the technology," says one of the team, Ken Caldeira from Carnegie Institution, US.

The simulations showed that this cocktail could decrease temperatures back to pre-industrial levels without dramatically increasing rainfall. But there are caveats - the team worked under the assumption that the methods would work as predicted, without unexpected drama.

"A thorough investigation of these potential side effects is .. beyond our scope," they write in the study.

There's actually been a flurry of talk about solar geoengineering lately. In fact, one of the strategies suggested for this 'cocktail' was discussed just last week in Science.

Ulrike Lohmann and Blaž Gasparini from the Swiss Institute of Atmospheric and Climate Science explained how exactly we can thin out the wispy high-atmosphere cirrus clouds that don't reflect much solar radiation, but still manage to trap quite a lot of heat.

They propose 'seeding' these clouds - planting large particles such as desert dust or pollen that essentially help break up the cirrus formations, thinning them out and decreasing their heat-trapping potential. 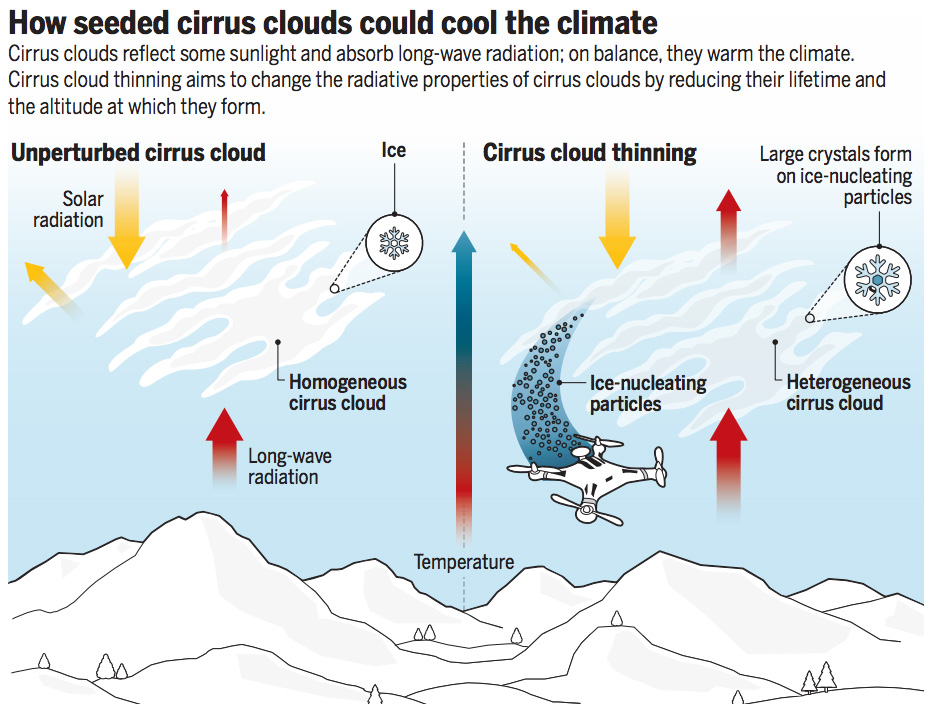 Meanwhile Ulrike Niemeier from Max Planck Institute in Germany and Simone Tilmes from US National Center for Atmospheric Research suggested that if we reach a point when drastic interventions are necessary to prevent the worst effects of climate change, we could consider mimicking a volcanic eruption to cool things down.

This technique relies on continuously injecting sulphur into the stratosphere, which creates dense clouds better capable of reflecting solar radiation. We would need loads of sulphur though. The team calculates it would take 6,700 flights per day to deliver the sulphur to the stratosphere, costing about US$20 billion per year.

And that's not all. Earlier this month a team from the University of Washington proposed an early-stage test for 'marine cloud brightening'.

This involves spraying saltwater in the sky above a coastal area of the Pacific Ocean to produce large, long-lived bright white clouds good at reflecting the sun's light away from the planet's surface.

That sounds pretty nuts, but if we hear them out, turns out such a test (they are currently seeking funding for this caper) could also answer a vitally important question that's been bothering climate scientists.

When it comes to modelling climate change, clouds are actually some of the biggest spanners thrown in the works, because there's a lot of uncertainty over how human-produced aerosols affect them.

"To overcome these challenges, it would be extremely valuable to explore aerosol influences on clouds in situations where meteorological and source variability do not introduce confusion," the University of Washington researchers write in the paper.

By controlling every aspect of the particles injected into the marine clouds, not only could we potentially brighten them and reflect some sunlight, but also produce a 'controlled experiment'. The team proposes it could be an unprecedented source of data for climate models.

"Testing out marine cloud brightening would actually have some major benefits for addressing both questions," says lead researcher Rob Wood.

"Can we perturb the clouds in this way, and are the climate models correctly representing the relationship between clouds and aerosols?"

But when it comes to messing with our planet's atmosphere, the scientists discussing these techniques warn that there's a lot we don't know about the potential effects of such dramatic action.

That's why all these proposals are so controversial. If something goes wrong with any of the methods, we could make things worse. And geoengineering does nothing to alleviate our current greenhouse gas emissions problem.

"Climate intervention should only be seen as a supplement and not a replacement for greenhouse gas mitigation and decarbonisation efforts," Niemeier and Tilmes write in their paper.

That's if we're brave enough to do such intervention at all.

It's all pretty wacky stuff. But for the researchers who keep talking about these crazy climate hacking methods, desperate times may well call for desperate measures.

The papers have been published in Earth's Future, Geophysical Research Letters, and in Science here and here.