For the first time, scientists have unambiguously confirmed the collision of a black hole and a neutron star: The fateful moment two extreme objects come together in an event so immensely powerful, its ripples across the cosmos can still be discerned a billion years later.

Amazingly enough, this astronomical discovery has now been made not once, but twice, as an international collaboration of thousands of scientists reports.

"It's an awesome milestone for the nascent field of gravitational-wave astronomy," says astrophysicist Rory Smith from the ARC Centre of Excellence for Gravitational Wave Discovery (OzGrav) at Monash University.

"Neutron stars merging with black holes are amongst the most extreme phenomena in the Universe. Observing these collisions opens up new avenues to learn about fundamental physics, as well as how stars are born, live, and die." 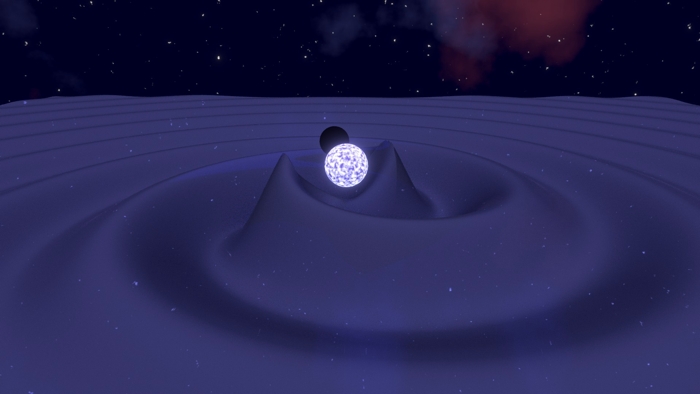 The virtually simultaneous discovery of the two events – called GW200105 and GW200115 – speaks to the speed with which the field of gravitational wave science is evolving.

But before now, a 'mixed' collision representing the merger of a neutron star with a black hole – called an NSBH binary – had never been confirmed, although scientists have previously picked up signals that were potentially suggestive of such a neutron star-black hole collision.

Now, however, the discovery is unambiguous.

"In January 2020, the LIGO-Virgo detector network observed gravitational-wave signals from two compact binary inspirals which are consistent with neutron star-black hole binaries," researchers from the international LIGO, Virgo, and Kagra collaborations explain in the new study.

"These represent the first confident observations to date of NSBH binaries via any observational means."

This collision took place about 900 million years ago, even though we've only just detected the gravitational waves rippling out from the two objects merging.

GW200115, detected on 15 January 2020, is even more ancient, occurring when a NSBH binary system coalesced around 1 billion years ago in the merger of a 6-solar-mass black hole and a 1.5-solar-mass neutron star.

"These collisions have shaken the Universe to its core and we've detected the ripples they have sent hurtling through the cosmos," says astrophysicist Susan Scott from Australian National University (ANU).

"Each collision isn't just the coming together of two massive and dense objects. It's really like Pac-Man, with a black hole swallowing its companion neutron star whole."

These binary systems have been predicted to exist for decades, but have never been observed before. Now, thanks to the detection of gravitational waves from their collisions, we know that these pairs do exist, even though many questions still remain.

"We've now seen the first examples of black holes merging with neutron stars, so we know that they're out there," says gravitational-wave astronomer Maya Fishbach from Northwestern University.

"But there's still so much we don't know about neutron stars and black holes – how small or big they can get, how fast they can spin, how they pair off into merger partners. With future gravitational wave data, we will have the statistics to answer these questions, and ultimately learn how the most extreme objects in our Universe are made."