Scientists have discovered a rare type of galaxy some 359 million light-years away from Earth, with a unique circular structure that's never been identified before.

The galaxy, called PGC 1000714, is an example of what's called a ring galaxy – where an external circle of young stars surrounds an older galactic core.

But closer inspection of PGC 1000714 reveals its core is actually in the middle of not just one but two of these star rings, and it's the first time that astronomers have encountered the phenomenon.

The most common types of galaxies that we know about are broadly disc-shaped, with stars spread out either in a spiral formation like the Milky Way, or in an elliptical shape.

But other, irregular kinds of galaxies exist, including ring galaxies – the most famous example of which is called Hoag's Object (pictured below), discovered by astronomer Arthur Hoag in 1950. 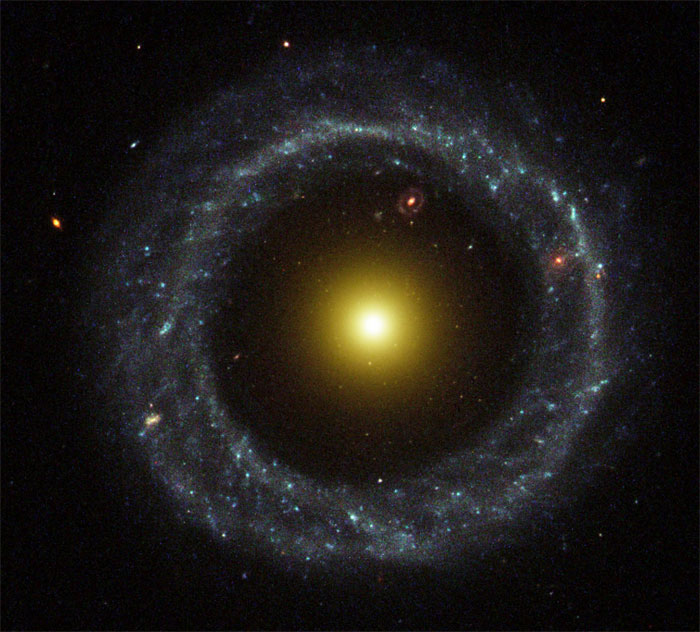 Unlike disc-shaped galaxies in which stars are generally spread and scattered out, the stars in ring galaxies are divided into two distinct camps: a ring of young blue stars that shine very brightly on the outside, surrounding a well-defined core of older, less luminous stars in the centre.

Ring galaxies in themselves are incredibly uncommon, so when the researchers who found PGC 1000714 realised it featured two of these star rings, they knew they had something pretty special on their hands.

"It was like spotting a snow leopard or some other rare and elusive animal," astrophysicist Patrick Treuthardt from the North Carolina Museum of Natural Sciences told Ashley Strickland at CNN.

"A Hoag-type galaxy, one with a single circular ring surrounding a round core, is already very rare, but finding one with potentially two very regular rings is quite unique."

Treuthardt and fellow researchers analysed PGC 1000714 using the Las Campanas Observatory in Chile, and found that the outer ring of blue stars is only about 0.13 billion years old, whereas the inner red core is much more ancient, at approximately 5.5 billion years old.

But during their investigation, they found evidence for a secondary ring of stars inside the outer ring of young blue stars. Upon closer analysis, this secondary structure is what Treuthardt calls "an older diffuse red inner ring", meaning the stars in it are way more ancient than the youngest outermost stars. And there doesn't seem to be anything connecting these two rings.

As for how this could have happened, nobody's entirely sure, but it makes for a completely unprecedented astronomical find.

"One estimate states that Hoag-type galaxies may make up 0.1 percent of observable galaxies, and it could be much less than that," says Treuthardt. "You would be more likely to be dealt four of a kind in a hand of five-card poker. This galaxy may be one of a kind."

The researchers speculate that PGC 1000714 as we now observe it may have come together through forces over at least two distinct time periods – although since we've never seen this kind of thing before, it's hard to know for certain.

"The different colours of the inner and outer ring suggest that this galaxy has experienced two different formation periods," one of the team, Burcin Mutlu-Pakdil, from the University of Minnesota Duluth, explains in a statement.

"From these initial single snapshots in time, it's impossible to know how the rings of this particular galaxy were formed."

The team thinks it's possible that the outer ring may have incorporated portions of a gas-rich galaxy that once existed nearby.

But it's also unclear how long these rings ultimately last for – and if they don't hold their formation for long, that could explain why ring galaxies are so rare in terms of human observations, Treuthardt suggests.

As for determining how the older inner ring got there, the scientists say we'll need more data to get to the bottom of this cosmic fluke.

"What we really need to do is actually probe the interior more," Treuthardt told Karolyn Coorsh at CTV News. "Maybe something came by and interacted with the galaxy to form these rings so we need to probe the gas that surrounds the galaxy as well."

While there's still an awful lot we don't know about PGC 1000714 and ring galaxies in general, the researchers say star systems like this that don't fit the regular pattern are hugely important to helping us understand more about the Universe and how it came to be the way it is.

"Outliers like PGC 1000714 challenge our theories," Treuthardt told CNN, "which is an important aspect of science."

The findings are reported in the Monthly Notices of the Royal Astronomical Society.