For something so commonplace, glass is actually an incredible mystery; an enigma of physics that has defied understanding since humans first encountered it millennia ago.

The reason is this: glass is no ordinary solid. But nor is it a liquid. It lies somewhere in between, a strange hybrid known as an amorphous solid – something that's firm to the touch, yet down at the atomic level, it actually behaves rather more like liquid.

But a breakthrough by scientists could now get us closer than ever before to understanding what's going on under the surface in glass, thanks to a new algorithm that can help predict glass's temperature-dependent properties.

This means we're a big step closer to predicting how glasses will behave at different temperatures, which in turn could help us figure out faster, better ways of discovering new kinds of materials, and understanding how glass on the whole exists the weird way that it does.

"It is amorphous and doesn't have an equilibrium structure, so it's constantly evolving by slow movements of its molecules." 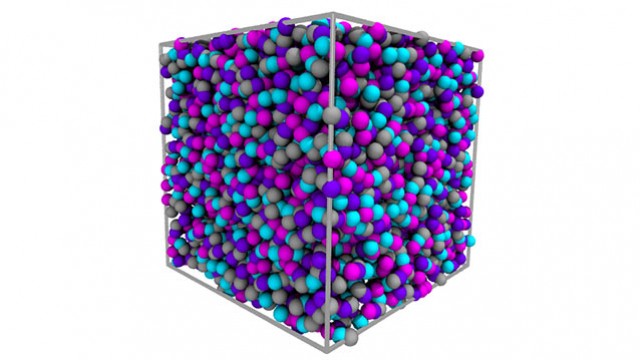 Because of those movements at the molecular level, glass never forms the ideal state of being a solid, in which atoms become arranged in an ordered and predictable crystalline structure.

With enough time, theoretically, glass might get there one day and achieve its ideal state of equilibrium, but it would take an extraordinarily long while – longer than centuries, scientists think – due to how slow the atomic processes are.

The other difficulty is temperature. Glass – meaning both silica-based glass, and other kinds of amorphous glassy materials, such as polymers – are also very susceptible to changes in temperature, which makes realising their idealised state even more unlikely.

Heat is one of the things that triggers what's known as the glass transition, in which heated amorphous solids change from their hard, glassy state when cool to a more liquid-like, viscous form.

That's a pretty cool (and reversible) trick, but it's something else that makes the physics of different kinds of glass hard to pin down.

"Because of the amorphous and disordered nature of glass, its properties could vary with temperature substantially, making the prediction of its physical behaviour extremely difficult," says engineer Wenjie Xia from North Dakota State University.

"Now, we have found a new way to solve this problem."

One of the challenges in materials science is devising ways to simulate how different kinds of glassy materials might behave when heated. Running these kinds of calculations takes a very long time, though, due to the molecular complexity of glass's disordered and variable structure.

With a new algorithm that makes use of coarse-grained (CG) modelling, however, the researchers say they were able to speed up the process by roughly a thousand times.

The technique achieves this by taking a step back.

Instead of trying to calculate the position and molecular bonds of each single atom, the researchers' energy renormalisation algorithm only tries to compute clusters of atoms, resulting in a broader view of the entropy and enthalpy affecting the system.

Testing their approach with three different kinds of glassy polymers – polybutadiene, polystyrene, and polycarbonate – the results showed that the coarse-grained simulations corresponded accurately with how these materials behave in the real world.

"Explaining the physics of glasses has famously been one of the biggest problems that scientists haven't been able to solve," says Keten.

"We're getting closer to understanding their behaviour and solving the mystery."