Weirdly, Some Small Islands Are Growing Bigger in The Face of Rising Seas

In the face of rising seas, low-lying islands appear to be entirely vulnerable. Surrounded by ocean on all sides – with tides growing ever taller over time – these isolated landforms look like they have no place to go.

Unless they can grow bigger. Strangely enough, some islands seem to be doing just that.

While it sounds incredible, many low-lying reef islands appear to be growing larger amidst the ongoing crisis of climate change – somehow expanding their footprint, rather than being swallowed by the swelling sea.

"Counter to predictions, popular media coverage and political proclamations, recent studies have shown the majority of reef islands studied have been stable or have increased in size since the mid-20th century," a research team, led by coastal geomorphologist Murray Ford from the University of Auckland in New Zealand, explains in a new study. 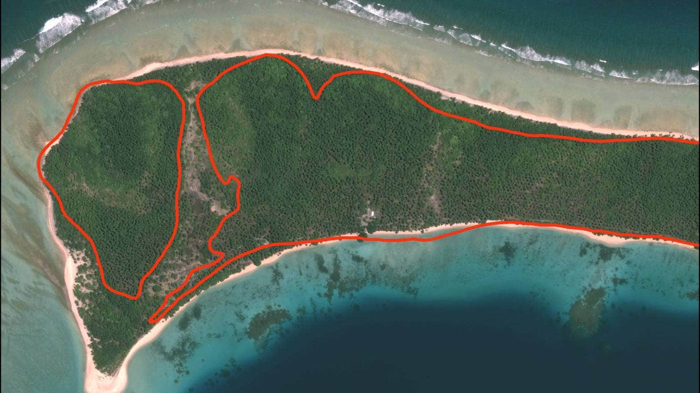 But just how exactly are these islands keeping their heads above water like this?

To find out, Ford and fellow researchers investigated Jeh Island, one of the 56 islands that make up the Ailinglaplap Atoll, a coral atoll that is part of the Marshall Islands – a republic of low-lying islands considered to be among the most endangered nations on Earth due to rising sea levels.

While we can't deny rising seas are posing serious problems to vulnerable, low-lying countries, the science on small islands simply being swallowed en masse appears to be more complicated than many had expected.

"Such projections are founded on the assumption that islands are geologically static landforms that will simply drown as sea-level rises," Ford, along with his co-authors, explained in another study published last year.

That assumption turns out to be flawed. A 2018 analysis of 30 coral atolls in the Pacific and Indian Oceans – encompassing 709 islands in total – found that 88.6 percent of the islands were either stable or increased in area in recent decades, and that none of the atolls had lost land area overall. 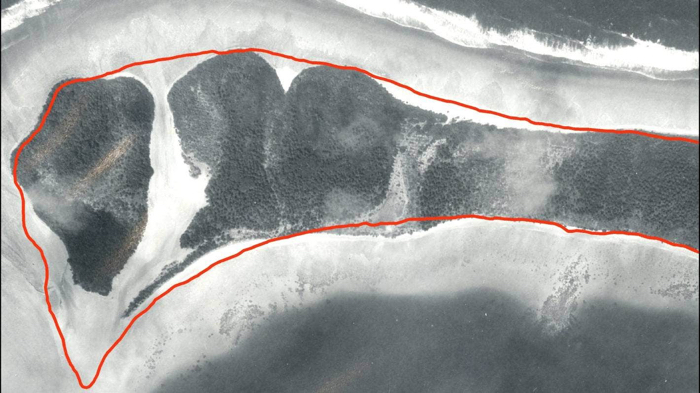 Jeh Island in 1943, with today's outline in red. (US National Archives)

"That started a bit of a goldrush in terms of studies," Ford told CNN this week. "The signal was kind of consistent – there's no widespread chronic erosion of atoll islands in the Pacific."

Even so, it's never been entirely clear how these islands, which form from sediment that builds up around coral reefs, grow the way they do.

We know that they are growing both outwardly and perhaps upwardly – since global sea levels have risen by about 20 centimetres (8 inches) since 1900 – but where does the extra sediment that makes these landmasses come from? Is it freshly produced material from the reef, or ancient leftover sands that are somehow being washed up onto the coral formations?

In the new research, Ford and his team examined Jeh Island as a case study, comparing both aerial and satellite imagery of the island from above, as well as collecting island sediments to date samples of newly formed landmass.

The remote-sensing data indicate that Jeh Island has increased in land area by about 13 percent since 1943, growing from 2.02 square kilometres (0.78 square miles) to 2.28 square kilometres (0.88 square miles) in 2015. What's more, the current island may once have been more than one island, with new sediment now joining what looks to have once been four separate landmasses.

In addition, samples collected from the island suggest that the new parts of Jeh are recently generated organic material produced by the reef, as opposed to older sediment being reworked into the island's structure.

While the researchers say we can't know for sure whether the same process may be at work on other islands, the findings suggest that reef systems with healthy sediment production regimes should be able to keep growing despite sea-level rise.

"The coral reefs which surround these islands [are] the engine room of island growth, producing sediment which is washed up on the island shoreline," Ford explains. "Healthy coral reefs are essential for this process to continue into the future."

Of course, healthy coral reefs themselves aren't exactly a given these days. Which raises the million-dollar question: how long can this unexpected phenomenon go on for, and how fast? Can islands, even self-growing ones, keep pace with accelerated sea-level rise in the future?

Jeh Island can't answer that one, at least not now. But it's helped to pave the way for some important new insights - ones that scientists will need to incorporate into their thinking about reef islands.

"Existing models consider an island as a singular form from an embryonic state until fully developed, typically over millennial timescales," the authors write.

"Our observations and dates present an additional mechanism for island formation, one in which present-day islands can be the product of the merging of several smaller islands which each may have formed at different times."