We all know that cephalopods are wicked smart, and their complex nerve systems go some way to explain their aptitudes. Now, a first-of-its-kind magnetic resonance imaging study of squid brains confirms just how rich the connections in their brains truly are.

"The modern cephalopods, a group including octopus, cuttlefish and squid, have famously complex brains, approaching that of a dog and surpassing mice and rats, at least in neuronal number," said neurobiologist Wen-Sung Chung of the University of Queensland's Queensland Brain Institute (QBI) in Australia.

"For example, some cephalopods have more than 500 million neurons, compared to 200 million for a rat and 20,000 for a normal mollusc."

We all know that neural complexity doesn't necessarily correlate with intelligence as we know it; but we also know that dogs have rather dense cerebral cortices, so it's amazing to see how closely some cephalopods trail behind them in terms of brain connections. 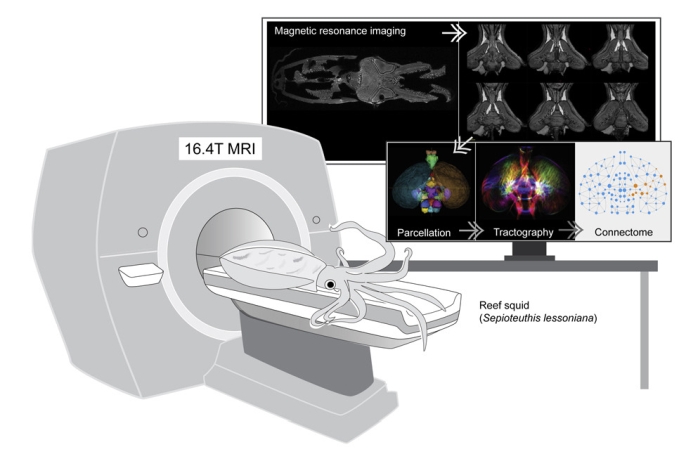 Preserved squid samples were stained with silver dye or multicoloured fluorescent neural tracers, which allowed the researchers to map the neural pathways. These techniques allowed them to confirm over 99 percent of the 282 major pathways that had already been identified.

They also identified 145 new, previously unknown major neural pathways. Of these, more than 60 percent are linked to the vision and motor systems - which could helps us to understand the mad camouflage skills of squid.

"We can see that a lot of neural circuits are dedicated to camouflage and visual communication," said Chung.

"[This gives] the squid a unique ability to evade predators, hunt and conspecific-communicate with dynamic colour changes."

How cephalopods see is a fascinating mystery. Technically, they are colourblind, as Chung and his colleague neurobiologist Justin Marshall, also of QBI, previously demonstrated "beyond doubt".

But they do seem to be able to perceive colour in some way. Just look at how octopuses change colour to perfectly match their surroundings. Or how squids communicate by flashing colours at each other.

This research seems to have found some of the pathways associated with that visual processing and the behaviours it enables, as well as the possible structure in the brain responsible for coordinating vision and camouflage.

"The similarity with the better-studied vertebrate nervous system allows us to make new predictions about the cephalopod nervous system at the behavioural level," Chung said.

"For example, this study proposes several new networks of neurons in charge of visually-guided behaviours such as locomotion and countershading camouflage - when squid display different colours on the top and bottom of their bodies to blend into the background whether they are being viewed from above or below."

This research forms part of a long-term project to understand how cephalopod brains and intelligence work, since they are so very different from our own, and the brains of other vertebrates.

As the researchers wrote in their paper, "the apparently complex cognitive tasks cephalopods perform need this kind of solid background evidence before anthropomorphic speculations lead to misconceptions around these unique and wonderful creatures."