An experimental US Air Force space plane called the X-37B Orbital Test Vehicle (OTV) has landed after a record-breaking 718 days in orbit, but with military officials keeping tight-lipped about the specific details of the operation, we're no closer to understanding the objectives of its secretive mission.

X-37B OTV-4 touched down at NASA's Kennedy Space Centre Shuttle Landing Facility at 7.47am ET on Sunday, rocking Floridians with a sonic boom before landing on a runway that hadn't been used for an orbital mission since the end of the Space Shuttle program in 2011.

The solar-powered, uncrewed vehicle, which looks like a miniature, windowless space shuttle, is the fourth X-37B flight since the Air Force inherited the craft's design specs from NASA and DARPA (Defence Advanced Research Projects Agency) in 2006.

Beginning in 2010, the Air Force has launched a series of classified orbital missions with the X-37B, each running longer than the last. This is the fourth aircraft of its kind – thus, the OTV-4 name. 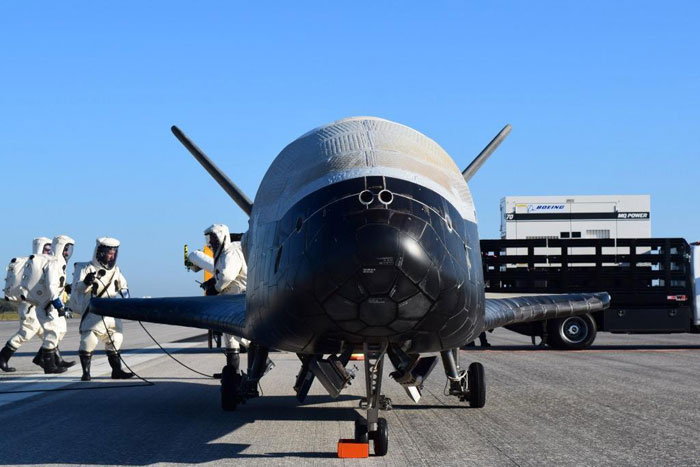 While the vehicle has an official orbit window of 270 days, the Air Force has been pushing the envelope with its clandestine space drone, with the latest mission, launched on 20 May 2015, eclipsing the 674-day record set by X-37B OTV-3 in 2014.

According to the Air Force, the X-37B's primary objectives are to research reusable spacecraft technologies for America's future in space, and to conduct experiments that can be returned to, and examined, on Earth.

Beyond that, officials haven't given up much actual dirt on the specifics of its orbital experiments, leading to fervent speculation that the military might be testing an EM Drive in space – a hypothetical fuel-less propulsion system that's been studied by NASA, and which China claims it's already testing.

Other speculation has suggested the Air Force might be using the X-37B for weapons research or orbital surveillance operations – although as far back 2010 the Air Force denied that the program involved any "offensive capabilities".

Prior to the latest X-37B launch in 2015, the Air Force did disclose that one of the experiments aboard OTV-4 involved researching Hall-effect thrust propulsion, while another was a materials science project for NASA.

The #X37B #OTV4 is the newest and most advanced re-entry spacecraft. Find out more about today's landing here: https://t.co/GUGgOMQiYg pic.twitter.com/HfHHVnWhYc

Beyond that, we're at a bit of a loss to explain just what this top-secret orbital vehicle has been doing for almost two years above our heads. And now that it's landed, it's unlikely the speculation will cease until the Air Force becomes a little bit more forthcoming with the particulars.

"What's interesting to me is it's being done in such an opaque manner," space policy analyst Joan Johnson-Freese from the US Naval War College told CBS News in 2015.

"If the Chinese were doing this, oh my god, there would be congressional hearings on a daily basis and programs being ginned up to respond to it," says Johnson-Freese.

"It has capabilities that other countries aren't sure about, and so they're going to be very nervous about them. If it's a highly manoeuvrable space vehicle, that has some pretty significant implications."