The funny thing about the discovery of Proxima b - the closest planet to our Solar System, which is also rocky, Earth-sized, and potentially habitable - is that nobody has actually seen it.

Astronomers know it exists because they have seen its gravity tug on and 'wiggle' Proxima Centauri, the red dwarf star that it orbits. But no telescopes in space or on the ground, nor any in serious stages of planning, can directly photograph Proxima b.

It's very distant at 4.2 light-years away from us. Also, its 'year' lasts only 11.2 days - an orbit too tight to pick out a planet from the blinding glare of a star.

However, a photograph isn't necessary to ask the most important question about Proxima b, a world that Scientific American has (optimistically) deemed "the Earth next door": does it have an atmosphere, or is it an airless, barren wasteland like the Moon?

Two researchers at Harvard believe that NASA's James Webb Space Telescope (JWST), scheduled to launch in 2018, could get the job done in record time, and by merely sampling the star system's light.

"It would only take a day's worth of observing time," Avi Loeb, an astrophysicist at Harvard University, told Business Insider.

"With the light we detect, we can ask if this world looks like a bare rock. If it doesn't, there might be an atmosphere, and there might also be an ocean, which life requires," says Loeb, who co-authored a pre-print study on arXiv.org with Laura Kreidberg, a Harvard astronomer who studies exoplanet atmospheres.

How to sniff out Proxima b's atmosphere 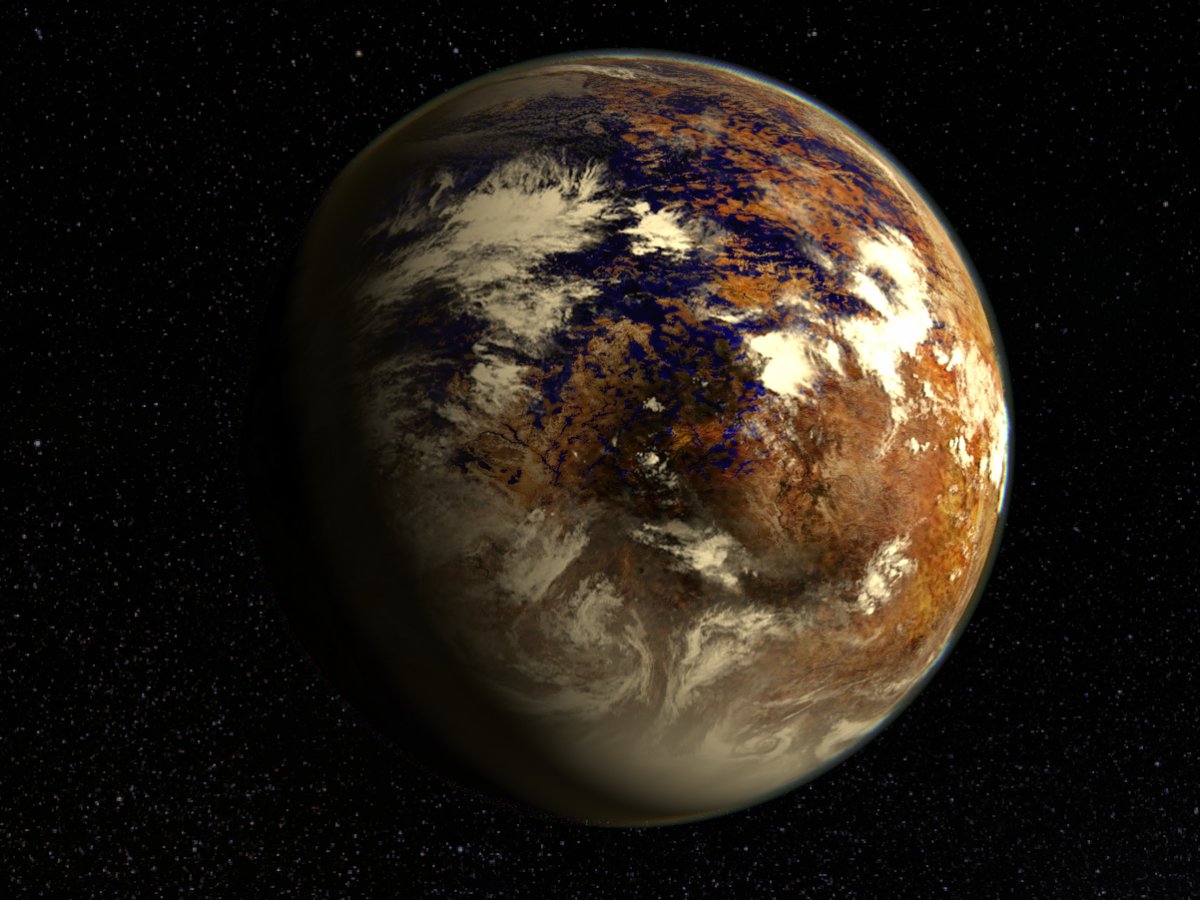 An artist's depiction of Proxima b. Credit: The Planetary Habitability Laboratory

Proxima b orbits Proxima Centauri in a Goldilocks-like habitable zone, where the strength of light is just right to melt water.

However, its close distance to the star - just 4 million miles away, or roughly 17 times as far as Earth is from the Moon - comes with a worrisome consequence.

Astronomers think Proxima b is tidally locked like the Moon, where one side of the world always faces Earth. But instead of always facing Earth, one side of Proxima b always faces its star: awash in permanent daylight, the other side trapped in an endless cold night.

If Proxima b does have an atmosphere, though, says Loeb, it'd not only circulate warmth from the day side to the night side, but also prevent the planet's water from boiling off into space.

What a tidally locked habitable Proxima b might look like, also called an 'eyeball Earth'. A ring of habitability could exist between the day and night sides. Credit: Beau.TheConsortium/Wikia (CC-BY-SA)

"We basically asked ourselves, 'what would a tidally locked Earth look like if you put it right next to Proxima Centauri?'" he said. "Clouds, wind, and water make that question complicated," he added, but said you could at least tell if it's a bare rock or is circulating heat using air.

"On Earth, at least a third of the heat is redistributed by the ocean and atmosphere," Loeb said.

He believes the trick to ruling out an atmosphere is to focus on infrared light - the same 'colour' of warm, invisible light that our bodies constantly emit.

And it just so happens that NASA's James Webb Space Telescope is specially designed to observe infrared light.

So instead of trying to find a tiny planet in a flood of visible light, JWST may only need to hunt for specific wavelengths of infrared light.

If Loeb and Kreidberg's hypothetical observation reveals that the dark side of Proxima b isn't as cold as it should be, that would mean an atmosphere may be hugging the planet - and redistributing warmth to the night side.

If it doesn't, Proxima b may be a bare, lifeless rock.

Whatever the results, they will be crucial: red dwarf stars outnumber all other types of stars in our Milky Way galaxy by four-to-one. "Situations like this must be common," Loeb says. "If you turn one stone and find a bug, there must be others around."

"It's not something we can guarantee"

Although Loeb and Kreidberg's research has not yet been peer-reviewed, two leading scientists we contacted said it's "very promising work", "a good study", and "the best proposal on the table so far" - despite a number of uncertainties and hang-ups.

Ed Turner, an astrophysicist at Princeton University, told Business Insider that the study makes a lot of "ideal" assumptions about Proxima b.

"We've spent decades trying to figure out our own world's atmosphere, in terms of global warming and climate change. And now we're talking about studying an alien world," said Turner, who has worked with at least seven major observatories, including the Hubble Space Telescope.

"But the basic idea seems like a good one."

He said the biggest snag with Loeb and Kreidberg's method is that we don't yet know the inclination or 'tilt' of Proxima b's orbit around its star.

"This assumes we're not looking down on the planet," Turner said. If that's the case - and we can only see its north or south pole - JWST wouldn't get clear day- and night-side views, or the evidence required to prove an atmosphere exists. "It's statistically unlikely, but possible."

And even if the method does work, Turner noted it couldn't tell you much about the atmosphere. The planet might be cosy like Earth, or a blazing hellhole like Venus (which has an atmosphere that's 90 times thicker) - and no one would be the wiser.

Mark Clampin, an exoplanet scientist at NASA and a project scientist for JWST, said the idea is "exciting", but emphasised the fact that NASA needs to get the tennis court-size telescope off the ground first.

"The telescope's instruments were designed in a time when we weren't doing these kinds of observations, so we'd really be pushing the limits of what can be done," Clampin told Business Insider. "We have to understand how the detectors perform in space. Until we can launch and fly JWST, it's not something we can guarantee."

Nevertheless, Clampin said he is "ready to take a shot at Proxima b with JWST" and that it's now the observatory's "target number one".

Both Turner and Loeb said timing is also a legitimate concern, given years of delays with JWST - the telescope was originally supposed to launch in 2011.

If the project sees further delays, monster telescopes like the European Extremely Large Telescope or Thirty Metre Telescope could pick up the slack.

But no such colossal observatory is slated to open for the next 10 years, give or take a couple of years.

"JWST could give something we can chew on for a decade, until those telescopes come online," said Loeb.

Loeb's obsession with Proxima b - and the presence of its atmosphere - goes well beyond your standard flavour of scientific curiosity.

"I'm trying to encourage my friends to buy property on Proxima b," Loeb said, joking. "[W]e'll either destroy our own planet, or a natural catastrophe like an asteroid will. And if that doesn't [kill us], the Sun warming us too much will."

With the help of Russian billionaire Yuri Milner, he's working on Breakthrough Starshot, a project that hopes to laser-propel 'nanocraft' toward the Proxima Centauri star system sometime in the next 20 to 30 years.

"A spacecraft equipped with a camera and various filters could take colour images of the planet and infer whether it is green (harbouring life as we know it), blue (with water oceans on its surface) or just brown (dry rock)," Loeb previously told Business Insider.

More from Business Insider:
Trending News
A New FRB Signal Has Buzzed Nearly 2,000 Times in Just Two Months, Raising a Mystery Space4 days ago
There's Trouble Bubbling Up in Newly Formed Alaskan Lakes, And Scientists Are Worried Environment5 days ago
Does IQ Decline as We Age? One Type of Intelligence Peaks in Your Twenties Humans6 days ago