The LHC Has Been Restarted! Here's How It Could Change Physics Forever

The revamped Large Hadron Collider (LHC), the monstrous underground atom smasher that hurls particles at near light speed, turned back on this weekend after two years.

The LHC already revolutionised physics with the discovery of the Higgs boson. Now the revamped particle smasher is 60 percent more powerful than before, and it's poised to change what we know about the Universe yet again.

"Now is a very exciting time to be a physicist," Jon Butterworth, a physics professor at University College London, said during a public lecture at the Perimeter Institute on April 2 discussing the next LHC run.

Butterworth explained some of the biggest mysteries in physics that the LHC could help solve when it gets revved up again:

The Higgs boson was the last particle predicted by the reigning theory in particle physics: the standard model. Scientists have known for a long time that this is an incomplete theory though.

Supersymmetry predicts that a yet-to-be-discovered partner particle for every particle within the standard model exists. The new and improved LHC will be shooting protons at each other into head-on collisions that generate intensely hot clouds full of exotic subatomic particles. Physicists hope they will see evidence of these supersymmetric particles in the clouds from the high speed collisions. 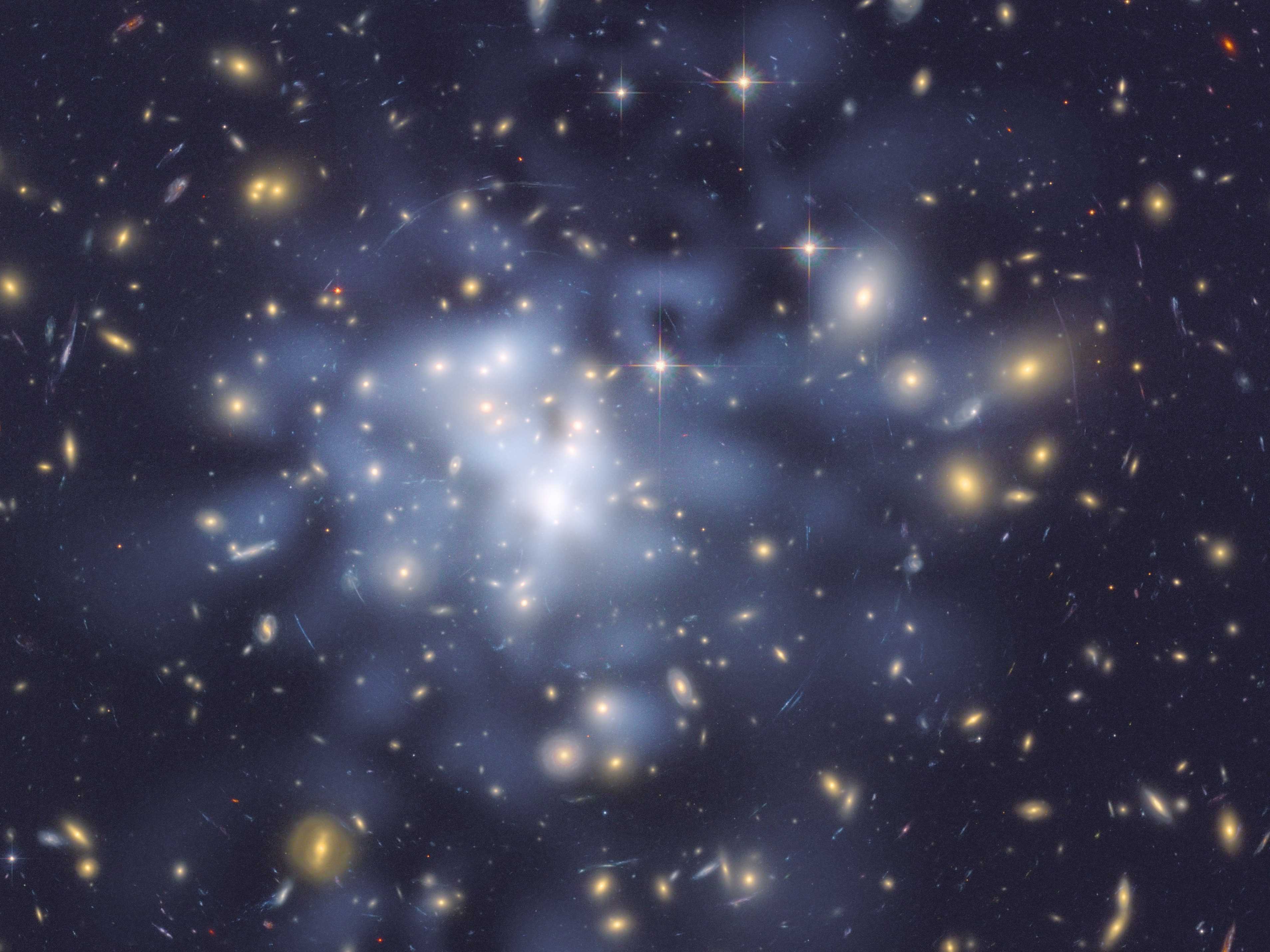 The foggy haze is an astronomer's interpretation of where dark matter is located in this galaxy cluster. Image: NASA & ESA

A mysterious, invisible, and so far undetected substance makes up more than a quarter of our Universe. It's called dark matter, and its discovery would be just as important to physics as that of the Higgs boson.

"When you look at a galaxy you're only seeing a very small part of its mass," Butterworth said. The rest is tied up in dark matter.

There's still no direct or observational evidence that it exists though. Physicists know that it's not made up of any type of particle that we already know about. One of the particles that supersymmetry predicts is the perfect candidate for a dark matter particle. Physicists think it must be a really heavy particle that requires a really powerful collision (that's why we didn't see it in the first LHC run) and that it weakly interacts with other particles (which is why we haven't been able to observe it).

Physics tells us that every single particle has an antiparticle partner. That means that the Big Bang should have produced an equal amount of matter and antimatter, Butterworth said.

All that antimatter is MIA, and the LHC will be studying matter and antimatter particles in more depth to try and solve the mystery. "It's very clear that gravity doesn't work with the standard model," Butterworth said.

Gravity isn't even represented by any of the particles that we know about. Some physicist think a gravity particle exists (called a "graviton") and we may find evidence of it in the new and improved LHC.

Some physicists even have a wild theory that gravity from our Universe is seeping into extra dimensions that we can't see, and we'd find evidence for this in microscopic black holes that could pop up in the LHC and disappear almost immediately.

When cosmologists figured out that the Universe is still expanding, and continuing to expand at an increasing rate, it marked a revolution in the field.

It also caused another problem for gravity. If gravity exists, there must be some other force that is fuelling this rapid expansion of the Universe. Physicists refer to this force as dark energy, but we know very little about it.

Some think it's tied up in supersymmetry, and the much faster and more powerful particle collisions in the LHC could reveal some insights.

Discovering more about dark energy will "hopefully lead to a revolution in gravity and quantum mechanics," Butterworth said.

The LHC will take a few months to get revved up to maximum power, but when it does, it's possible that we could find something that turns all of physics on its head.