At first glance, the panda doesn't seem to have the same sort of camouflage protection as, say, some lizards or many underwater creatures – but a new study demonstrates how the colors of the giant panda's fur help it to blend into the background very effectively indeed.

While this isn't a completely new idea, it's the first time that the camouflage capabilities of the giant panda (Ailuropoda melanoleuca) have been put to the test in a series of advanced image analysis techniques, using rare photos of pandas in their natural habitat.

And it's when you see the animals in the mountain forests that they call home that you can really tell how effective the shades of their fur are at keeping them hidden from view – something that the image processing algorithms used here confirm. 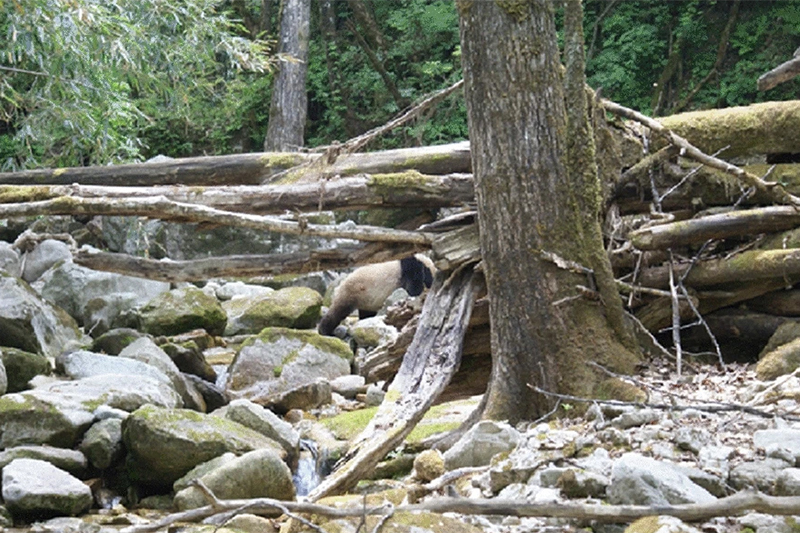 Spot the panda… one of the images used in the study. (FuWen Wei)

"It seems that giant pandas appear conspicuous to us because of short viewing distances and odd backgrounds," says psychologist Nick Scott-Samuel from the University of Bristol in the UK. "When we see them, either in photographs or at the zoo, it is almost always from close up, and often against a backdrop that doesn't reflect their natural habitat."

"From a more realistic predator's perspective, the giant panda is actually rather well camouflaged."

The team found that the black patches of fur help the giant panda to blend in well with tree trunks and darker areas of the forest, while the white patches match up with the waxy, specular lighting of foliage during the summer and snow during the winter. Some pandas also have brown pale patches that act as a sort of intermediate camouflage color.

Something else the researchers discovered in this study was that the large, distinct black and white patches of fur make the giant panda harder to spot because of a camouflage technique called disruptive coloration: Basically, these patches break up the visual outline of the animal.

The final piece of the research was a comparative analysis with other animals that are widely considered to be well camouflaged. The panda was able to hold its own against these species when a special color map technique known as the Quantitative Color and Pattern Analysis (QCPA) was used on the images.

Spot the panda again… another of the images used in the study. (FuWen Wei)

As suggested by the name, the QCPA approach weighs up both color and pattern together, as well as luminance. It weighs up how colors are placed alongside each other, how well-defined edges of patterns are, the levels of contrast between areas, and much more.

"The rare photographic evidence allowed us to examine the giant panda appearance in its natural environment for the first time," says biologist Ossi Nokelainen, from the University of Jyväskylä in Finland.

"With help of the state-of-the-art image analysis, we were able to treat these images as if the pandas would have been seen by their predator surrogates using applied vision modeling techniques and also to explore their disruptive coloration."

Nokelainen says the new study helps to "bust the myth" that pandas stand out when they're being watched in their natural habitat. What you might see in a close-up photo taken in a zoo doesn't really reflect the environment that pandas live in in the wild.

Remember that humans aren't the ones hunting the giant panda. They have predators such as tigers, leopards, and wild dogs, especially as panda cubs, and none of those animals have vision that's as good as ours.

"I knew we were on to something when our Chinese colleagues sent us photographs from the wild and I couldn't see the giant panda in the picture," says biologist Tim Caro, from the University of Bristol.

"If I couldn't see it with my good primate eyes, that meant that would-be carnivorous predators with their poorer eyesight might not be able to see it either. It was simply a matter of demonstrating this objectively."