Galaxies are a bit like fingerprints, or snowflakes. There are many of them out there, and they can have a lot of characteristics in common, but no two are exactly alike.

So, back in 2013, when two galaxies were spotted side-by-side in the distant reaches of the Universe, and which looked to be startlingly similar, astronomers were flummoxed.

Now, they've finally solved the mystery of these strange "identical objects" – and the answer could have implications for understanding dark matter.

The object, now named Hamilton's Object, was discovered by astronomer Timothy Hamilton of Shawnee State University by accident, in data obtained by the Hubble Space Telescope nearly a decade ago.

The two galaxies appeared to be the same shape, and had the same nearly parallel dark streaks across the galactic bulge – the central region of the galaxy where most of the stars live.

"We were really stumped," Hamilton said. "My first thought was that maybe they were interacting galaxies with tidally stretched-out arms. It didn't really fit well, but I didn't know what else to think."

It wasn't until 2015 that a more plausible answer would emerge. Astronomer Richard Griffiths of the University of Hawaii, on seeing Hamilton present his object at a meeting, suggested that the culprit might be a rare phenomenon: gravitational lensing.

This is a phenomenon that results purely from a chance alignment of massive objects in space. If a massive object sits directly between us and a more distant object, a magnification effect occurs due to the gravitational curvature of space-time around the closer object.

Any light that then travels through this space-time follows this curvature and enters our telescopes smeared and distorted to varying degrees – but also often magnified and duplicated. This made a lot more sense than two identical galaxies, especially when Griffiths found yet another duplication of the galaxy (as can be seen in the picture below).

A huge problem, however, remained: What was causing the gravitational curvature? So Griffiths and his team set about searching sky survey data for an object massive enough to produce the lensing effect.

And they found it. Between us and Hamilton's Object lurks a cluster of galaxies that had only been poorly documented. Usually, these discoveries go the other way – first the cluster is identified, and then astronomers go looking for lensed galaxies behind them.

The galaxy itself is a barred spiral galaxy with its edge facing us, undergoing clumpy and uneven star formation, the researchers determined. Computer simulations then helped determine that the three duplicated images could only be created if the distribution of dark matter is smooth at small scales. 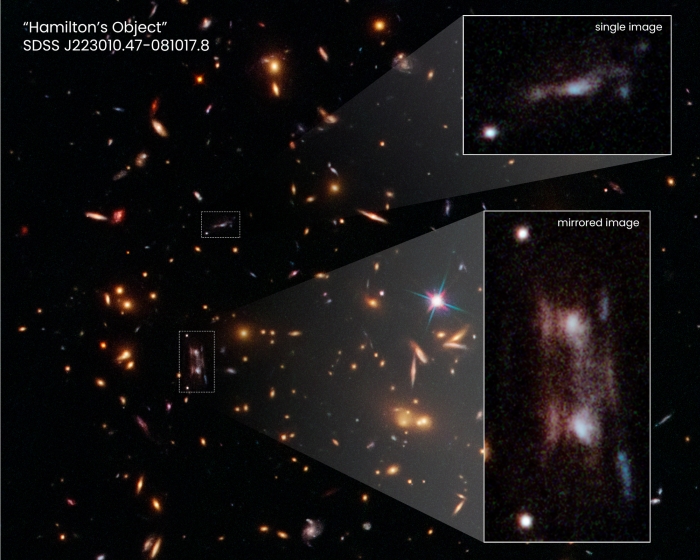 "It's great that we only need two mirror images in order to get the scale of how clumpy or not dark matter can be at these positions," said astronomer Jenny Wagner of the University of Heidelberg in Germany.

"Here, we don't use any lens models. We just take the observables of the multiple images and the fact they can be transformed into one another. They can be folded into one another by our method. This already gives us an idea of how smooth the dark matter needs to be at these two positions."

The two identical side-by-side images were created because they straddle a "ripple" in space-time – an area of greatest magnification created by the gravity of a filament of dark matter. Such filaments are thought to connect the Universe in a vast, invisible cosmic web, joining galaxies and galaxy clusters and feeding them with hydrogen gas.

But we don't actually know what dark matter is, so any new discovery that lets us map where it is, how it's distributed, and how it affects the space around it is another drop of evidence that will ultimately help us solve the mystery.

"We know it's some form of matter, but we have no idea what the constituent particle is," Griffiths explained.

"So we don't know how it behaves at all. We just know that it has mass and is subject to gravity. The significance of the limits of size on the clumping or smoothness is that it gives us some clues as to what the particle might be. The smaller the dark matter clumps, the more massive the particles must be."