It's no secret that renewable energy sources such as solar and wind are getting cheaper and more efficient by the day, and as a result, countries around the world are increasingly beginning to embrace the technology. In fact, there's now more capacity for renewable energy being added each year than coal, natural gas, and oil combined, which is a really huge deal.

Even better, a new report by the International Energy Agency (IEA) suggests that this trend isn't going to slow down any time soon. Taking into account projections for the global economy, energy market and fossil fuel prices over the next five years, the study predicts that the planet will get 26 percent - more than a quarter! - of its energy from renewable sources by 2020.

At the moment, the planet gets around 22 percent of its energy from clean sources, predominantly solar, hydro and wind energy. So getting up to just over a quarter isn't a huge leap in the grand scheme of things, but the IEA calls it "a remarkable shift in a very limited period of time". And if nothing else, it's proof that incentives to install renewable energy around the world are working.

The prediction is based on the assumption that the world will add 700 gigagwatts - which is a billion watts - of renewable energy capacity by the end of the decade. To put that into perspective, the IEA notes: "By 2020, the amount of global electricity generation coming from renewable energy will be higher than today's combined electricity demand of China, India and Brazil." It's also enough energy to power the entire nation of Japan twice over.

The agency came up with this figure after studying the trends over the past decade, and then closely monitoring future expectations, as well as already proposed renewable installations. 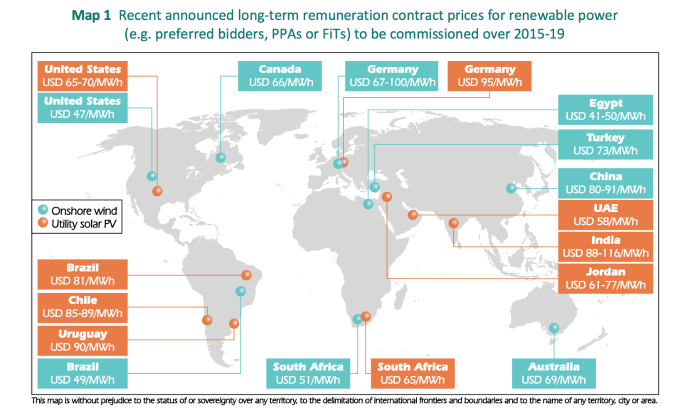 And just in case you were wondering, the IEA - which was formed after the 1973 oil crisis to offer independent advice to governments - is known for being conservative, so it's highly unlikely that these predictions are inflated.

The new renewable energy will make up more two thirds of all new additions to the world's generation capacity, which means that fossil fuels are slowly dying out. Finally.

Even in the US, which has been notoriously slow to get behind renewables, the writing's on the wall. Brian Merchant reports for Motherboard that 40 percent of the coal plants that were running in the US five years ago have now been closed down. And countries like Sweden are moving towards weaning themselves off fossil fuels entirely.

But despite the progress, there's still a long way to go before we've added enough renewable energy to mitigate the effects of climate change. Getting a quarter of our energy needs from renewables is great, but that still means 75 percent of our electricity will come from burning fossil fuels and releasing CO2.

Scientists have shown that we have the potential and the technology to reach close to 100 percent reliance on renewable energy by 2050 if we made some huge policy changes worldwide. But as the IEA projections show, even though our renewable capacity is rapidly increasing, it's not growing fast enough just yet to reach that goal.

"Renewables are poised to seize the crucial top spot in global power supply growth, but this is hardly time for complacency," IEA Executive Director Fatih Birol said at a press conference. "Governments must remove the question marks over renewables if these technologies are to achieve their full potential, and put our energy system on a more secure, sustainable path."