Artist's impression of an intermediate black hole in front of a star cluster. (CfA/M. Weiss)
SPACE

Throughout the Universe, there are numerous examples of galaxies coming together in colossal mergers, a billion-year process that smears stars and gas across the surrounding space. For the most part, we know how this plays out - but we don't quite know what happens to the supermassive black holes within their galactic centres.

Astronomers think these two galactic cores could merge into one larger black hole, sending huge gravitational waves rippling out across spacetime. But if there's any asymmetry in the galactic merger, the newly forged black hole could be punted clean out of the galaxy and sent zooming across the Universe by gravitational wave recoil, taking a swarm of stars with it.

Such runaway objects, theorised in the late noughties, are called hypercompact stellar systems (HCSSs) - a supermassive black hole with a tight bunch of gravitationally bound stars, careening away into the cosmos.

The existence of HCSSs would be pretty convincing evidence of gravitational wave recoil. There's just one big old problem: we haven't conclusively found any, not yet anyway.

But what occurs on the larger scale should also occur on smaller scales. We know that stellar mass black holes can merge - thanks to gravitational wave interferometers, we've detected quite a few black hole mergers ringing out across the Universe.

This would produce a black hole in-between the stellar mass and supermassive classes - an intermediate mass black hole, between 100 and 10,000 times the mass of the Sun, with a retinue of stars: basically, a small HCSS.

Simulations predict there should be a few hundred of rogue black holes in the halo of a galaxy such as the Milky Way.

Which led astronomers from SRON Netherlands Institute for Space Research and Radboud University in the Netherlands to the idea that HCSSs may already have been picked up by previous surveys such as Gaia and the Sloan Digital Sky Survey, and are hiding somewhere in the data.

But when the team went to find out more, they realised no one had actually made any detailed predictions about what these hypercompact stellar clusters should look like. So even if they were in the data, there was no toolkit with which to identify them. 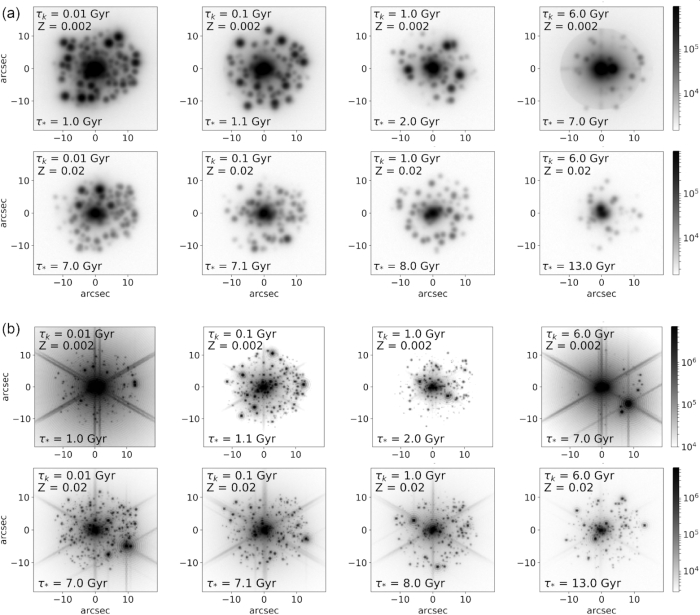 In a new paper, the team has simulated these clusters, producing detailed predictions of their colours, appearance, and spectra. And they've taken it a step further, tailoring these results to show how the clusters would appear in the data of nine separate ongoing surveys, as well as how they'd appear on a two-dimensional telescope image.

They haven't identified one of these clusters yet; that's the next step in their research. But they have published the results of their simulations, which means other astronomers can also now go looking.

If they do find them, it will be a big deal, and not just because of the gravitational wave recoil. Evidence of intermediate mass black holes is pretty thin on the ground - they're considered a black hole 'missing link' because, well, we have had trouble detecting any. There have been some pretty interesting detections that hint very strongly at their existence, but nothing conclusive.

We also don't know if supermassive black holes - those that are millions to billions of times the mass of the Sun, and form the cores of mature galaxies - can merge at all. Calculations suggest that by the time two orbiting supermassive black holes are one parsec (3.2 light-years) apart, their orbital energy keeps them swinging past each other in a stable orbit for potentially billions of years.

So, if we can find them, these elusive balls of stars could be the key to resolving quite a few space mysteries. We can hardly wait.