Black holes are sneaky. They lurk out there in the dark, not giving off any detectable radiation, making them very hard to find. But they have a weakness: they're extremely messy eaters. And this propensity has allowed astronomers to zero in on something elusive: the "missing link" middleweight black hole.

A colossal X-ray flare observed in 2006 was suspected to be the spillage from an intermediate-mass black hole - 50,000 times the mass of the Sun - as it tore apart and devoured a star. By eliminating a major competing hypothesis, researchers are now confident they're on the right track, and it's a pretty big deal.

Black holes are mysterious at the best of times. Because they emit no light, we can't see them, and we have to measure their properties based on the effect they have on the stuff around them - whether it's orbiting objects, or stuff they're actually accreting, a process that generates a great deal of heat and light.

We've had hints that intermediate-mass black holes are out there, but nothing conclusive. This new paper, according to its authors, is the best evidence yet.

That evidence hinges on a huge X-ray flare called 3XMM J215022.4−055108 (or J2150−0551 for short). While the light show had been going for three years already, the flare was first detected in 2006 by two powerful X-ray space telescopes -  NASA's Chandra X-ray Observatory and the European Space Agency's X-ray Multi-Mirror Mission (XMM-Newton). 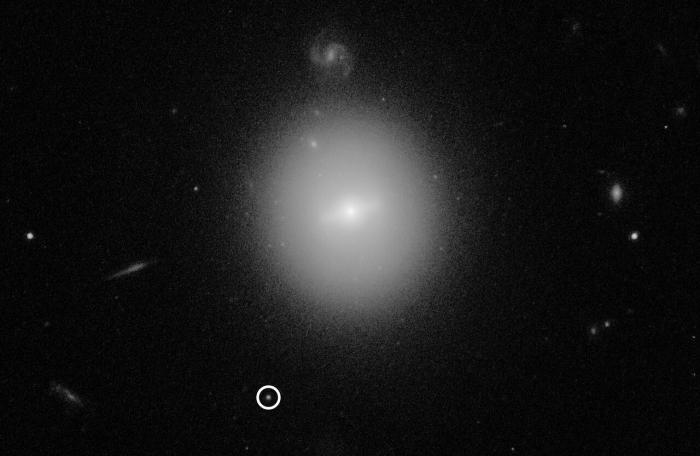 In 2018, physicist and astronomer Dacheng Lin of the University of New Hampshire and colleagues published a paper based on observations from these telescopes. The flare, they concluded, was likely the radiation blasted out as an intermediate-mass black hole devoured a star.

Now Lin and his team have obtained and analysed new multi-wavelength observations from XMM Newton and the Hubble Space Telescope. And they're more certain than ever that this is what caused the flare.

"Intermediate-mass black holes are very elusive objects, and so it is critical to carefully consider and rule out alternative explanations for each candidate," Lin said. "That is what Hubble has allowed us to do for our candidate."

One of the curious things about J2150−0551 was its location - not in the centre of a galaxy, where you normally find large black holes tearing apart stars. In fact, it seemed to come from a star cluster on the outskirts of a lenticular galaxy 800 million light-years away.

This is consistent with one of the formation models for intermediate-mass black holes that also explains why they're so tricky to find.

A 2004 paper proposed that the gravity of a dense star cluster could cause the stars inside it to fall towards the cluster's centre, forming a star as massive as thousands of Suns. This then would collapse under its own weight, forming an intermediate-mass black hole.

By the time one of these star clusters had created a black hole, it would have cleared the area within its gravitational reach, meaning there's no material left in its vicinity for it to devour, except for the rare and occasional stray star. This is what astronomers think J2150−0551 was caused by.

And there was still a possibility that J2150−0551 was something else - a neutron star inside the Milky Way that was cooling after being heated during an accretion outburst - slurping down material from another star. An accretion outburst large enough to cause this heating in a neutron star had not been detected in an all-sky survey that should have picked it up, but we needed a more conclusive ruling.

Hubble was pointed at the patch of sky in which J2150−0551 was seen to obtain deep, high-resolution imaging to confirm its location. These observations confirmed that the X-ray glow had not emanated from the Milky Way, but the star cluster 800 million light-years away.

These observations led the researchers to conclude that the flare was caused by an intermediate-mass black hole as it captured, shredded and accreted a small, main-sequence star around a third of our Sun's mass, and about 40 percent of its size.

They also found that the star cluster itself could be the core of a dwarf galaxy, stripped of most of its material due to gravitational interactions with the larger galaxy it borders.

Importantly, the finding reaffirms that star clusters orbiting more massive galaxies could be a prime location for finding these elusive intermediate-mass black holes.