On Sunday evening, September 27, you’ll get the chance to see a rare type of lunar eclipse that hasn’t happened since 1982. It is called a supermoon total lunar eclipse, and over the last 115 years there have only been five of them.

Supermoon is the colloquial name for a Moon that is both full (or new) and at its closest approach to Earth - a term called perigee. Sunday night’s supermoon will be just 356,877 km from Earth, which is a lot closer than its average distance of 384,472 km.

As a result, the Moon will appear about 13 percent larger than normal, reports Sky and Telescope. While that’s not a giant difference, it will certainly make the total lunar eclipse a sight worth seeing. So don’t miss it!

How and where to see it

If you’re on the west coast, the Moon will rise a little later, which means you’ll miss the first couple of stages.

But don’t worry. The main event - when the Moon is completely shrouded in Earth’s shadow - will still be visible. What’s more, the Moon will remain in shadow, completely eclipsed from the Sun, for exactly 1 hour and 12 minutes.

And if your skies are too cloudy to see the Moon there are a number of live broadcasts of the event so you don’t miss it, because the next one won’t come around until 2033:

During the time of total eclipse, the Sun’s light doesn’t reach the Moon directly but instead of turning black, the Moon will adopt a beautiful, deep, blood-red hue. So, if you look up on Sunday night and see a red moon, it’s not the impending apocalypse but just astrophysics at work.

Check out the map below from TimeandDate.com to see which parts of the eclipse you can see depending on where you are in the world: 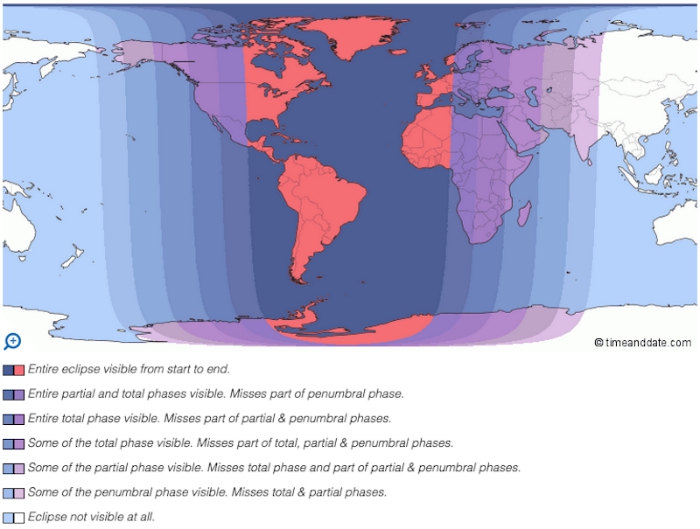 What you will see

A partial eclipse of the Moon will begin at 9:07 pm ET Sunday evening (1:07 am UTC or 11:07 am AEST Monday morning), which is when anyone looking into the night sky will begin to notice something odd is happening. During this first stage of the eclipse, the Moon will being to slowly disappear, growing into a ever-smaller crescent.

Again, the Moon will look like a crescent, but instead, this time the crescent will grow back to a full moon instead of shrinking into a blood moon. This image by Fred Espenak, with a detailed description of the eclipse on his website, shows what the different stages of a total lunar eclipse look like:

And here’s a handy break down, by Sky and Telescope, of each of the five stages and what time they will take place (in ET): 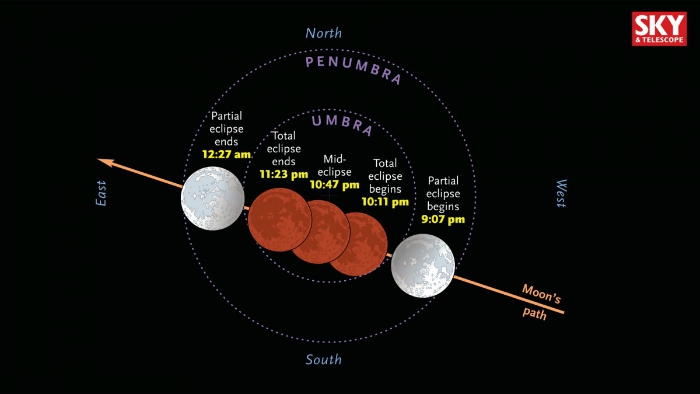 Check out the live Slooh broadcast, starting at 8:00 pm ET on Sunday (midnight UTC and 10:00 am AEST on Monday) below: