A few weeks ago, scientists at Ukraine's Vernadsky Research Base in Antarctica awoke to find their usually pristine white surrounds drenched in a shocking blood-red.

From the gory-looking images, you could be forgiven for wondering if there'd been some sort of horror-movie-style penguin massacre. The good news is that the real cause is far less dramatic; unfortunately, it still has dire implications.

Marine ecologist Andrey Zotov from the National Academy of Sciences of Ukraine, captured these images while conducting research at the Antarctic station. For such an epic mess, the culprits behind this dramatic redecoration are incredibly tiny. 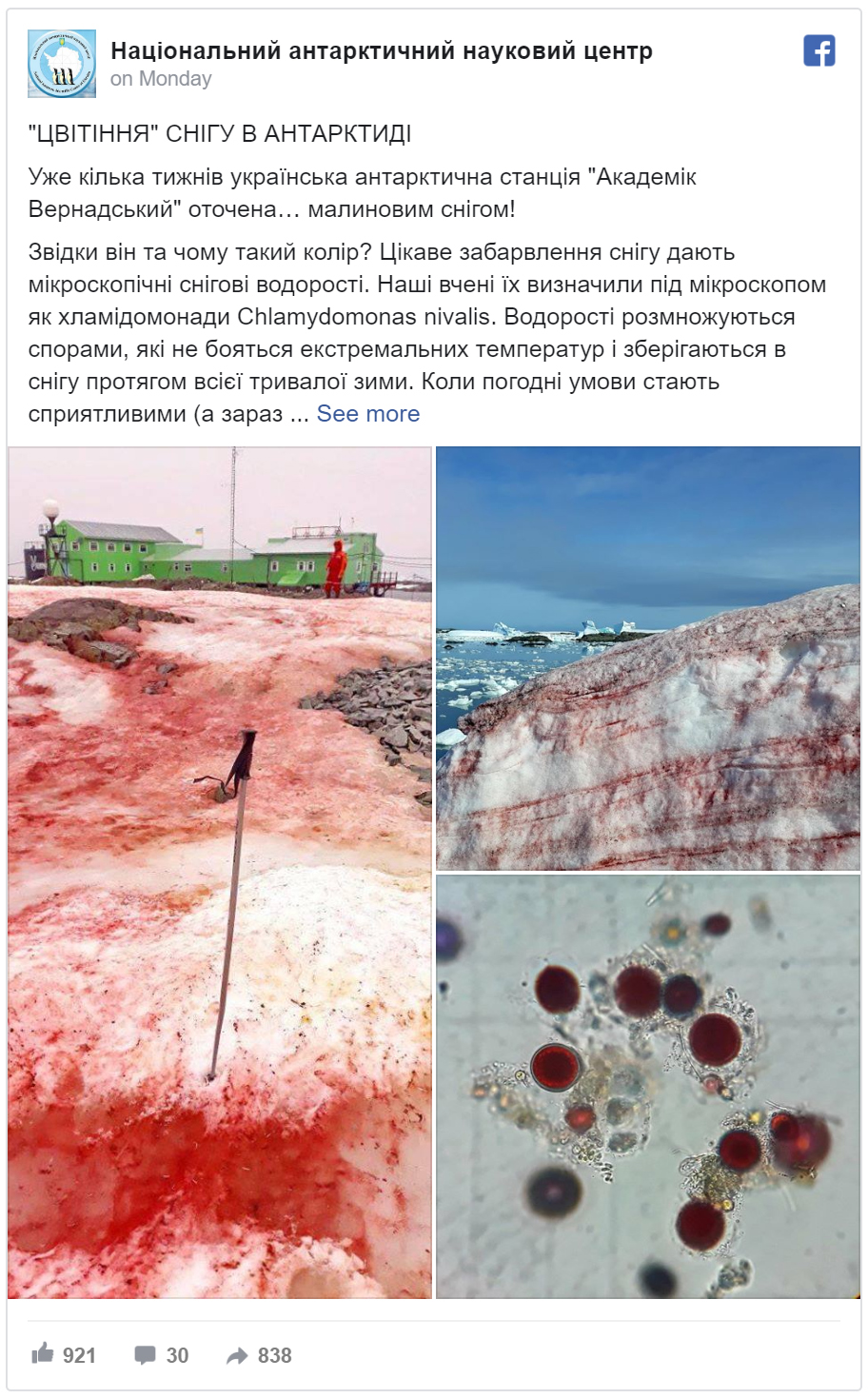 "Our scientists have identified them under a microscope as Chlamydomonas nivalis," said the National Antarctic Scientific Centre of Ukraine in a Facebook post.

These microscopic green algae (we'll get to why they look red in a moment), a type of single-cellular seaweed, are common in all icy and snowy regions of Earth, from the arctic to alpine regions.

They lie slumbering during the brutal winter, but once the sunlight warms enough to soften their crystallised world, the algae spring awake, making use of the meltwater and sunlight to rapidly bloom.

Young C. nivalis are green due to their photosynthesising chloroplasts and they have two tail-like structures called flagella, which they flail about to swim with. As they mature, they lose their mobility and develop unique adaptations to survive their extreme environment, including a secondary insulating cell wall and a layer of red carotenoids, which changes their appearance from green to orange to red.

"This layer protects the algae from ultraviolet radiation," explained the National Antarctic Scientific Centre of Ukraine on their Facebook page.

The carotenoids also help the algae to absorb more warmth, which in turn creates more meltwater for them to thrive in. This is all well and good for the algae and all the critters that eat them, like roundworms and springtails, but unfortunately there are other consequences, too.

"[The algal blooms] contribute to climate change," the centre stated.

A study in 2016 showed that snow algal blooms can decrease the amount of light reflected from the snow (also know as albedo) by up to 13 percent across one melt season in the Arctic.

"This will invariably result in higher melt rates," the researchers wrote.

In 2017 environmental scientists calculated that microbial communities, which include C. nivalis, contributed to over a sixth of the snowmelt where they were present in Alaskan icefields. Their experiments showed that areas with more meltwater led to the growth of 50 percent more algae and places with more algae melted further.

This Antarctic summer has certainly seen a lot more meltwater than usual. Temperature records keep tumbling, leading to rapid melting at a scale previously only seen in the Northern Hemisphere.

But at least C. nivalis infested snow… smells sweet? This phenomenon is also known as 'watermelon snow', although it is definitely not edible, because the algae are toxic to humans.