You probably wouldn't pick microscopic roundworms as the nurturing kind, but here's a fun fact for your day – these commonly studied nematodes squirt a kind of egg-milk out of their vulvas to feed their young.

Caenorhabditis elegans larvae that feed on this yolk milk grow more quickly than those that don't, a new study reveals. So just like with mammals that provide milk to their babies, this gives the next generation of worms a helpful boost in fitness with which to face their new world.

And it comes at a catastrophic cost to the mother.

Mother C. elegans are hermaphrodites, meaning they have both male and female sexual reproductive organs. Males exist too, but are extremely rare in the wild.

So while they can fertilize their eggs sexually, mother worms most often fertilize themselves. But their supply of self-sperm is limited; once they stop birthing young, their bodies commit to producing the yolk milk.

These microscopic, transparent wriggle-beasts lay more than their own body weight in eggs, which they excrete as just yolk or still fully intact egg cells (oocytes). But they make them by melting down and repurposing their own organs, including intestines and muscles. 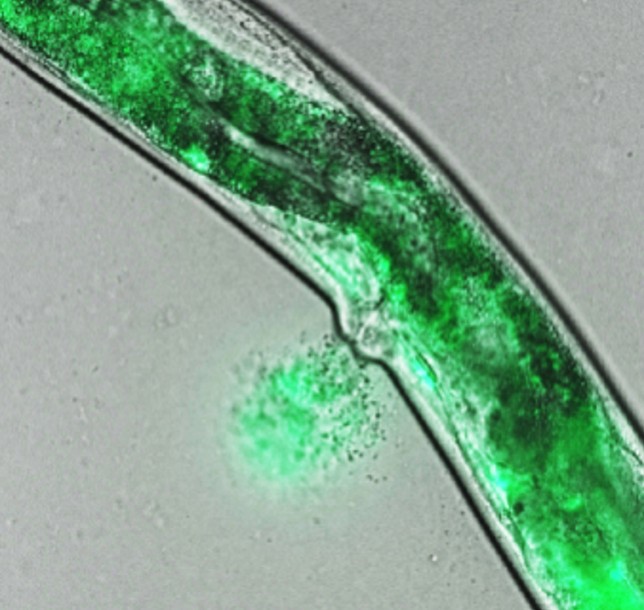 "The worms are destroying themselves in the process of transferring nutrients to their offspring," explains University College London bioscientist Carina Kern.

"And all those unfertilized eggs are full of milk, so they are acting like milk bottles to help with milk transport to feed baby worms."

This may seem surprising, but C. elegans is far from the only invertebrate species to provide highly nutritious excretions for their young. Jumping spiders do it too, and so do cockroaches. What's more, many other animals also sacrifice themselves for their young, including octopuses and salmon.

In experiments, Kern and colleagues demonstrated that larvae who fed on egg yolk grew more quickly than those that didn't, even after they returned to their usual food of E. coli.

The biochemical circuit that triggers the conversion from organs to eggs inside their mother, the insulin-like signaling pathway, is well known for shortening their lifespans. In fact, this pathway is one of the many reasons why C. elegans has been so well studied, because on an evolutionary level, it is well conserved across many animals, including humans.

Scientists have been using the mini soil worms to investigate aging, memory and other stranger things since the 1960s. They're so valued for research that they were the first multicellular animal to have their genome sequenced.

Kern and colleagues suspect the timing of the worm's yolk milk production may also coincide with when their colony starts depleting its food. In the wild, C. elegans is thought to rapidly reproduce as they conquer new territories, slurping up bacteria tasties within their dirt homes. They form large colonies that experience huge booms and busts in populations.

If the mother provides its offspring with a head start as food supplies dwindle, they're more likely to survive – an evolutionary process called kin selection.

Unfortunately, this impressive self-sacrifice also means exciting studies about C. elegans genes that massively extend the roundworm's lifespan may only work because they prevent this reproductive suicide.

But that doesn't mean we still can't learn a lot about aging from them. The researchers believe many of these worm aging mechanisms are still similar to those seen in other animals, so they hold insights into many diseases we all face.

This research was published in Nature Communications and an accompanying review in Frontiers in Cell and Developmental Biology.