Report: These 25 US Places Are at The Highest Risk of an Imminent Measles Outbreak

We're not even halfway through 2019, and already the US has confirmed more than 700 cases of measles. Thanks to a mix of factors – not least, non-medical exemptions from vaccination – some areas are at higher risk than others.

Researchers have put together a list of top 25 potential hotspots for outbreaks authorities need to target to limit the threat of what the World Health Organisation now regards as a global health crisis.

"There has been a resurgence of measles cases, among other vaccine preventable diseases, in the US and other countries in recent years," says Johns Hopkins University civil engineer Lauren Gardner.

"Measles, in particular, poses a serious public health threat due to the highly contagious nature of the disease." 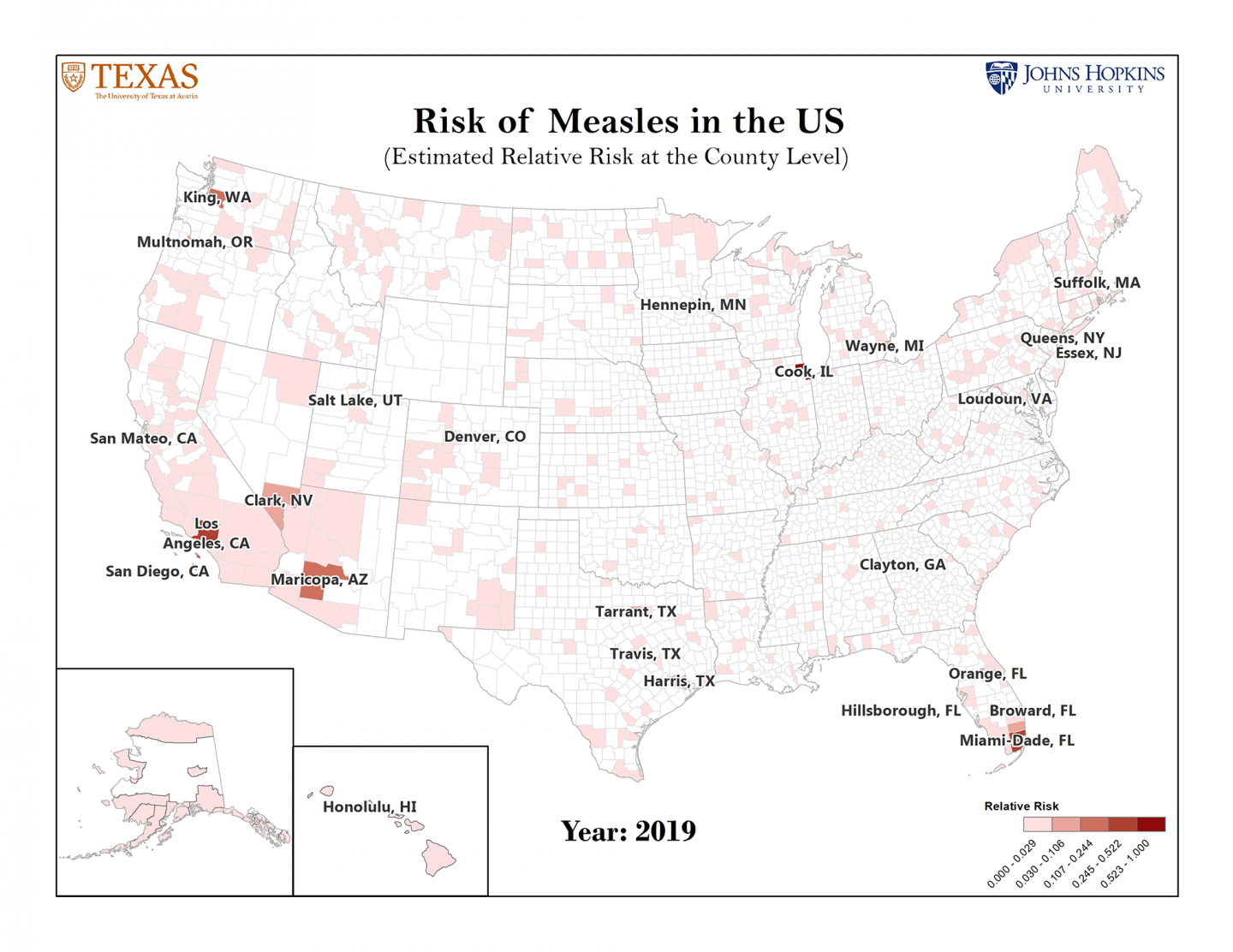 Vaccination has become the big political issue of the times, dividing communities and families alike. As a result, hesitation has spread, along with pockets of low immunity that act as convenient stepping stones for highly contagious illnesses.

Preliminary counts in the US are already numbering cases at 764 for 2019. Last year, the total figure of measles infections for the entire year topped out at just 372. In 2017 it was less than a third of that. While some local authorities are doing all they can to stem the tide, the US isn't the only country coping with epidemics. Across Europe, similar spikes have led to health authorities proposing fines for parents who don't vaccinate.

To identify which parts of the US are most at risk, researchers developed a model based on the county's population size, the rate of non-medical vaccination exemptions, their access to international air travel to other at-risk countries, incidence rates of infections in those destinations.

The model does a fair job of predicting many of the outbreaks already seen this year, including those in New York and Oregon.

But it also points out a number of counties at high risk of seeing measles cases rise in coming months, most of which lie adjacent to areas that have experienced outbreaks. These are:

"These counties should be targeted for enhanced surveillance and enhanced vaccination efforts," the researchers write in their report.

(You can also see an interactive map listing the top 50 rankings via this Johns Hopkins University link here.)

The top countries contributing to US outbreaks are India, China, Mexico, Japan, Ukraine, Philippines, and Thailand.

While the report focuses on the US, it's a growing problem the world needs to pay close attention to. Infectious diseases pay little attention to borders. And neither, it seems, does the politics of vaccination.

Last year, a religious proclamation by Indonesia's peak Islamic body was issued against what were assumed to be pig products in vaccines, interfering with the World Health Organisation's Global Vaccine Action Plan.

Working with religious leaders to accommodate concerns and provide accurate information has proven useful in the past. Similar pockets of community opposition in the US based on cultural beliefs also risk contributing to local epidemics, raising questions on how authorities might be able to work with local leaders to promote vaccination.

"The New York borough of Brooklyn is a perfect example with a large number of unvaccinated members of an orthodox Jewish community even though the overall county vaccination rate is not low," says philosopher and integrative biologist Sahotra Sarkar from the University of Texas.

The researchers plan to extend their models to diseases such as mumps and rubella in the future.

Being pre-armed with a map of potential stepping stones for infectious diseases other than measles could be vital in a world where pandemics are set to become more common.

There's no telling how high the tally for measles cases will go this year. If we're to have any hope of cutting it short, we're going to need more maps like this.

This research was published in The Lancet Infectious Diseases.