The rest of those atoms were forged by ancient stars merging and exploding billions of years after the formation of the Universe, and a tiny amount can be attributed to cosmic rays - high-energy radiation that mostly originates from somewhere outside the Solar System.

As astronomer Carl Sagan once said in an episode of Cosmos, "The nitrogen in our DNA, the calcium in our teeth, the iron in our blood, the carbon in our apple pies were made in the interiors of collapsing stars. We are made of starstuff."

To give you a better idea of where the ingredients for every living human came from, Jennifer A. Johnson, an astronomer at the Ohio State University, put together this new periodic table that breaks down all the elements according to their origin: 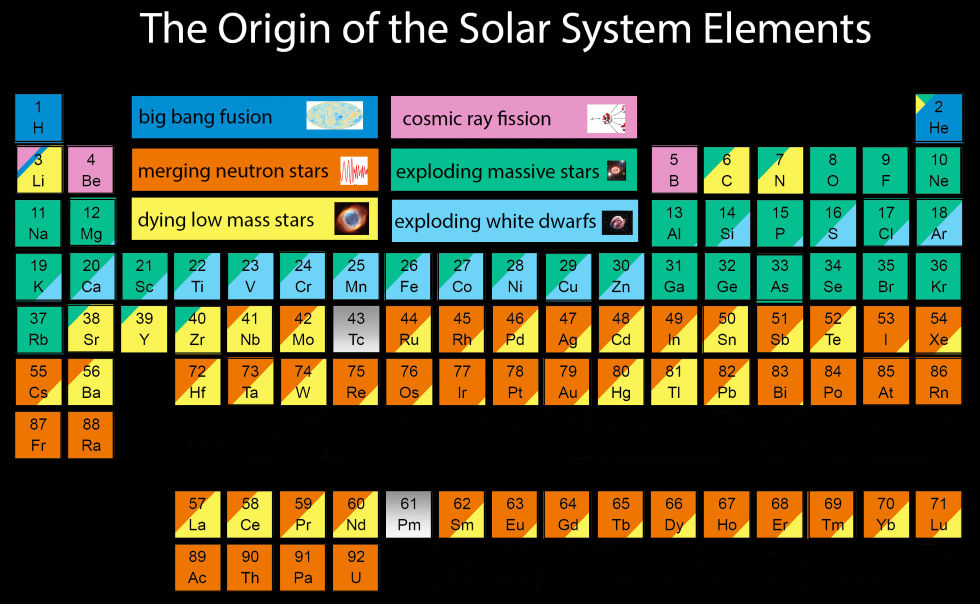 To keep things relevant for the human body, Johnson explains that she cut a number of elements from the bottom section.

The new periodic table builds on work Johnson and her colleague, astronomer Inese Ivans from the University of Utah, did back in 2008 - a project born out of equal measures of frustration and procrastination.

As you can see from the original version, it's been cleaned it up quite a bit since then: 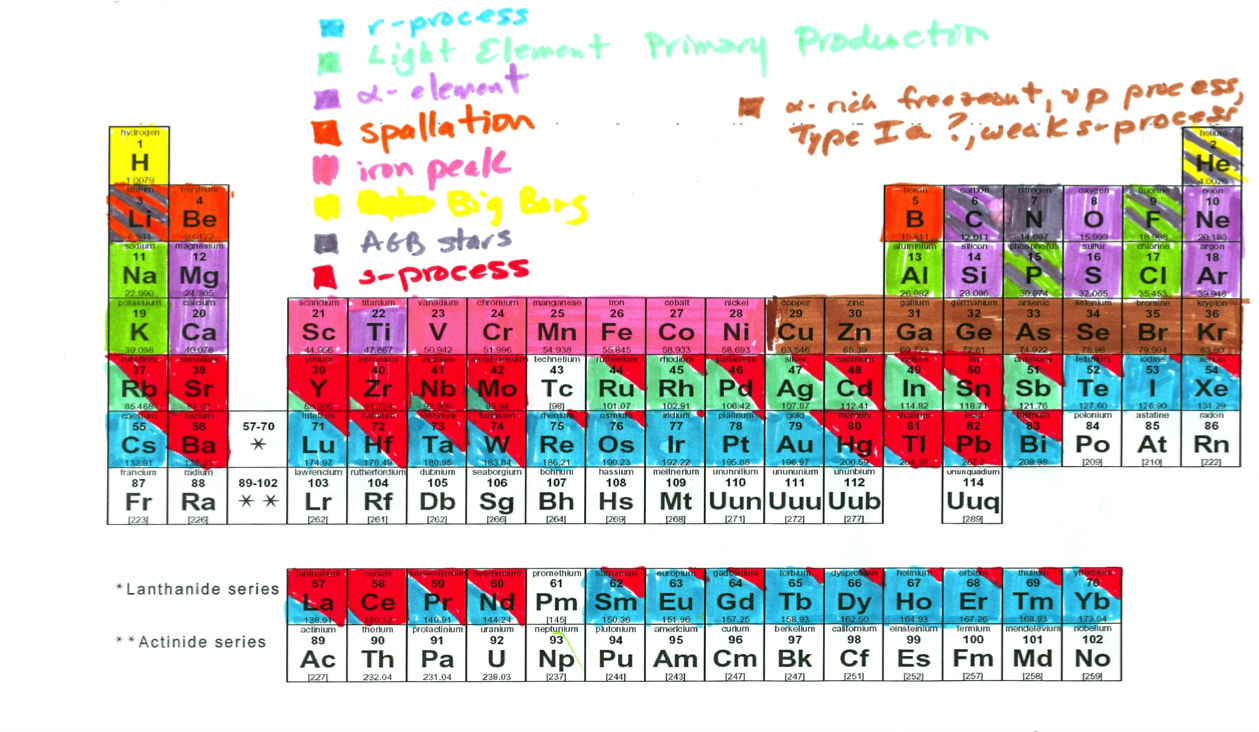 "This is what happens when you give two astronomers, who are tired of reminding everyone about which elements go with which process [on] a periodic table, a set of markers, and time when they should have been listening to talks," Johnson admits.

The periodic table works by identifying the six sources of elements in our bodies, and breaks them down into the processes in the Universe that can give rise to new atoms: Big Bang fusion; cosmic ray fission; merging neutron stars; exploding massive stars; dying low mass stars; and exploding white dwarf.

The way the corresponding colours fill up the boxes of elements shows roughly how much of that element is the result of the various cosmic events.

So you can see that elements like oxygen (O), magnesium (Mg), and sodium (Na), resulted from gigantic explosions of massive stars called supernovae, which occur at the end of a star's life, when it either runs out of fuel, or accumulates too much matter.

The incredible amount of energy and neutrons this releases allows elements to be produced - a process known as nucleosynthesis - and distributed throughout the Universe.

Old favourites like carbon (C) and nitrogen (N), on the other hand, exist mostly thanks to low-mass stars ending their lives as white dwarfs.

Strange elements boron (B) and beryllium (Be), and some isotopes of lithium (Li) are unique in their origins, because they're the result of high-energy particles called cosmic rays that zoom through our galaxy at close to the speed of light.

Most cosmic rays originate from outside the Solar System, and sometimes even the Milky Way, and when they collide with certain atoms, they give rise to new elements.

Interestingly, lithium is part of the reason why Johnson decided to distribute this new periodic table in the first place. If it's giving you a serious case of deja vu, it's because there's a similar version on Wikipedia:

But, as Johnson explains, the Wikipedia version is unclear in some places, and just plain wrong in others.

She says the "large stars" and "small stars" in the Wikipedia version don't make much sense, because nucleosynthesis has nothing to do with the radius of the stars, so we have to assume they mean "high-mass stars" and "low-mass stars", respectively.

"But sometimes, white dwarfs that are in binary systems with another star get enough mass from the companion to become unstable and explode as so-called Type-Ia supernovae. Which 'supernova' is being referred to in the Wikipedia graphic is not clear."

There's also the problem with lithium:

"The information for Li is incorrect. [The isotope] 6Li is indeed made by cosmic rays hitting other nuclei and breaking them apart. But most of the far more common 7Li isotope is without question made in low-mass stars and spewed out into the Universe as the star dies. Some 7Li is also made in the Big Bang, and a small fraction by cosmic ray fission."

Head over to Johnson's blog to access a higher resolution version of the periodic table, and if you need a colour blind-friendly version, she's got you covered: 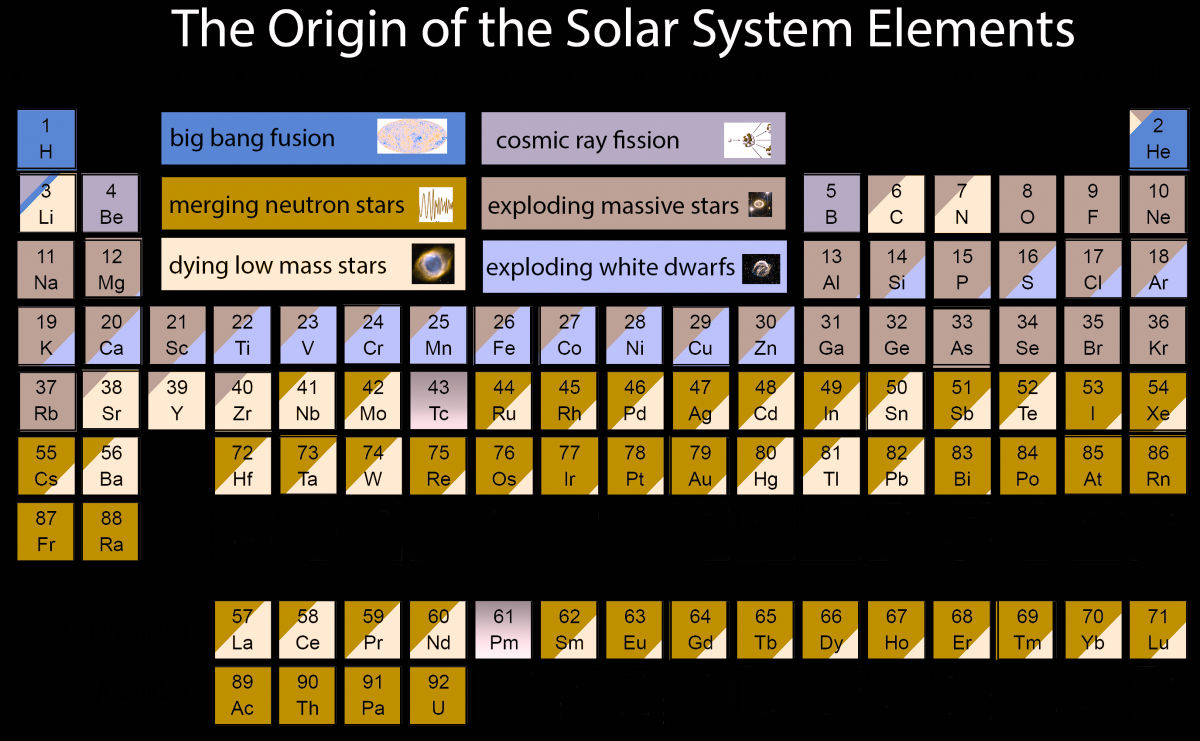