Astronomers Have Spotted a Massive 'Bulge' in Venus' Atmosphere

A massive bow-shaped 'bulge' has been spotted in the upper atmosphere of Venus, and astronomers are trying to explain how it could withstand the gush of sulphuric acid clouds that are spinning faster than the planet itself.

Their best guess is that the strange, 10,000-km (6,214-mile) structure is the result of what could be the largest gravity wave ever witnessed in the Solar System, but there’s one problem - scientists didn’t think gravity waves could form this high up in the atmosphere.

The massive wave that you can see in the infrared image above, stretching from Venus’ north to south pole, was spotted by Japan’s Akatsuki probe back in December.

For four days straight, it dominated the planet’s incredibly hot and dense atmosphere at about 65  km (40 miles) above the surface - and stayed eerily still, even in the face of Venus’ legendary 359 km/h (223 mph) winds.

But then it vanished from above the clouds about as promptly as it had appeared.

As the spacecraft waits patiently for the wave to reappear - Europe’s Venus Express spacecraft spotted a number of similar structures during its 10-year mission - scientists are now tasked with explaining the peculiar phenomenon.

The team behind the Akatsuki probe says all the evidence is pointing towards the bulge being a massive gravity wave - something that occurs when a fluid material, such as a liquid, gas, or plasma, is jostled out of a position of equilibrium.

They suggest that, given the intense speed and shape of Venus’ sulphuric acid winds, the only structure that could withstand all that is a massive gravity wave - despite the fact that no one had predicted that they could grow this big.

For a bit of background into just how unlikely it is for something this big to survive in Venus’ atmosphere, the fiery planet boasts thick clouds of sulphuric acid that move in a westerly direction faster than the planet itself rotates on its axis.

And as fast as those acid clouds are, the planet’s rotation is painfully slow - one day on Venus lasts longer than it takes for the planet to complete its orbit of the Sun.

This phenomenon is known as super-rotation and it causes Venus’ entire upper atmosphere to appear like a blur of speeding clouds - which makes a 10,000-km-long wave chilling stubbornly on the cloud tops something of a surprise.

So how did it this apparent gravity wave form?

First off, gravity waves are entirely different from gravitational waves, so don’t get the two mixed up.

Gravitational waves are ripples in spacetime that were directly detected in early 2016 - the first time since Einstein predicted them over 100 years ago.

Gravity waves, on the other hand, are far more simple - we have them here on Earth, and they’re basically just a ripple or disturbance in the density of a planet’s atmosphere.

As Emma Grey Ellis explains for Wired, if wind is rushing over an uneven surface - such as a jagged mountain range, or even a turbulent ocean - tension is created between air particles wanting to move up, and gravity wanting to push them back down. 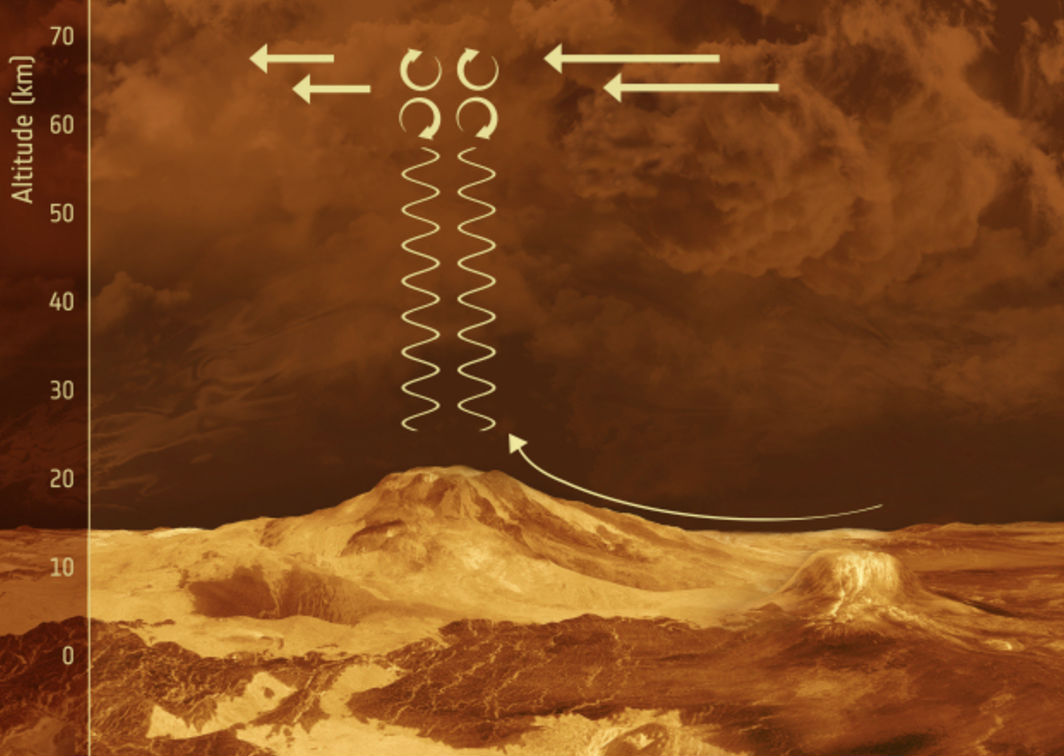 Illustration of surface winds on Venus being pushed up by a mountain, causing tension in the upper atmosphere that slows the high-altitude winds. Credit: ESA

This jostling for equilibrium is what causes gravity waves on Earth - like over the Andes in Patagonia - and the Akatsuki team says it’s no coincidence that this phenomenon keeps appearing over Venus’ highlands.

They suggest that surface winds on Venus triggered the formation of the massive gravity wave when they pummelled into the 4,500-metre-high (14,764 feet) Aphrodite Terra mountain range that looms near the planet’s equator.

"We suppose that highlands are a key to generating the stationary gravity waves, because most of the bows - and we have found more than 15 bows so far - have appeared above the highlands at their centres," one of the researchers, Makoto Taguchi from Rikkyo University, told Ellis.

While the researchers are confident in their explanation, many questions remain, including the mystery of how the gravity wave got so high above the surface in the first place.

The team hopes to address that question with further observations of the planet, and with that insight, we might finally be able to answer an even bigger question - how did Venus' crazy super-rotation occur?

"We don’t entirely understand how the atmosphere comes to this super-rotating state, but gravity waves are one contributing factor," Gerald Schubert, a geophysicist at the University of California, Los Angeles, who wasn't involved in the study, told Wired.

"The feature probably arising at least in part by gravity waves will tell us more about the role they play in the atmospheric dynamics."