Nobody likes shattering their phone display and having to operate the device by running fingers over shards of jagged glass, but a new, malleable touch sensor could enable a lot more than just unbreakable screens.

Canadian researchers have invented a soft and flexible touch-sensitive material that could see you folding or rolling up your smartphone or tablet when you're not using it, or let us wear adaptive health sensors that conform to our bodies like an artificial skin.

"It's the first transparent touch sensor that is still able to detect a touch while being actively deformed," engineer Mirza Saquib Sarwar from the University of British Columbia told CBC News.

Malleable displays have been a focus of intense scientific interest for years, with researchers looking to make smartphones that can bend, touchscreens that can can flex, and even TVs that can be rolled up like a newspaper.

But the material developed by Sarwar and his team – comprising a highly conductive gel sandwiched between layers of silicone – is actually a hybrid effort, bringing together numerous touch functionalities in one pliant form. 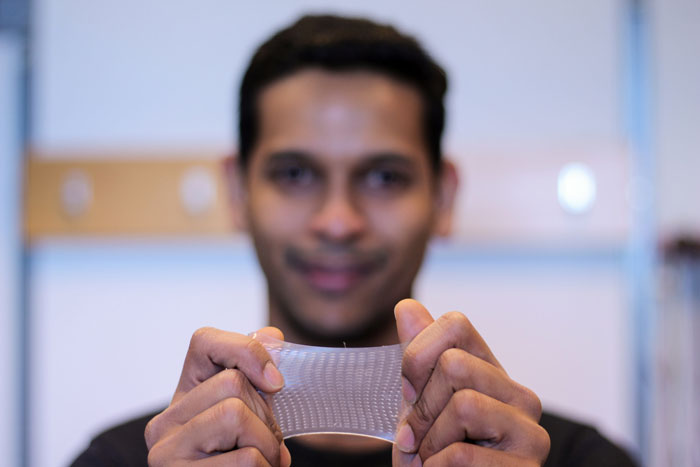 "There are sensors that can detect pressure, such as the iPhone's 3D Touch, and some that can detect a hovering finger, like Samsung's AirView," Sarwar explains in a press release.

"There are also sensors that are foldable, transparent, and stretchable. Our contribution is a device that combines all those functions in one compact package."

It's one thing to make a malleable device that registers touch when it's deformed, but it's more of a challenge to make the same material detect fingers that aren't even in contact with the device.

To make this possible, the team used hydrogel electrodes that are embedded in the silicone layers, which project an electric field above the sensor.

In testing with the team's 5 cm x 5 cm (2 inch x 2 inch) prototype, the electrodes enabled the sensor to register a finger hovering a few centimetres above the material, to make a kind of virtual touch.

While the current prototype is only small, the researchers say it would be easy and affordable to fabricate larger sensors for bigger devices, or to make malleable touch sensors for considerably more expansive settings.

"It's entirely possible to make a room-sized version of this sensor for just dollars per square metre, and then put sensors on the wall, on the floor, or over the surface of the body – almost anything that requires a transparent, stretchable touch screen," says Sarwar.

"And because it's cheap to manufacture, it could be embedded cost-effectively in disposable wearables like health monitors."

The team envisages room-sized touch-sensors being used on floors, so that venues could to tell how many people are standing in a certain area – or in elderly care, the technology could alert staff if the gel layer has detected a person falling over.

Looking further ahead, the researchers think the material could even make future robots safer for humans to be around, by covering them in a soft, yielding coating – not just as cushioning, but as a sensitive layer that would alert them to the presence of people.

"Currently, machines are kept separate from humans in the workplace because of the possibility that they could injure humans," says one of the team, John Madden.

"If a robot could detect our presence and be 'soft' enough that they don't damage us during an interaction, we can safely exchange tools with them, they can pick up objects without damaging them, and they can safely probe their environment."

The research is described in Science Advances.