This Runaway Star Is Zipping Through Space at Over 160,000 Kilometers Per Hour

Not all stars are happy to just hang around, orbiting the galactic center with all the other stars. Some stars go rogue, punted out across the Milky Way with significant force. These are the runaway stars, and we can trace their trajectories to understand violent events that can take place in the Universe.

One such star, and one of the more famous, is Zeta Ophiuchi. Located around 440 light-years from Earth in the equatorial constellation of Ophiuchus, it's also one of the oddest stars in the sky.

Not only is it unusually fast, with a velocity somewhere around 30 to 40 kilometers (roughly 20 to 25 miles) per second, but it's an odd kind of star to see whooshing through space.

Zeta Ophiuchi is a main-sequence star; that is, one that is still fusing hydrogen into helium in its core. And it's a hot, massive O-type star: around 20 times the mass of the Sun, glowing blue with its intense heat.

Such stars also have relatively brief lives; Zeta Ophiuchi is about halfway through its projected 8-million-year main sequence lifespan.

That means they're not very common in the Milky Way; but such stars also tend to be born, and spend their lifetimes, in groups known as associations.

Yet Zeta Ophiuchi, zooming through space, is all alone, which raised questions about where it came from, and how it got into its current predicament.

Scientists now believe that Zeta Ophiuchi was kicked across space by the supernova explosion of a binary companion star. A pulsar, also zooming through space, has a path that would have intersected with that of Zeta Ophiuchi about a million years ago.

This suggests that the pulsar was the star that went supernova, sending both stars flying. 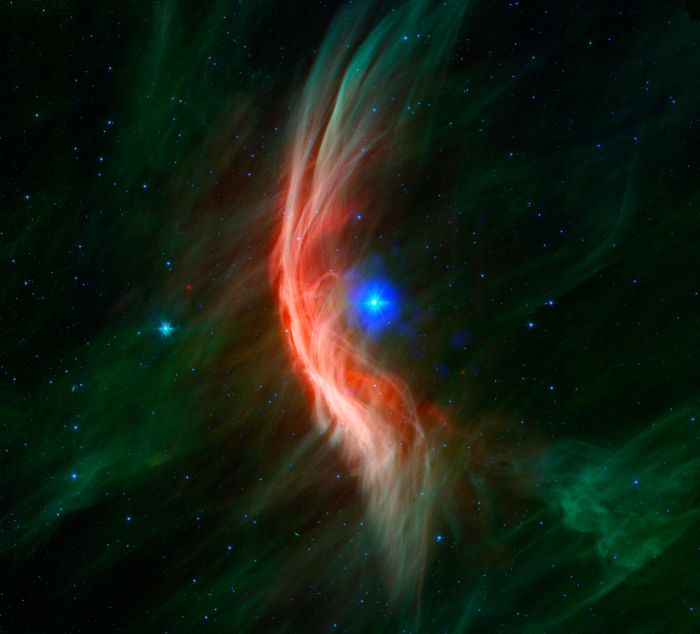 Above: A composite optical, infrared, and X-ray image of Zeta Ophiuchi.

Because Zeta Ophiuchi is so well known, we do know a fair bit about it. For example, images show a colossal bow shock in the thick cloud through which the star is traveling. This is created by material blowing from the star and colliding with the gas.

And X-ray emission around the star was detected in observations from Chandra in 2016 – thermal emission, created by shock-induced heating.

A new study led by computational astrophysicist Samuel Green from the Dublin Institute for Advanced Studies in Ireland has delved into the multi-wavelength data to see if bow shock dynamics can explain the observed cloud, as well as the thermal emission. That includes observations across optical, infrared, radio, and X-ray wavelengths.

They conducted simulations and found that their results don't match the observations. The brightest X-radiation in the Chandra data is emitted from a bubble that surrounds the star. In the simulations, the brightest X-rays were in the bow shock itself.

This suggests that something is missing either in the simulations or our understanding of the strange star and its environment.

Future simulations will throw more physical processes into the mix or will be conducted at higher resolutions to better model the turbulence involved.

In terms of other remarkably fast stars, the fastest runaway main-sequence star discovered yet is S5-HVS1, punted across the galaxy at a velocity of around 1,700 kilometers (roughly 1,056 miles) per second by an interaction with Sagittarius A*, our galaxy's supermassive black hole.

The fastest dead stars are a pair of white dwarfs traveling at 2,200 kilometers (around 1,370 miles) per second, kicked by a double-detonation supernova.

The team's paper has been accepted in Astronomy & Astrophysics. A large version of the composite optical, X-ray, and infrared observations of Zeta Ophiuchi can be found on the Chandra website.