The Arctic is not in a good way. Its oldest, thickest sea ice is breaking. Strange lakes punctuate its landscape. The very chemistry of its water is changing.

Things could be about to get worse. New research has uncovered evidence of a vast reservoir of heated water building up underneath the Arctic Ocean and penetrating deep into the heart of the polar region, where it threatens to melt the ice frozen on top. And maybe a lot of it.

"We document a striking ocean warming in one of the main basins of the interior Arctic Ocean, the Canadian Basin," explains oceanographer Mary-Louise Timmermans from Yale University.

Timmermans and her team analysed temperature data on the Canada Basin taken over the last 30 years, and found that the amount of heat in the warmest part of the water had effectively doubled in the period 1987 to 2017. 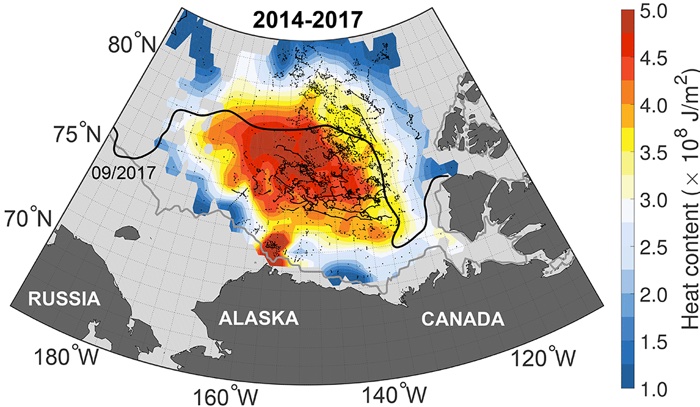 The basin, which sits to the north of Alaska, is made up of mixed layers of ocean water, with cold, fresh water flowing at the surface, sitting on top of a body of warmer, saltier ocean trapped beneath it.

That dynamic has long been the case, but it's the rapidly heating conditions of the warmer reservoir below that has scientists concerned.

"Presently this heat is trapped below the surface layer," Timmermans says.

"Should it be mixed up to the surface, there is enough heat to entirely melt the sea-ice pack that covers this region for most of the year."

According to the researchers, the warmer submerged waters have been 'archiving' heat due to "anomalous solar heating" of surface waters in the northern Chukchi Sea, which feeds the Canada Basin.

Basically, as sea ice seasonally and increasingly melts in the Chukchi Sea, open water gets exposed to the heat of sunlight, warms up, and is then driven northwards by Arctic winds – a current phenomenon called the Beaufort Gyre.

As this heated water travels to the Arctic, the warmer waters then descend below the colder layer of the Canadian Basin – but the amount they've heated up in the past three decades could represent "a ticking time bomb", the researchers warn.

"That heat isn't going to go away," one of the team, oceanographer John Toole from the Woods Hole Oceanographic Institution, told CBC.

"Eventually … it's going have to come up to the surface and it's going to impact the ice."

While the researchers don't think there's any immediate threat, strong winds mixing the colder and warmer water layers – or an increase in salinity, driving the warmer water upwards – could severely impact Arctic ice.

And even if those outcomes don't result, the temperature trajectory already seen could be affecting ice coverage more subtly, although nobody knows the exact ramifications yet.

"It remains to be seen how continued sea ice losses will fundamentally change the water column structure and dynamics," the authors explain in their paper, although they note in the coming years the excess heat "will give rise to enhanced upward heat fluxes year-round, creating compound effects on the system by slowing winter sea ice growth."

More research is needed to calculate just how serious this situation is, but there's no denying these mechanisms are all part of a much bigger problem – and one that isn't going away.

"We're seeing more and more open water as the sea ice retreats in the summertime," Timmermans told the Canadian Press.

"The Sun is warming up the ocean directly, because it's no longer covered by sea ice."