On August 21 last year, the US came to a standstill to watch the incredibly rare alignment of the Moon sliding in front of the Sun, completely blocking its rays.

But for a team of scientists, the anticipation of this total solar eclipse was perhaps even more intense as they waited to see the shapes in the aura of plasma flaring out from behind the Moon.

This is called the corona, and a week earlier scientists from private research company Predictive Science Inc. had published a painstakingly constructed model of what they thought it would look like.

"Because you work with the model so much and see the prediction so many times, it's burned into your brain. There's a lot of anxiety because if you're totally wrong, it's a bit embarrassing."

Since 1994, the team at Predictive Sciences has conducted a dozen other such predictions, refining their technique and gaining access to ever better technology. Even so, accurately modelling the solar corona is no small feat.

But it's worth doing. The corona is much dimmer than the incredibly bright light of the Sun, so it's only during a total eclipse - when the Moon blocks most of the Sun's brilliance - that its deepest layers can be resolved. To do this, astronomers typically stack dozens of photographs of the region to reveal the corona's complex details. 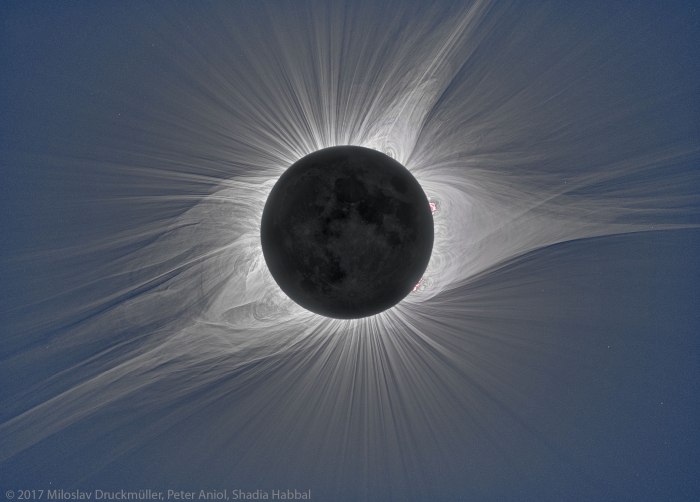 These details are created by the Sun's ever-changing magnetic field, which is also responsible for the solar flares and coronal mass ejections that can cause solar storms here on Earth. These massive storms of charged particles can disrupt communications and navigation systems and even blow out power grids.

So being able to predict space weather via the Sun's corona would be a pretty powerful tool. But because total solar eclipses are the only time we can see the complex inner corona, it's the only time scientists can compare their modelling tools to the real thing to gauge accuracy.

The simulation Predictive Science ran for the August 2017 solar eclipse was their most complicated yet. Thousands of processors across several supercomputers took two days of real time to calculate each simulation.

Because the Sun rotates once every 27 days and its magnetic field constantly changes, there's a time limit as to how far ahead this simulation can be run.

If the scientists run their simulation too early, the data will be out of date by the time the eclipse rolls around. So it needs to be conducted within about 10 days before the eclipse is due to take place.

In their simulations, the team added something new: calculations for coronal heating. Astronomers still don't know why the corona is so much hotter than the inner photosphere's 5,800 Kelvin, coming in at between 1 and 3 million Kelvin.

One theory is that electromagnetic waves called Alfvén waves propagating outwards are responsible for the heating, so the team included Alfvén wave data. 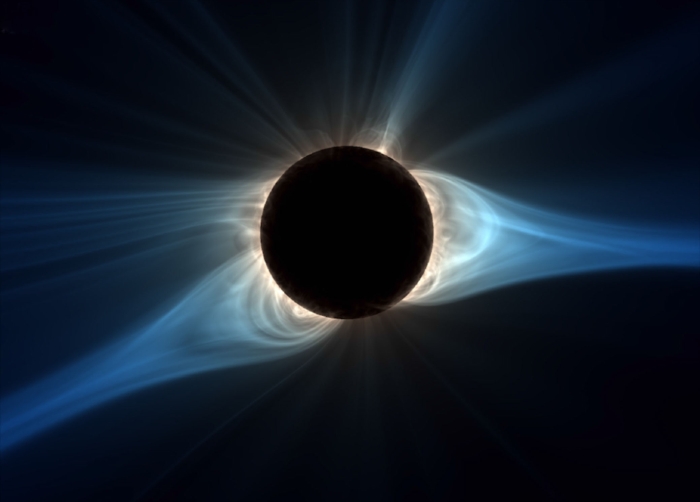 The prediction they came up with looks amazingly similar to photographs of the eclipse. It's not as detailed, missing many of the finer structures, but it includes the three huge, petal-shaped "helmet" streamers in the right location.

"In some sense, the model's performance tells us the new heating model is headed in the right direction," Mikić said. "It's certainly showing improved results. We should pursue and refine it further."

They missed one thin streamer on the upper right side of the Sun because the magnetic field changed during data collection, and the Solar Dynamics Observatory, in orbit around Earth, can only observe the side of the Sun facing us. We can't see what's happening on the far side.

That's not likely to change any time soon. But we may soon gain a deeper understanding of the dynamics inside the corona. NASA's Parker Solar Probe, which launched earlier this month, will be flying inside the Sun's outer corona to collect more comprehensive data than ever before.

It's due for its first perihelion in November this year.

Meanwhile, Mikić and his team will be using their results to refine their techniques before the next total Solar eclipse, taking place on 2 July 2019.

The team's research has been published in the journal Nature Astronomy.