The polarization visualized on the direct image of M87*. (EHT Collaboration)
SPACE

The goalposts of science are always shifting. An achievement is never absolute - each new discovery is the doorway to a cascading series of other discoveries in our quest to understand the Universe. The supermassive black hole M87* is no exception.

This black hole is the subject of humanity's first-ever direct image of the shadow of a black hole - an absolutely stunning achievement many years and hundreds of scientists in the making.

Now, scientists with the Event Horizon Telescope collaboration have carefully analyzed that glowing ring of golden light from 55 million light-years away, and found evidence of strong polarization - the twisting of the orientation of the light waves, generated by powerful magnetic fields in the region around the black hole.

"This work is a major milestone: the polarization of light carries information that allows us to better understand the physics behind the image we saw in April 2019, which was not possible before," said astronomer Iván Martí-Vidal of the University of Valencia in Spain.

"Unveiling this new polarized-light image required years of work due to the complex techniques involved in obtaining and analyzing the data."

Polarization is a well known and understood behavior of electromagnetic radiation. As a particle of light travels through space, its oscillations are oriented in a certain direction. If it is scattered by, for example, dust in the interstellar medium, or rotated by a magnetic field, its orientation can change; we call that change polarization.

It's a property that we can take advantage of technologically - you've probably heard of polarized screen protectors and sunglasses - but it can also, when seen emitting from cosmic objects, tell us something about the space environment.

For M87*, that something is the shape and structure of the magnetic field in the torus of gas swirling immediately around the outside of the black hole's event horizon. The polarization of the light seen in the image of M87*, the team found, could only be explained by a very strong magnetic field.

"The observations suggest that the magnetic fields at the black hole's edge are strong enough to push back on the hot gas and help it resist gravity's pull," said astronomer Jason Dexter of the University of Colorado Boulder.

"Only the gas that slips through the field can spiral inwards to the event horizon."

This could be key to understanding a phenomenon that has long proven to be a puzzle - relativistic black hole jets.

Nothing that we can currently detect can escape a black hole once it's passed the critical proximity threshold, but not all the material in the accretion disk swirling into an active black hole inevitably ends up beyond the event horizon. A small fraction of it somehow gets funneled from the inner region of the accretion disk to the poles where it is blasted into space in the form of jets of ionized plasma, at speeds a significant percentage of the speed of light.

Astronomers think that the black hole's magnetic field plays a role in this process. The magnetic field lines, according to this theory, act as a synchrotron that accelerates material before launching it at tremendous speed. 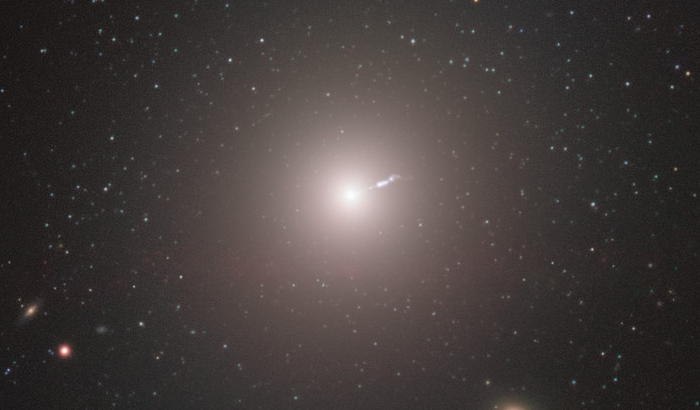 VLT image of the galaxy M87, showing the black hole jet towards the right. (ESO)

We know M87* is shooting out these relativistic jets at 99 percent of the speed of light. The glowing gold ring we can see in the image of M87* is this inner edge of the accretion disc, allowing scientists a unique window into this process.

"We are now seeing the next crucial piece of evidence to understand how magnetic fields behave around black holes, and how activity in this very compact region of space can drive powerful jets that extend far beyond the galaxy," said astronomer Monika Mościbrodzka of Radboud University in the Netherlands.

Future analysis, the team said, would focus on the magnetic fields around the jet-launching region near M87*'s event horizon.

The research has been published in The Astrophysical Journal Letters here and here.